Following my earlier post, that Jeffery Deaver is to pen the next James Bond novel in 2011, it is good to see that he will be in the country during July 2010, discussing and signing copies of his new book ‘The Burning Wire’. 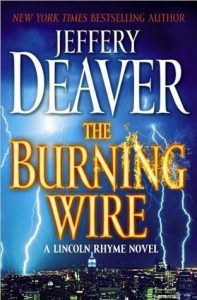 New York is being held to ransom.

Manhattan’s electricity grid has been the victim of a horrific attack …and more are planned.

While the FBI and Homeland Security try to determine who’s behind the carnage, Lincoln Rhyme and Amelia Sachs race to decode the forensics in order to prevent the next assault. But all is not what it seems. Electricity can be as lethal as it is vital, and Lincoln Rhyme soon finds he’s up against a merciless killer with a unique weapon — one that can be found in everyone’s home and office.

And in the meantime, one of the few criminals to have ever slipped Rhyme’s net is under surveillance in Mexico. The deadly assassin known as the Watchmaker has set his murderous sights on innocent victims, whose identity is as yet unknown

Lincoln Rhyme must race against the clock, juggling the two investigations, as they hurtle headlong toward their deadly outcomes.

Jeffery will be appearing countrywide, at various branches of Waterstones. Some events are free of charge, others carry a modest charge, visit Waterstones for further details.