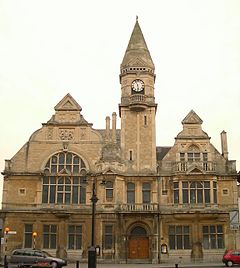 2012 sees the inaugural Trowbridge Arts Festival, run and organised by a group of volunteers, who are passionate  and dedicated to promoting all genres of the arts and the wealth of local heritage, in this, the county town of Wiltshire.

There is a full programme of events, which is still being added to on an almost daily basis, running at various venues throughout the town, between 14th – 30th September 2012.

Official launch day is Saturday 15th September 2012. Join the Town Crier and Mayor as a peal from the twelves bells of St James heralds the start of Trowbridge’s first ever arts festival and a host of FREE events across the town centre.  Make sure you can say you were there at the start of the very first festival! with events starting from 10am and the official launch taking place at 12 noon.

As with the Wells Festival Of Literature, in October 2012, Trowbridge is very close to my home town (closer in fact), only in the opposite direction. My interest with the festival lies in the events of Thursday 20th September 2012, when the newly refurbished library, which now boasts an atrium, is host to an evening with crime writers Mark Billingham and Val McDermid, who will be discussing their respective careers in writing, what particularly encouraged them to write and where the inspiration for their ideas and storylines comes from.

Mark Billingham, is best known for his series of some 10 books, featuring the character of  London based detective, Tom Thorne. Although I am sure that much of the discussion with Mark will centre around this hugely popular character, his latest book is in fact a stand alone novel, which is only the second he has written and which, I am sure, will claim some of the attention.

‘Good As Dead’ The Hostage Police officer Helen Weeks walks into her local newsagent’s on her way to work. Little does she know that this simple daily ritual will change her life forever. It’s the last place she expects to be met with violence, but as she waits innocently at the till, she comes face to face with a gunman. The Demand The crazed hostage-taker is desperate to know what really happened to his beloved son, who died a year before in youth custody. By holding a police officer at gunpoint, he will force the one man who knows more about the case than any other to re-investigate his son’s death. That man is DI Tom Thorne. The Twist While Helen fights to stay alive and the body-count rises,Thorne must race against time if he is to bring a killer to justice and save a young mother’s life.

Three couples meet around the pool on their Florida holiday and become fast friends. But on their last night, their perfect holiday takes a tragic twist: the teenage daughter of another holidaymaker goes missing, and her body is later found floating in the mangroves.
When the shocked couples return home, they remain in contact, and over the course of three increasingly fraught dinner parties they come to know one another better. But they don’t always like what they find: buried beneath these apparently normal exteriors are some dark secrets, hidden kinks, ugly vices…

Then, a second girl goes missing.

Could it be that one of these six has a secret far darker than anybody can imagine?

A brilliantly plotted, utterly gripping thriller about the danger of making friends on holiday, Rush of Blood is Mark Billingham’s most ambitious and accomplished work to date.

Val McDermid has, over the many years of her very successful writing career, offered us several series of titles, the most recent of which features the characters, clinical psychologist Tony Hill and detective Carol Jordan. It is however, probably recognised that the mainstay of Val’s success, has been her unique ability to create a suspenseful storyline, over and over again, in her growing portfolio of stand alone titles. Certainly I can envisage there being some time spent discussing ‘Hill and Jordan’s’ latest case:

There is one serial killer who has shaped and defined police profiler Tony Hill’s life. One serial killer whose evil surpasses all others. One serial killer who has the power to chill him to the bone: Jacko Vance. And now Jacko is back in Tony’s life. Even more twisted and cunning than ever before, he is focused on wreaking revenge on Tony – and DCI Carol Jordan – for the years he has spent in prison. Tony doesn’t know when Jacko will strike, or where. All he knows is that Jacko will cause him to feel fear like he has never known before? and devastate his life in ways he cannot imagine…

However, I can safely predict that Val isn’t going to get away without some discussion about her latest, just released, stand alone story….

It is every parent’s worst nightmare.  Stephanie Harker is travelling through the security gates at O’Hare airport when she is taken into a perspex box having set off the metal detectors.  Made to wait outside, five-year-old Jimmy is led away, by hand, by a uniformed officer. Stephanie’s panic and shouts lead security to believe she is a threat, and she is tasered brutally to the ground amidst her screams of protest while Jimmy disappears into the distance unnoticed by anyone but her.

However, when Stephanie has a chance to tell her story to the FBI, it becomes clear that everything is not as it seems.  Unanswered questions surround Jimmy’s background and why someone would want to abduct him.  But it is Stephanie’s close friendship with reality TV star Scarlett Higgins that appears to lie at the bottom of a tale of death, deception and the extraordinary lengths to which a parent will go to protect their child.

Both Val and Mark have also had the good fortune to see their popular characters serialised for television, so there will be no shortage of discussion material on the night.

At just £3 a ticket, this is surely set to be an interesting and engrossing evening and one which I shall be doing my level best to attend.