‘TUPPENCE TO SPEND‘ by LILIAN HARRY 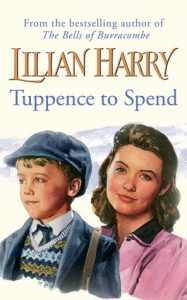 It was almost the end of August. Sammy had been given the letter at school and had almost forgotten about it, but his teacher had said that the letters must be given to the children’s mothers the minute they got home, so he fished it out of his pocket and handed it over, grubby, crumpled and sticky from a half-sucked bull’s-eye Tim Budd had given him in class. He pulled the sweet off the letter and started to pick off the fluff.

At first Nora had stared at the envelope, her heart sinking. Letters from school usually meant trouble – she’d had plenty of that sort from the school while Gordon was there. Or, more often, not there. Playing truant – being cheeky – tormenting little girls by sticking their pigtails into inkwells – and, worse, pinching things from the cloakroom. Gordon was always in trouble of some sort. Sammy hadn’t ever got into that sort of trouble before, but then he was only seven – there was plenty of time for him to follow in his brother’s footsteps.

Sammy had picked off most of the fluff and popped the bull’s-eye into his mouth. He sat down on the floor andbegan to stroke the tabby cat curled up on the mat. ‘I haven’t done nothing. It’s about the war. We all got one. We’re being sent away.’

Dan Hodges is devastated when his wife Nora dies during the early days of the war.

Working long hours in a Portsmouth shipyard, how is he to look after his two sons, Gordon and Sammy? Gordon is sent to an approved school, which leaves young Sammy alone in the house, until neighbours in April Grove intervene and Sammy is evacuated to a village near Southampton.

Ruth Purslow, a young childless widow, takes him in, her compassion aroused by his plight. Slowly, as they grow closer, Ruth begins to dread the time when Sammy must return to Portsmouth.

But Dan, enduring the struggle of a man living alone in a blitzed city, begins to realize that Sammy means far more to him than he ever thought. He’s determined to bring Sammy home.