This is for all you ‘First Page Browsers‘ out there 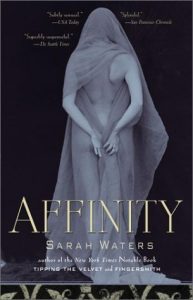 “I was never so frightened as I am now. They have left me sitting in the dark, with only the light from the window to write by. They have put me in my own room, they have locked the door on me. They wanted Ruth to do it, but she would not. She said ‘What, do you want me to lock up my own mistress, who has done nothing?’ In the end the doctor took the key from her and locked the door himself, then made her leave me. Now the house is full of voices, all saying my name. If I close my eyes and listen it might be any ordinary night. I might be waiting for Mrs Brink to come and take me down to a dark circle, and Madeleine or any girl might be there, blushing, thinking of Peter, of Peter’s great dark whiskers and shining hands”

Just to give you an extra helping hand, here is the book’s premise

An upper-class woman recovering from a suicide attempt, Margaret Prior has begun visiting the women’s ward of Millbank prison, Victorian London’s grimmest jail, as part of her rehabilitative charity work.

Selina was imprisoned after a séance she was conducting went horribly awry, leaving an elderly matron dead and a young woman deeply disturbed.

Although initially skeptical of Selina’s gifts, Margaret is soon drawn into a twilight world of ghosts and shadows, unruly spirits and unseemly passions, until she is at last driven to concoct a desperate plot to secure Selina’s freedom, and her own.