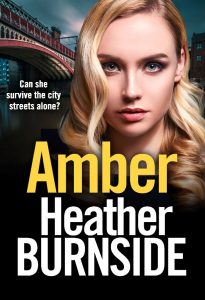 “Amber stared at the grossly obese man in front of her called Bill as he held out the garments for her to wear. She shuddered when she realised what they were. This had been bound to happen sooner or later but the fact that Amber had been expecting it didn’t less its dire impact.

‘Well, aren’t you gonna take them then?’ he asked.

She stepped forward, cautiously, noticing the whiff of BO that emanated from him. Then she held out her hand while he passed her the clothing.

‘I guessed your size from when we met last time,’ he said, leering at her.

Amber knew that the client had probably chosen her because of her petite frame as she was only five foot two and a size eight.

They were in a hotel room, but it wasn’t a plush hotel like the ones in Manchester city centre that a lot of her punters used. It was a bit neglected and situated in the inner-city suburbs; probably a three star, if that, she guessed.

During the time she’d been on the game, she had learnt that the choice of hotel said a lot about the punter. This particular hotel suggested that Bill either didn’t have money to splash around, he was stingy, or he just wanted a quickie with a street girl who he thought didn’t deserve any better.

Punters who opted for swanky city centre hotels generally had money to spare and they enjoyed the luxury and privacy that the more upmarket hotels afforded them. But when a punter chose this type of hotel it always made her more wary than usual. Why opt for a cheap hotel rather than visiting a whorehouse? Was it because there would be no one there to offer protection if things turned nasty?

If it hadn’t been for the fact that she’d done business with Bill previously she would have declined but he’d treated her OK last time even though he was repulsive to look at. And, if she’d have known beforehand what type of job it was, she would also have turned him down, aware of the implications. But it was too late now. She was here and she had the outfit in her hand ready to put on”