Save Her Child
by C.J. Lyons
First Lines 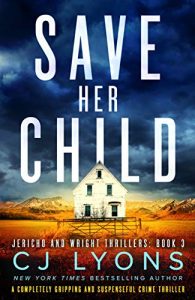 She woke before dawn, screaming in pain. No, no, no. It was too soon. The pain stole her breath until she was gasping, swallowing any air she could get, doubled over, her hands cradling her swollen belly. Not now, not here, not now; the words became a bizarre mantra. Then the pain released its grip.

She was all alone, stranded in a wilderness – a log cabin, of all things. He’d thought it was so cute, romantic, even. Most of all, safe. Their enemies would never find her here. And he had a plan. All they needed to do was follow the plan and everything would be fine: the baby would be safe, they would be rich and, best of all, they wouldn’t need to spend the rest of their lives looking over their shoulders.

Despite the August heat stifling the night, the corpse didn’t smell too bad. Not yet, anyway. Detective Naomi Harper knew that wouldn’t last long. Avoiding broken glass and puddles of undetermined origins, Harper crouched on the pavement of a narrow alley on the east side of Cambria City’s Kingston Towers. Around her came camera flashes and the chatter of the crime scene techs as they worked the perimeter of the scene, leaving the body to the coroner’s investigator and Harper. She settled her weight on her heels as she hovered over the young woman’s body.

She held her baby in her arms and she knew in that moment that he’d be coming for her. She couldn’t tell anyone her name, she couldn’t let him find her. She had to keep her child safe.

In the summer heat at the Craven County Fair in rural Pennsylvania, Dr Leah Wright is shocked to find a pregnant woman hiding from view and in labor. Leah manages to deliver the baby safely, but the woman won’t reveal her name. She’s terrified, running from someone, and days later both she and her newborn son go missing…

Desperate to save them, Leah turns to Detective Luka Jericho for help. Eager for Leah’s help with a complex case of his own, Luka asks Leah to interview the widow of a man who has just been murdered. Soon they uncover a shocking connection between the two cases: the widow’s lawyer, a local minister, Reverend Harper, was spotted driving the missing mother away from hospital. Is this the man she was so afraid of?

When Reverend Harper refuses to talk, Luka and Leah turn to the only person who he might speak to: his daughter and Luka’s newest detective, Naomi Harper. But Naomi’s childhood in her father’s stark white house up in the mountains was more painful than Luka and Leah could ever have imagined.

Is it already too late to save the woman and her baby?