‘Sidney Chambers And The Shadow Of Death’
by James Runcie

‘SIDNEY CHAMBERS AND THE SHADOW OF DEATH’ by JAMES RUNCIE

“Canon Sidney Chambers had never intended to become a detective. Indeed, it came about quite by chance, after a funeral, when a handsome woman of indeterminate age voiced her suspicion that the recent death of a Cambridge solicitor was not suicide, as had been widely reported, but murder.

It was a weekday morning in October 1953 and the pale rays of a low autumn sun were falling over the village of Grantchester. The mourners, who had attended the funeral of Stephen Staunton, shielded their eyes against the light as they made their way to the wake in The Red Lion. They were friends, colleagues and relatives from his childhood home in Northern Ireland, walking in silence. The first autumn leaves flickered as they fell from the Elms. The day was too beautiful for a funeral.

Sidney had changed into his suit and dog collar and was about to join his congregation when he noticed and elegant lady waiting in the shadows of the church porch. Her high heels made her unusually tall and she wore a calf-length black dress, a fox fur stole and a toque with a spotted veil. Sidney had noticed her during the service for the simple reason that she had been the most stylish person present….” 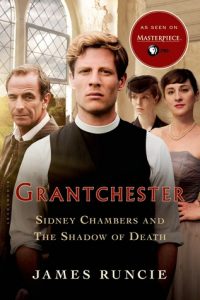 It is 1953, the coronation year of Queen Elizabeth II. Sidney Chambers, vicar of Grantchester and honorary canon of Ely Cathedral, is a thirty-two-year-old bachelor. Tall, with dark brown hair, eyes the color of hazelnuts, and a reassuringly gentle manner, Sidney is an unconventional clerical detective. He can go where the police cannot.

Together with his roguish friend, inspector Geordie Keating, Sidney inquires into the suspect suicide of a Cambridge solicitor, a scandalous jewelry theft at a New Year’s Eve dinner party, the unexplained death of a jazz promoter’s daughter, and a shocking art forgery that puts a close friend in danger. Sidney discovers that being a detective, like being a clergyman, means that you are never off duty, but he nonetheless manages to find time for a keen interest in cricket, warm beer, and hot jazz – as well as a curious fondness for a German widow three years his junior.

A shocking, masterfully plotted novel that will leave readers breathless, How The Dead Speak is McDermid at her be...

"My precious daughter. You can never discover what I’ve done . . . or what I’m willing to do to keep you safe."