‘The Diabolist’ by Layton Green

They called themselves the House of Lucifer. Thirty minutes before midnight High Priest Matthias Gregory swung wide the doors to Red Abbey, and one by one the members filed inside.

The interior was a Gothic-inspired mockery of its Catholic counterpart: the crimson walls and vaulted ceiling hovered over the aisles with garish menace, pentagrams served as stained glass windows, an inverted crucifix hung on the wall behind the pulpit. Guttered candles lit the interior with a red glow, and Matthias had to admit the architects had achieved the desired effect: He felt as if he were walking straight into the mouth of Hell.

I can’t believe that it was way back in 2010, when author Layton Green first contacted me with regard to Fiction Books reviewing his debut novel, ‘The Summoner’. This was actually to become the second in a series of thrillers featuring the new character of Dominic Grey, although it was written before the first book ‘The Egyptian’, which was released the following year.

From Africa, to The Middle East and Eastern Europe, Dominic Grey and Viktor Radek, private investigators of cults and the occult, must sift through science and myth to uncover the truth – before that truth kills them.

Now, after a short break, Dominic and Viktor are back and poised for their latest adventure, which is even more deadly and dangerous than before, taking the pair from the streets of San Francisco to Europe, as part of their quest to travel the world, investigating the bizarre…one cult at a time.

Don’t forget that Gilion and all the other contributors to this meme love to hear from you, so why not leave a comment or two at the same time.

As this was an author invitation to read and review, a complimentary Kindle download of ‘The Diabolist’, was gifted to me, by its author, Layton Green.

Enjoying the quiet tranquility of a bank holiday in the Lake District - garden full of bottles. 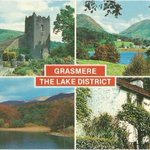 #MailboxMonday #NewOnMyShelf #Bookouture #NetGalley
Check out this new trio of goodies!
All great new mystery / thrillers!
https://www.fiction-books.biz/weekly-memes/mailbox-monday/mailbox-mondaynew-on-my-shelfa-trio-of-goodies/
Thanks Bookouture & NetGalley
I look forward to my first set of 'Books On Tour' with you guys! 👍☺️
@NetGalley @bookouture