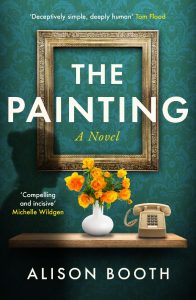 THE PAINTING by ALISON BOOTH

“Aunt Tabilla was banging about downstairs, rattling crockery and crashing saucepan lids like cymbals, an early morning concerto that only Anika could hear. Reluctantly she threw off the bedcovers, stumbled to the bathroom and confronted her green-tinged reflection in the pitiless mirror. After splashing her freckled face with water and finger-combing her sleep-mussed hair, she was ready to greet the day.

Aunt Tabilla was banging about downstairs, rattling crockery and crashing saucepan lids like cymbals, an early morning concerto that only Anika could hear. Reluctantly she threw off the bedcovers, stumbled to the bathroom and confronted her green-tinged reflection in the pitiless mirror. After splashing her freckled face with water and finger-combing her sleep-mussed hair, she was ready to greet the day.

‘Good morning, Aunt Tabilla.’ In the kitchen Anika had to shout over the rat-a-tat-tat of cutlery landing in the drawer. The open back door framed the view of a narrow brick path leading to the disused outhouse. Beyond the paling fence at the end of the yard, terraced houses stepped down the hill like rows of dominoes waiting to be knocked down. In the distance were the curves of the Glebe Island wheat silos and, above it all, the already-brilliant cobalt sky of another hot March day.

‘I can hear you,’ Tabilla said. ‘No need to bellow.’ Her face might have been ordinary if it wasn’t for her smile that made dimples appear by her mouth and crows’ feet radiate out from the corner of each eye. This gave her the lively look of someone who laughed a lot, although she didn’t. Yet somehow the rarity of her smiles and the asymmetry of the dimples made her expression irresistible and Anika found herself smiling whenever she did.

And Tabilla was smiling now as she jabbed with her forefinger at the Sydney Morning Herald that was spread across the kitchen table. It was open at the arts pages and an advertisement ringed with a black felt-tip pen. Before giving Anika a chance to read it, she explained that on the first Wednesday of every month the Art Gallery of New South Wales invited people to bring in their artworks to learn if they were genuine or forgeries.

‘That’s next week,’ Tabilla said. The date – Wednesday 7 March 1989 – had been twice underlined. ‘Now you can find out if the picture you have is something worth taking care of.’

‘Of course it’s worth taking care of. But it’s really your painting.’

‘It’s yours, Anika,’ Tabilla said. ‘I gave it to you, remember?’ When Anika’s father had said she was to take the portrait with her the day she left Hungary, he’d explained that it belonged to Tabilla, or more precisely, to Tabilla’s husband, who’d died years before. After Anika arrived in Sydney, Tabilla had refused to accept it; she said it brought back too many sad memories. Besides – Anika had quickly learned that Tabilla was fond of her ‘besides’ – she’d been without it since 1956 so she could manage without it now, and anyway, she’d never liked it much. Mawkish pictures of women with badly fitting dresses falling off their shoulders weren’t her thing, she was a dressmaker after all. But she was happy that Anika loved it.

Her aunt was ever magnanimous, Anika knew, but if the portrait of the auburn-haired woman turned out to be worth something, maybe she would talk to Tabilla about selling it. Even with Anika’s study-allowance and cheap board at Tabilla’s house, she found it a struggle to make ends meet. It had been a struggle ever since she’d given up hairdressing and became a part-time university student with a part-time draughting job that could go belly-up at any time, interest rates were that high.

Yet there was so much emotional baggage attached, limpet-like, to that portrait of the auburn-haired woman. Anika loved having her on the wall at the foot of her bed; she loved waking up to see her reflecting the morning light and her own radiance – that glow that the artist had captured with so many small brushstrokes laden with colour. The woman in the portrait reminded Anika of home; that particular afternoon when she’d left Budapest. That afternoon when her father, watched closely by her grandmother Nyenye, had thrust the painting into her hands, and later into the bottom of her suitcase where it had fitted perfectly. Now it was her legacy from Tabilla, and she couldn’t ever think of getting rid of it, could she? Still, she would love to learn who the artist was; the signature at the bottom of the picture was nothing more than an illegible scribble.

Tabilla ripped out the advertisement from the paper and handed it to Anika. ‘I’d love to know more about it too,’ she said.

‘I’m happy to go,’ Anika said. And she was, although she knew from Tabilla’s expression that she had no choice in the matter”

THE PAINTING by ALISON BOOTH

Sydney in early 1989, not long before the breakup of the Soviet Union. Anika, a traumatised young immigrant from Hungary, inherits a portrait of an auburn-haired woman.

Could it be of value, and if so, how did something so precious end up in her family’s possession? Anika takes it to a leading gallery where the curators identify it as being the work of the renowned French Impressionist artist Rocheteau.

Shortly afterwards, however, the painting is stolen.

Soon Anika receives a shock about its origin that links her ever closer to the two men she met the day she had the painting assessed, the curator Daniel and the enigmatic Jonno.

As these men insinuate their way into her life, her suspicions about their motives – grow ever more pressing.

Only by returning to Budapest can Anika finally track down the truth and confront the ghosts of her grandmother’s past.