Today is the official publication day of ‘Keep You Close’, the new psychological thriller by author Lucie Whitehouse. I would like to thank not only Lucie, but also Ellen Williams, Senior Publicity Manager, Bloomsbury Publishing Plc. for making my complimentary copy available and as usual, thanks also to the folks at NetGalley for facilitating the download.

First of all … the book

When the artist Marianne Glass falls to her death, everyone insists it was a tragic accident. Yet Rowan Winter, once her closest friend, suspects there is more to the story. Ever since she was young, Marianne had paralyzing vertigo. She would never have gone so close to the roof’s edge.

Marianne — and the whole Glass family — once meant everything to Rowan. For a teenage girl, motherless with a much-absent father, this lively, intellectual household represented a world of glamour and opportunity.

But since their estrangement, Rowan knows only what the papers reported about Marianne’s life: her swift ascent in the London art world, her much-scrutinized romance with her gallerist. If she wants to discover the truth about her death, Rowan needs to know more. Was Marianne in distress? In danger? And so she begins to seek clues — in Marianne’s latest work, her closest relationships, and her new friendship with an iconoclastic fellow artist.

But the deeper Rowan goes, the more sinister everything seems. And a secret in the past only she knows makes her worry about her own fate . .

You can check out those all important ‘first lines’, here ..

Hi! my name is LUCIE WHITEHOUSE… 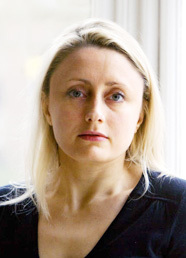 I was born in the Cotswolds in 1975 and grew up in Warwickshire, UK.

I studied Classics at Oxford University and then began a career in publishing while spending evenings, weekends and holidays working on the book that would eventually become ‘The House At Midnight’

Having married in 2011, I now divide my time between the UK and Brooklyn, where I live with my husband. I write full time and have contributed features to several UK national newspapers, magazines and journals.

Train yourself really to see things. A good way to do this is to pick an object at random once or twice a day and describe it to yourself in a way that feels fresh. Watch people carefully: the smallest actions (the apparently confident man who tugs constantly at a T-shirt that rides up over his stomach) can reveal a huge amount about a person’s dreams and fears, his vanities and insecurities, and often contradict what he or she is saying. Actions do speak louder than words. That said, listen too. When something strikes you as interesting, write it down. Even if you don’t know why it interests you now, there’ll be a reason.

“FROM PANTSER TO PLOTTER”

Some years ago, before we were married, my husband took me to a party thrown by one of his oldest friends, Sam, and his wife, Jackie. The party celebrated the Oscar that the short film they’d produced, ‘The New Tenants’, had just won.

.
From the moment it arrived – brandished by the film’s director, Joachim Back – that golden statuette, just over a foot tall, exerted a force field within the room. It had Hollywood star power – even those of us who thought we weren’t affected by it discovered that our eyes had other ideas. And if you couldn’t actually see it, you could always tell where it was by the tight knot of people that gathered round. Most wanted to hold and be photographed with it; a handful of others backed away as if it were cursed, among them my husband, Joe. Apparently, there’s an old superstition among screenwriters: if you hold someone else’s Oscar, you’ll never win one of your own.

.
The more I’ve learned about screenwriting, the more I’m certain I didn’t jinx any infinitesimal future chance of my own that day. People often ask Joe and me what it’s like to be married to another writer – Do we talk about ideas? Do we read each other’s work? (Yes) – but the truth is, screenwriting and novel-writing are so different that really, I don’t think we do the same thing at all.

.
Joe is a talented carpenter and, knowing what I do now about screenwriting, this strikes me as significant. When he is starting a new project, his first focus is structure. He pays careful attention to the ‘beats’ of a story, the individual units of plot – events, decisions and discoveries – that ensure it moves forward in a dynamic and satisfying way.

.
Since Aristotle’s Poetics, there have been countless books and guides, classes and workshops on story structure – Google ‘three-act structure’ and you’ll get 42 million hits explaining the details of set-up, confrontation and resolution, ‘inciting incidents’, mid-points, tent-poles. Some people rebel against the idea that stories can be reduced to what looks like a formula but the truth is, three-act structure simply describes the shape of what most humans innately feel is a satisfying story: a problem or situation is presented, the hero struggles against it and eventually, after a climactic confrontation, one way or another, the problem is resolved.

When Lucas inherits Stoneborough Manor after his uncle’s unexpected death, he imagines it as a place where he and his close circle of friends can spend time away from London. But from the beginning, the house changes everything. Lucas becomes haunted by the death of his uncle and obsessed by cine films of him and his friends at Stoneborough thirty years earlier. The group is disturbingly similar to their own, and within the claustrophobic confines of the house over a hot, decadent summer, secrets escape from the past and sexual tensions escalate, shattering friendships and changing lives irrevocably.

I haven’t given up on you and I’m not going to. It’s time to stop playing hard to get now. When Kate meets a dark, enigmatic man in a Soho bar, she doesn’t hesitate long before going home with him. There is something undeniably attractive about Richard – and irresistibly dangerous, too. Now, after eighteen exhilarating but fraught months, Kate knows she has to finish their relationship and hopes that will be the end of it. But it is only just the beginning. Fleeing London for the wintry Isle of Wight, she is determined to ignore the flood of calls and emails from an increasingly insistent Richard. But what began as a nuisance becomes an ever more threatening game of cat and mouse.

When I wrote my first two novels, ‘The House at Midnight’ and ‘The Bed I Made’, I was a ‘pantser’ – I wrote by the seat of my pants, setting off with a location, a handful of characters and a central problem. I uncovered the story as I went along, shaping it later by drafting and redrafting over and again. When it came to ‘Before We Met’ and ‘Keep You Close’, just published, I tried a different approach – a screenwriter’s.

Hannah, independent, headstrong, and determined not to follow in the footsteps of her bitterly divorced mother, has always avoided commitment. But one hot New York summer she meets Mark Reilly, a fellow Brit, and is swept up in a love affair that changes all her ideas about what marriage might mean.

Now, living in their elegant, expensive London townhouse and adored by her fantastically successful husband, she knows she was right to let down her guard.

But when Mark does not return from a business trip to the U.S. and when the hours of waiting for him stretch into days, the foundations of Hannah’s certainty begin to crack. Why do Mark’s colleagues believe he has gone to Paris not America? Why is there no record of him at his hotel? And who is the mysterious woman who has been telephoning him over the last few weeks?

Hannah begins to dig into her husband’s life, uncovering revelations that throw into doubt everything she has ever believed about him. As her investigation leads her away from their fairytale romance into a place of violence and fear she must decide whether the secrets Mark has been keeping are designed to protect him or protect her…

.
Among novelists, the lines are drawn between plotters and pantsers, and as an inveterate pantser, I was sceptical about plotting in advance. It seemed calculated, cold-blooded: working out the story as I went felt organic, more honest.
Crossing the line wasn’t easy – it takes time to change and though it might sound ridiculous, I felt guilty about the hours I spent staring into middle distance, returning home from afternoon work sessions with a single new idea – two on a good day – and no words written at all. I was used to measuring productivity in the daily growth of a Word file; it was a job to convince myself that this thinking was work, too.

.
In the end, though, the results were conclusive. Approaching the structure of my novels with a screenwriter’s rigor didn’t constrain me as I feared. Instead, having a firm framework in place when I set out gave me mental freedom: I no longer hesitated to follow the energy in a scene lest I wrote myself into a corner because I knew I wouldn’t. As a wise playwright friend of mine once advised: structure sets you free.
I also now know that there is nothing inorganic or cold-blooded about planning a story in advance. Any satisfying story has been well plotted, whether that happened before or during the slow accumulation of words in the file…