Guest Post By M. G. Scarsbrook, Author Of ‘Dream Of The Dead’

Today it is the turn of British born author, M. G. (Matthew) Scarsbrook to post a guest blog in the  ‘Meet The Authors’ pages and he has chosen to chat about the venue for his latest book, ‘Dream Of The Dead’. The book introduces an intriguing new detective with an interesting past, as well as having a rather unique storyline, with a real sting in the tail!

Without further ado, it’s over to you Matthew: 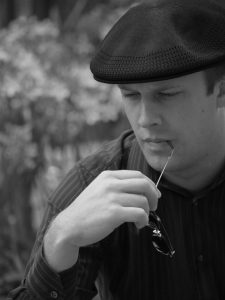 Hi! I’m M. G. (Matthew Graham) Scarsbrook. I grew up in England and was educated in Canada and the United States, although I am currently living back in the UK.

I have an MA in Screenwriting and after adapating one of my earlier historical novels, ‘The Marlowe Conspiracy’, into script, found myself ranked within the top 30 at the Nicholl Fellowships, one of the most prestigious screenwriting contests in the World.

I am the author of two historical novels and the editor of four literary collections, with ‘Dream Of the Dead’ now taking my writing career into a whole new and more contemporary direction.

Since 2011 my books have sold more than 20,000 copies worldwide and have been translated into five languages.

A member of the prestigious Crime Writers’ Association and the Society of Authors, I am now working on the next book in the ‘West End Murders’ series.

Unlike my previous work, this novel will have a contemporary setting and will be very modern in style. However, it still has an historical angle too: the story is inspired by one of the most notorious and perplexing unsolved murders in English legal history. The detective character is himself also based on a very famous literary hero, but for now I can’t tell you who – it’s a mystery, after all! What I can say is that the detective will have a personal unsolved crime of his own to investigate in the novel, aside from the main murder plot, and I plan for him to gradually solve this mystery in each book in the series.

You can catch up with me at my website … www.mgscarsbrook.com

My debut mystery novel Dream of the Dead is the start of a new detective series based in the West End, London’s world-famous entertainment district. Like the Oxford colleges of Colin Dexter, or the racecourses of Dick Francis, the charming theatres of the West End might initially seem an unusual environment for a crime novel. It’s certainly an exuberant, expensive, exhilarating area. But is it dangerous? After all, anyone who knows London tends to think of the West End as a pleasure ground for the masses. The colossal shops of Oxford Street and Regent Street. The glitzy restaurants of Soho and Covent Garden. The tourist magnet of Leicester Square. And, of course, the gorgeous theatres of St Martin’s Lane and Shaftesbury Avenue. Hardly a place teeming with criminals.

Or so it would seem…

Yet take a guess at which area of London also has the highest crime rate? Guess which part of the capital you are most likely to become a victim of violence?

Many famous places typically thought of as being in ‘London’, from touristy sights like Big Ben, Trafalgar Square, or 10 Downing street, to prestigious universities, billion-pound corporate headquarters, and five star hotels, are actually located in the borough of Westminster. This borough also contains the priciest office space in the world to rent (£100 per square foot). And a Grade 1 listed home recently went on sale here for £250 million. By any standards, Westminster is a desirable, world-class location.

It’s also a bit dodgy. According to an official report, it also has more violent crime than England’s second largest city of Birmingham.

Wait a minute. Are you sure?

Yes, it’s true. The UK Peace Index, a report from the Institute for Economics and Peace, puts Westminster 12th in the UK for most violent places to live (Birmingham is 19th on the list). Crime figures from the Metropolitan Police also show that 8,288 violent acts against the person occurred in 2012, including more than 2,000 robberies. For 2013, on a monthly basis, Westminster has by far the highest crime levels in London, with a crime rate of 20.46, more than double the second most crime-ridden borough (Islington at 9.97), and far more than notorious areas like Tower Hamlets, Newham, and Lewisham. Furthermore, within Westminster itself, the most dangerous ward is the West End – and by a vast margin. Its monthly crime rate of 127.28 puts the West End almost ten times higher than many other places, such as Knightsbridge at 14.13, or Abbey Road at just 4.62. The West End, almost by itself, is largely responsible for the inflated levels of crime in Westminster.

Now hold on. Before you think twice about those theatre tickets you’ve just booked, we do need to put this in context. Although street gangs are sometimes known to commute to the West End to deal drugs, rob, and mug people, most of the offences there derive from another source.

Drinking. Lots and lots of drinking.

The West End has a massive concentration of bars and nightclubs, and most of the offences committed in the area relate to the alcohol-fuelled, midnight antics of drunkards, such as anti-social behaviour and violence against the person. We also need to remember that this is a busy area, too, with a high footfall. Extremely high. London is the most visited city in the world, and many people are attracted to the West End during their trip to the capital. More than 200 million people visit the area every year. No other borough can boast such popularity. Also, despite the high levels of violence, Westminster saw only one murder in 2012 – that’s right, just one – and homicide rates have fallen dramatically and consistently across the whole city every year since 2003.

So, while the West End isn’t exactly a den of thieves and cut-throats, there is certainly a trace of blood amongst all the glitter, too. Indeed, since its inception, the West End has always been a ‘colourful’ part of London.

During the 1600s, the streets and squares of the West End were built to hold the palaces of aristocracy and gentry. Opulent theatres, exotic shops, and refined gambling houses all sprung up to service the bored ladies and gentlemen. Eventually, as playwrights, prostitutes, and swindlers also plied their business in the area, the reputation of the West End declined, and aristocrats scurried away to calmer and more prestigious parts of the city. Nevertheless, their venues of entertainment remained, and the district soon embraced even bawdier forms of amusement, too, which held greater mass appeal. More theatres, more taverns, more brothels, and more coffee-houses arrived. An entire district, devoted to pleasure in all its myriad forms, was now open to all.

The West End was born.

Indeed, the streets soon became jubilant to the point of lawlessness, increasingly known as much for the spectacle of their playhouses, as for their duels (Sheridan fought one on Henrietta Street), and their bare-knuckle boxing matches (the oldest pub in the area, The Lamb and Flag on Rose Street, was originally called the ‘Bucket of Blood’). At the top of St Martin’s Lane, the Seven Dials district also became a notorious slum, even providing the inspiration for Hogarth’s famous painting ‘Gin Lane’.

Given this wild history, perhaps it’s no surprise the West End attracted the stern attention of the authorities.

In 1749 the West End produced England’s first professional police force. Operating out of the magistrates court on Bow Street, just a short walk from Drury Lane and the Royal Opera House, the ‘Bow Street Runners’ were the first organisation of men formally employed by the central government to fight crime. Henry Fielding, author of Tom Jones, is credited with creating the revolutionary organisation, although it was under his brother John Fielding that it grew into an effective force to patrol the whole capital. The ‘Bow Street Runners’ are widely considered to be the forerunners of the modern police force in Britain. Indeed, the copper buttons on their uniforms gave rise to the colloquialism of ‘coppers’, a nickname still used for the police today!
While the manic excitement of the West End has always needed the law to prevent it tearing a hole through civilised London, perhaps the biggest challenge for the area came in more recent times. In 1974 the market in Covent Garden, arguably the heart of the West End, was closed due to congestion and moved to Nine Elms. The old and vacant buildings left in its stead were gradually redeveloped into shops and entertainment venues. But without the same levels of people passing through the area, the following decade lurched into a post-market wasteland. The tube station was even shut on Sundays because no one wanted to go there. Likewise, Leicester Square spent most of the 1980s mired in the squalor of tramps, hustlers, and drug dealers. Thankfully, not much of this slump is visible anymore, yet only in the last two decades has the area really cleaned itself up…

DARKNESS BEHIND THE LIGHTS …

Nowadays the resurgence of the West End is staggering. The tube station in Covent Garden is only likely to be shut due to overcrowding. Gangs of crushing tourists are far more prevalent than thugs leering in the shadows. A brief stroll through the area reveals brightly lit signs, family-friendly squares, a plethora of shows, chain shops, designer boutiques, and trendy restaurants set within characterful lanes and cobbled alleys. Once again the West End is the centre of commerce, creativity, and adventure in London – the most lively area of the city, and perhaps the entire country. But a darker, lawless past and present is never too far beneath the surface shine, either. Such dynamic tension drives the action behind any narrative. Despite first appearances, then, the West End provides the natural environment for any fictional tale, and is the perfect setting for a crime story, especially a detective novel like Dream of the Dead.

‘DREAM OF THE DEAD’ – WEST END MURDERS BOOK ONE

A RARE, CORROSIVE POISON HAS BURNED THROUGH HIS STOMACH.

NO ONE KNOWS WHY.

Enter DI Jack Ravenshaw. A young, talented officer with a secret: he belongs to England’s most famous dynasty of actors. When Scotland Yard uncovers his hidden past, his acting experience, and his formidable connections, he becomes the perfect choice to investigate the producer’s killing. Against his wishes, he must return to London’s West End.

Cast back into one of the most vibrant – and violent – areas of the country, Ravenshaw is quickly surrounded by sexy performers, shadowy assistants, and powerful investors. Finding the truth seems almost impossible. Devious suspects lie at every turn. Corrupt officers sabotage his inquiry. Even his mind tricks him with dreams and hallucinations about his past. Yet with the help of his mysterious partner, DS Emily Hart, Ravenshaw must put all his skills into action against an ingenious, twisted, and ruthless killer…

But can he solve the case before another person is murdered?

Where to Buy The Book:

Amazon US … Dream of the Dead (West End Murders)

Written by Yvonne
6 comments
New On The Shelf At Fiction Books This Week
FacebookTwitter
Guest Post By Nichola Hunter, Author Of ….. ‘Ramadan Sky’