Guest Post By Nancy Klann-Moren, Author Of ‘The Clock Of Life’

Yvonne7 min readMay 18, 20134 comments
Share
FacebookTwitter
Today, I am handing the ‘Meet The Authors’ page, here at Fiction Books, to author Nancy Klann-Moren.
I have Nancy’s latest book ‘The Clock Of Life’ on my review shelf and today Nancy herself, would like to share the journey which she undertook, to gather material ideas, characterisations and storyline inspiration, towards writing the final draft of the book.
Since I first began talking with Nancy, she has received the great news that ‘The Clock Of Life’ has been chosen as a Finalist in the 2013 Next Generation Indie Book Awards.
Over to you Nancy ….
…

I tried my hand at writing short fiction while traveling for work in advertising and marketing, as a creative outlet on long plane rides. That led to me signing up for writing classes, writer’s conferences and local workshops.  My goal―to create unique stories told in a distinctive voice.  My short stories are eclectic and poignant, and have garnered awards and publication in anthologies.

Short stories were my primary genre until one morning while in a workshop at The Santa Barbara Writers Conference, I read an excerpt.  When I finished, the instructor, Sid Stebel, asked what I was doing for the next couple years, because, “What you have written isn’t a short story, it’s a novel.”  After a good deal of foot dragging I realized the subject matter was so important I took up the challenge and penned the novel, “The Clock of Life.”

My collection of short stories is titled “Like The Flies On The Patio.”

I am now working on a new novel loosely based on the time my friend and I found an old diary in an antique shop and took a road trip to find the lady who wrote in the book.  The novel will take the girls cross country and into all sorts of trouble.

“Several years ago I wrote a short story of about 4,000 words, called ‘Fate Carries Its Own Clock’, which deals with friendship and bigotry, and focuses on an incident that challenged a young boy to dig deep into himself and “do the right thing.”  Due partially to the subject matter, and partially because I love southern literature, I set it in a small Mississippi town.
One morning while in a workshop at The Santa Barbara Writers Conference, I read an excerpt. When I finished, the instructor, Sid Stebel, asked what I was doing for the next couple years, because, “What you have written isn’t a short story, it’s a novel.”  Stunned, I thanked him for his opinion and immediately dismissed it.  But when a seed is planted, it simply must sprout.
For close to a year I stewed over his suggestion, and imagined scenes―without writing a word. Sometimes procrastination is a beautiful thing, because when I finally took up the challenge I was already comfortable with the characters and the setting I had worked out in my head.  But, I felt unsure about the actual town itself.  So unsure I took a road trip through the back roads of Georgia, Alabama, and Mississippi, to take in the spirit of the many small towns that eventually became Hadlee.
A couple of the favorite things I encountered along the way I gave a nod to in the book”: 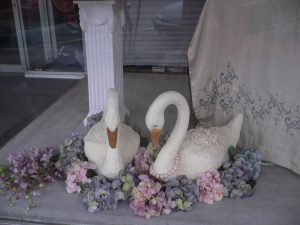 “We parked nose to the curb in front of Koman’s bakery. Gracing the front window were Styrofoam reproductions of Mrs. Koman’s white frosted cakes in the shape of trumpet swans. Six years worth of Dunlap County Fair blue ribbons for the specialty cake category hung from their necks.” Pg. 42
“Somewhere in the middle of Mississippi I came across this store that ran on the honor system.” 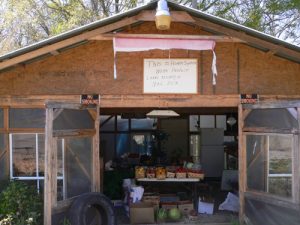 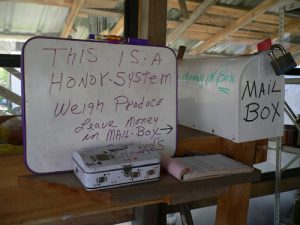 “The light bulbs were stocked along the back wall, past the bins of nails and bolts and nuts and washers. An old grocery scale with a bent needle pointed to half-a-pound, and a stack of small paper bags were next to the bins. A sign above the scale read, “Honor system. Weigh and leave money in the box. The metal box stayed unlocked.” Pg. 51 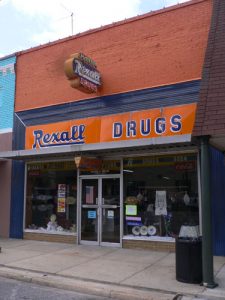 “In chapter twelve, Jason Lee is feeling like nothing’s going right.”
“What’s goin on, son?” “Nothin, I guess.” I looked across the street at the blue and orange Rexall sign and thought they should change it to Wrecks all.”
“A little later in the chapter:”
“While he was gone I noticed the sweet smell of cinnamon buns drifted down from Koman’s ovens, and the Rexall sign looked right again.” Pg 112

“Because so many of the towns I visited had a business establishment of one sort or another called Busy Bee I had to include it in my story.”
“What kind of hogwash are you feeding the boy?” Birdett Foster’s voice startled me. I hadn’t heard the little bell ring over the front door. I looked up beyond his six-foot-plus, extra long body to the John Deer cap on top of his head. “Just chewin on Jason Lee’s ear about J.L.,” Wally said. “Pull up a chair.” “Don’t mind if I do. Waitin on the wife. She’s at the Busy Bee under one of those dryin helmets. Looks like torture to me.” Pg 59

“I had already imagined the Rainey house, and the dynamics of the porch, but after passing this place, I gave mine a corrugated roof:”
“The corrugated tin roof crackled and groaned and popped each day when the heat from the sun rose and fell. During the rainy season, the same roof shot water down its furrows onto Mama’s Pride of Mobile azaleas bordering the front porch.” Pg 12
“If I were asked to describe this aspect of the writing journey in two words, I’d have to say…”

“Southern Comfort.”
…
In the small town of Hadlee, Mississippi, during the 1980s, Jason Lee Rainey struggles to find his way amongst the old, steadfast Southern attitudes about race, while his friendship with a black boy, Samson Johnson, deepens. By way of stories from others, Jason Lee learns about his larger-than-life father, who was killed in Vietnam.  He longs to become that sort of man, but doesn’t believe he has it in him.In The Clock Of Life he learns lessons from the past, and the realities of inequality. He flourishes with the bond of friendship; endures the pain of senseless death; finds the courage to stand up for what he believes is right; and comes to realize he is his father’s son.This story explores how two unsettling chapters in American history, the Civil Rights Movement and the Vietnam War, affect the fate of a family, a town, and two boyhood friends.

Thank you so much for stopping by today Nancy. It is always so interesting to have an insight into the background for a story and to discover just how an author sets about fact finding and idea gathering, to develop a storyline.

As this was an author invitation to read and review, a Kindle download and PDF of ‘The Clock Of Life’ was sent to me free of charge, by its author, Nancy Klann-Moren.