This week, I am opening up the ‘meet The Authors’ pages here at Fiction Books, to Australian writer Nichola Hunter, author of ‘Ramadan Sky’, a contemporary novella based on a classic story of forbidden love.

Some stories just have to be written – that’s how Nichola felt after the unforgettable experience of living in South East Asia. Travelling and working in countries such as Indonesia and Thailand, she became aware of a disturbing phenomenon – unconventional relationships, between rich westerners and the poor locals. In this, her stunning debut novella, published last month by authonomy, she explores the notion of cross-cultural relationships from different angles.

Here she tells us more about this subject and some others that she felt compelled to explore … So, it’s over to you Nichola …

Growing up in suburban Australia and educated by humourless catholic nuns will get you prematurely itching to go anyplace else. As a child, I remember dreaming of running away–packing my small suitcase and keeping it ever-ready under the bed, but with the sad knowledge that there was nowhere to go and no way to get there, at least until I was old enough to drive.

I did read a lot of books though, about times past and future and distant places, and imagined being a host of other people when I was growing up. No wonder that I eventually travelled a lot, albeit around in circles sometimes.

I spent my thirties and some of my forties living in Thailand, Vietnam, China and Indonesia, and will be permanently nostalgic for those places now that I am living back Western Australia, in a beautiful town surrounded by sapphire water and winds blowing in from all of the places as yet unseen. I love the richness and the surprises that living in another country can bring, and the love and beauty of expression that is at the heart of all cultures.

Over the years I have written short stories and poems and have done some freelance travel writing, but it always seems a requirement of editors that the western eye (and ‘I’) is essential to the story. When I decided to write my novella ‘Ramadan Sky’, set in Indonesia, therefore, I decided to write from three different perspectives as an experiment, so I used three narrators, only one of them a westerner. .

One thing that will always trouble me,—and is maybe a hangover lesson from those nuns of yore, is that the vast majority of the world’s population is unnecessarily poor. This informs my writing and my politics. I hope for a day when this beautiful planet’s ample resources are shared and that everyone has access to that wonderful thing we call opportunity.

Globalisation, like war, makes strange bedfellows. In South East Asia there are so many consular staff, engineers, teachers, retirees and business people, from the west who have SE Asian partners. There is a delicious aspect to being in love with a person from another culture, with a different native language. You can fall for the grace and beauty of the culture and the person at the same time, and you can watch each other navigate, like vulnerable children through the stumbling blocks of your own language and culture. 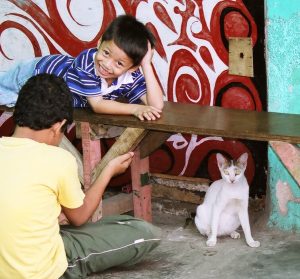 .
Some of the relationships I saw while working as an expat seemed very romantic, but others were a little disturbing, or even just plain wrong – mostly the affairs where the men were very much older (from thirty to forty years older) than the women, and held all the financial power. The girls behaved like pretty little playthings, and the men seemed controlling, boorish, and happy to father children who they would possibly not be alive to see past adolescence. The girls of course, held the sexual power and used it to their benefit.

.
Very old rich men with very young poor women didn’t seem right to me when I lived abroad, but I revelled in the countless stories of swindles and treachery. One that springs to mind is of a retired German (sixty-five years old) who married a nineteen-year-old and returned to Thailand from a trip back home  to find a stranger at his front door. His young bride had sold their house and run away with the profits. An old army man from the Sates told me this story, and didn’t seem to be able to understand my take on the whole thing – that it served the old bastard right and he should have seen it coming. There were many relationships where the money-age-power imbalance was there, but things did not seem so black and white. I really felt sorry for my neighbour, a young Norwegian man who was desperately in love with his Thai wife, and didn’t know the half of her goings on when he was away at work. He came back from a month away to find the house exactly as he had left it, but his wife had completely disappeared. I had seen her leave in a big black Mustang, which was close to impossible in that little Thai town, driven by the local gangster who was a kind of celebrity there.

.
In some of the cross-cultural relationships I encountered, it was very easy to see that one or both parties were there for convenience, but others were more ambiguous and had me asking: ‘Who, if anyone, is exploiting who?’ I wanted the relationship between Vic and Fajar in Ramadan Sky to reflect this kind of ambiguity. There is a big age difference between the two characters and there is also an understanding that the relationship will not last, that money will change hands – simply because one has money and the other doesn’t, but it’s a relationship where convenience is entwined with heady emotion, most particularly desire.

.
Of course, there were other things I wanted to get off my chest after several years of living in SE Asia. The widespread belief in animism and magic fascinated me. In Cambodia, I saw someone playing a harp to a spirit inside a tree and in Thailand my neighbour gave me some magic lipstick from a local witch to use to ward off a love rival. Throughout Indonesia, the practice of black (or at least grey) magic sits side by side with Islam and I wanted to show this in Ramadan Sky.

.
The least enchanting aspect of my travels, and the most ubiquitous, was the poverty. The grinding desperation of people trapped and destitute when they are young is a particularly terrible thing to witness. Youth is a time of limitless possibility, yet poverty takes possibility away, leaving courage and passion with nowhere to go. To see so many young men on the streets of Jakarta trying to eke out a living was to see so much frustration and so many dashed hopes. In Ramadan Sky, Fajar is the embodiment of these young people, and intentionally flawed. The way I see it, the poor are no more noble than you or I, still they are just as deserving.

A contemporary twist on a classic story of forbidden love, set in Jakarta, capital city of Indonesia.

When Vic accepts a teaching position in Jakarta, she has already been working and travelling in Asia for many years; she thinks she knows what to expect. However, before long she becomes troubled by the casual coexistence of vast wealth and woeful poverty, and by the stark differences in freedom and power between the men and the women. It also becomes apparent that there will be no support or companionship from her fellow Westerners and colleagues.

Fajar has lived in Jakarta all his life. He gets by, loaning money from friends and family, spending his nights racing, and his days working on the roads as an ojek driver. When he impresses a customer with his understanding of English, he sees an opportunity. He dedicates himself to being the woman’s driver – taking her to and from work, running her errands. He thinks he’s won big.

Neither Fajar nor Vic expect to find friendship and solace in their strange arrangement. But, before long, they will step outside the mores of their cultures together, crossing a boundary that will shake both of their lives.

Thanks for contributing such an excellent guest blog, Nichola. I am certain that there will be a few raised eyebrows from many who read it and plenty of throat clearing from others, however reality and truth are often bitter pills to swallow.

Please note that this post is similar in content to the original, first published by Nichola over at the athonomy site, however it has been submitted by Nichola for use by myself, here at Fiction Books, at her request and with her express permission