“My Inspiration”
The Liars
by Naomi Joy
Blog Tour

Aria Fiction are certainly attracting some of the best authors to their site, whether they are from amongst the already well-established writing community, or as in the case of today’s featured author, Naomi Joy, new to the scene and just beginning their journey.

Either way, these Blog Tours are an important tool in helping to spread the word about some of the great upcoming books which will be hitting the shelves.

I definitely don’t know where I would be if it were not for the folks at NetGalley – although it is probably fair to say that my TBR pile would be in a much more manageable condition! 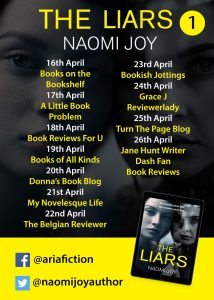 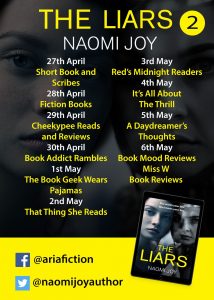 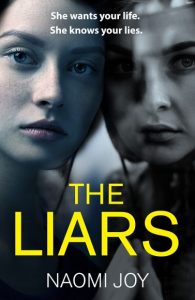 Two women. One deadly secret. A rivalry that could destroy them.

Ava Wells is perfect. She has the boyfriend, the career, the looks. One night changes everything and her life isn’t so seamless anymore.

Jade Fernleigh is ambitious. She’s worked hard to get where she is. And she’s not about to let Ava take the job she rightly deserves.

Both women share a secret that could destroy them, but who will crumble first?

The Liars is Naomi’s debut novel.

“Inspiration for The Liars”

I’m on the phone to a client one afternoon, hand to forehead.

I’m not sure why I’m being regaled with the details, but here we are…

“It’s weeping, regularly, in a very awkward location. I’ve had to wear a skirt to the office,” she crows.

I have my receiver on mute, just in case I can’t control my reactions.

“I’ve had to take in a hand-held fan to cool it down.”

I watch as a few colleagues, also on the call, poke their eyes above monitors like meerkats at the zoo.

Questions ping on my instant messenger:

Does she ever talk about work?

“And, the thing is, with hand-held fans, they move so quickly! I accidentally ripped off the edge of a nearby mole getting too close to the skin earlier.”

Hand to mouth, I imagine her, fan God-knows-where, making matters a hundred times worse. She rings off the call a few minutes later, leaving a few juniors confused as to exactly what kind of career they’ve let themselves in for.

This story is a paraphrased version of a real conversation I had with a client and, before I started writing The Liars, I’d scribbled a few notes describing instances similar to the above with the vague thought that I might like to turn them into a book one day. The idea took root and, when I started noticing nefarious inter-office politics and more-and-more instances of furious office rivalries around me, I became inspired to write a completely different kind of story.

My reading tastes have always veered towards crime and thrillers, so perhaps it was inevitable. The Liars, a psychological thriller, was inspired by the phenomenon known as the Sisterhood Ceiling: the idea that women in competitive environments hold one another back from progressing.

In PR, I believe it has to do with the following facts: the industry is dominated by women – 66% to 34% – but, at the top end, this figure flips. Of the women in PR, just 20% hold senior roles. Add to this a brutal gender pay-gap of 23.5% (the U.K. average is 18%) meaning that a woman in the industry earns, on average, £12,000+ a year less than her male counterpart, and you can start to see why a ruthless and competitive environment exists amongst the women in PR.

In the case of The Liars, Ava and Jade are competing for the same job: Jade has more experience, but Ava is favourite to land the role thanks (Jade thinks) to Ava’s aptitude for office politics.

To make matters worse, the pair share an unspeakable secret, one they know will ruin them both if told.

But with so much at stake, can either trust the other not to talk?

Written by Yvonne
4 comments
“Everything in my story is possible”
What an intriguing thought!
Mailbox Monday
FacebookTwitter
“Georgina Garrett
The birth of a ruthless woman”
‘Trickster’
by Sam Michaels
Blog Tour