This week’s new addition to the virtual shelf  here at Fiction Books, once again comes courtesy of the lovely folks over at NetGalley, although this time the review request came directly from the book’s marketing and publicity firm, JKS Communications, thanks for that, Samantha and I hope that you enjoy a lovely Wedding Day!

The premise for the book is so intriguing, encompassing  a culture and period in history about which I know very little. The research by the author seems to be comprehensive and thorough and I am so pleased to be included in its promotional release.

My post therefore combines a latest release, virtual tour and a great author post, all rolled into one … So without further ado! 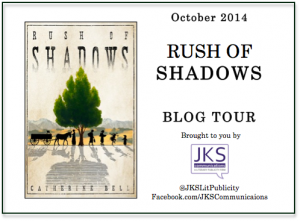 JKS Communications
…
Read all about – ‘RUSH OF SHADOWS’
When American pioneers set their hearts on a California valley where Indians had been living for thousands of years, a period of uneasy appraisal emerged, followed by conflict and soon enough by genocide. The epic greed and violence of the 1850’s and 60’s has been brushed aside by history, conveniently forgotten in the pride of conquest.
Tough-minded and lyrical, Rush of Shadows brings to life the human dimensions of a tragic conflict which corrupted the winners and left the losers to haunt the landscape as shadows, who must survive and find a way for the essential spirit to go on.

Rush of Shadows brings to life two freethinking women; Mellie, a young white woman, who has lived among Mission Indians further south and is inclined to think of the Indians as neighbours; and Bahé, an Indian woman, amazed at the ignorance of the newcomers, who watches as sickness strikes deep and survival becomes harder by the day. Moments of nobility and compassion, ingenuity and forgiveness, qualities which might have prevailed if certain things had been different, ensure that the two women are able to endure the clash of their cultures and come to an unlikely understanding.

I grew up in a New England family with a sense of its past as distinguished and its culture superior, as chronicled in many of my short stories. An early reader, I found in fiction that penetrating experience of other people’s lives that opens a wider world.
The Winsor School, Harvard, and Stanford prepared me to recognize good writing and thinking. I credit work as a gardener, cook, cashier, waitress, and schoolbus driver with teaching me how to live in that wider world.
I have also worked as a secretary, freelance writer, and therapist, served as a teacher in the Peace Corps, and taught in inner city schools. I have lived in Paris, Brasilia, Nova Scotia, Northern California, and Washington, D.C.
.
Culture clashes, even within families, are often subjects of my fiction. I have published stories in a number of journals, including Midway Journal, Coal City Review, Green Hills Literary Lantern, Sixfold, Solstice, and South Carolina Review. My story “Among the Missing” won The Northern Virginia Review’s 2014 Prose Award.
.
I researched and wrote Rush of Shadows, my first novel, over a period of twenty years after I married a fourth-generation Californian and fell in love with his home territory, the Coast Range. The bright sunburned hills, dark firs, clear shallow streams, and twisted oaks were splendid, but the old barns and wooden churches and redwood train station didn’t seem old enough. Where was the long past? Where were the Indians? There was only the shadow of a story passed down by my husband’s grandmother late in life. Born in 1869, she grew up playing with Indian children whose parents worked on the ranch her father managed. One day the Army came to remove the Indians and march them to the reservation, and that was that. She was four years old, and she never forgot.
.
I now live with my husband in Washington, D.C. and visit children and grandchildren in California and Australia. As a teacher at Washington International School, I love reading great books with teenagers.
.
Catch up with all my latest news at my website
Like me on Facebook
…
WHERE I WROTE ‘RUSH OF SHADOWS’
We spent part of every summer with my husband’s family in Mendocino County, California, the most beautiful place I’d ever been, and the emptiest. When I realized it was empty because the Indians, after living there thousands of years, were gone, I began to write about it. I set up my typewriter on the workbench in the basement shop and enjoyed a pleasant isolation for an hour or two. In the mornings I walked a trail along a creek, picking blackberries, thinking about the story. In the afternoons we went to the lake and the children jumped off the float. In the evening, my mother-in- law served pickled beets, coleslaw, corn and pot roast, and Herman and Albertine came by for coffee. They talked about their ranch and the old families, and I realized it was my story they were talking about. It was going to be a lot of work. I didn’t care how much work it was, but how would I find the time?
.
As a teacher, I had summers off, but most of the year writing was catch-as-catch can. I was never quite able to keep to a schedule, never sure when I’d have time. I wrote notes wherever I was. At home, a row house in Washington, I had a desk in the middle of the family, the job, the swirl, and later a door I could close, but only when everything was okay outside, when somebody else was in charge, when people had grown up enough, when it was my turn. I walked in the mornings in Rock Creek Park, through the oaks and beeches, where I could talk to myself about the book. The dogs walked with me and curled up beside me when I wrote, but I had to wait for summer to get real time. 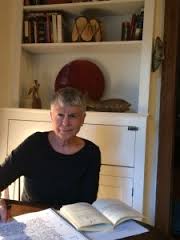 For a couple of weeks every summer, I wrote in the house I grew up in, on the North Shore near Boston. I cleared away the mirror and brushes and bureau scarf and set up my typewriter. In the mornings I walked around the point, where the abandoned Nike missile base no longer guarded the harbor, watching the seaweed on the rocks swirl in the tide. Then I shut my door while the grandfather clocked banged out an hour or two. In the afternoons I played with the children and weeded the raspberry patch and comforted my father, who was recovering from a stroke. I never had enough writing time. It would have been too odd to shut myself off longer. Nobody understood.

“How will I ever get this book written?” I asked my husband. “Let’s rent a place for two or three weeks,” he said, “and you can go there to write.” We found a small, cheap house in West Marin, California, near our grown daughter. I brought research stuff and a computer. In the morning fog I walked under the oak and eucalyptus trees, watching the deer in the grass, the owls, the horses. I studied up on sheep and cattle ranching, made new drafts, drove inland to escape the fog, to see if there was still sun in the world. When I came down with bronchial pneumonia, my son-in-law and daughter rescued and took care of me, and I went back to work.

Another year, we rented a cabin near Yarmouth, Nova Scotia, where the fog was even worse. You could hardly see to find the store. The sink was a stainless steel bowl under a faucet. When you sat on the toilet, your knees banged the opposite wall. I walked in the mornings up hill through slash timber and blueberries, slapping mosquitoes. I read about Indian languages, revised chapters, printed and marked up drafts. The water stopped working and I had to beg a shower from a neighbor. In the middle of one night the children came, driving down from Halifax, and said, “Get a better place. Not here.”

Further east we found a place with birches, where the sun shone. We painted the shed floor green and hammered together an L-shaped desk. I could look out one window to the house and another to the lake, close enough to hear it lapping. My husband stayed a while, then left me alone with nothing to do but write. I worked eight hours a day, sometimes ten or twelve. One afternoon I burst out of the shed and drove 15 miles to the nearest bookstore, to find somebody to tell about what I was doing. On Tuesdays, I drove over to the north shore to have lunch with Nancy. We had been to high school together. Now she was in an apartment in an old hotel, high up with the eagles, looking over the Bay of Fundy. We ate on the deck, talking about our childhoods, about writing, poetry, psychology, the difference between New England and California, Nova Scotia life. I’d found everything I needed: running water, a place to plug in a laptop, nature, sunshine, solitude, simplicity, a friend.

Thanks for stopping by Catherine, it has been great hosting you, here at Fiction Books and thank you for entering into the spirit of the blogging community.

I look forward to reading ‘Rush Of Shadows’ and wish you every success with future book sales.