‘Playing By The Rules’
A Guest Post by Stan Schatt

Having read and enjoyed the first two books in the ‘Frankie Ryan’ paranormal mystery series and just ahead of my reviews being published, I would like to welcome author Stan Schatt to Fiction Books.

Despite the introduction of the paranormal to my usual reading schedule, which I have to admit, took me some way out of my comfort zone, I found myself totally adjusting my perceptions about the genre and enjoying the seamless reading experience which Stan is expert at providing.

Combining the paranormal with a traditional police procedural novel may not be conventional, so Stan would like to share his thoughts about why he feels the mix works so well …

Hi, my name is STAN SCHATT. 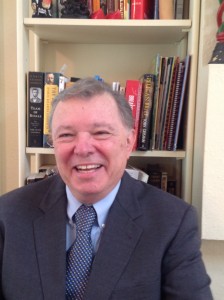 “PLAYING BY THE RULES”

If you think football fans are quick to criticize a player from a rival team who appears to violate a rule, then you haven’t been around fans of mysteries. Of course every genre has its own set of rules. When I write a science fiction novel, for example, I know that I can’t simply have my hero travel faster than the speed of light without an explanation of how he is able to violate such a basic rule of physics. Simply referring to a “warp drive” won’t be enough for some fans of “hard” science fiction. Similarly, when I write a thriller, I know that I can’t interrupt my book to advise readers that everything will turn out fine for the hero because that would take away some of the fun of rooting for the hero to catch the bad guy and survive any final battle.

Silent Partner and A Bullet for the Ghost Whisperer, both fall into the cracks within a couple of categories. They are police procedure novels, but they also deal with the paranormal. That is where it becomes tricky for mystery fans. A mystery is no mystery as far as many fans are concerned if the protagonist doesn’t solve the crime using generally accepted police procedures. That means finding and evaluating clues and eventually identifying the killer via logical deduction. A perfect example of this is the way ace detective Harry Bosch solves crimes in Michael Connelly’s novels. Bosch may go off course when he follows some false clues, but he eventually self-corrects his course and ends up prevailing.
Mystery fans love to solve cases before the detective does. Many of them have become experts of disregarding red herrings carefully placed in strategic places by novelists who want to keep readers guessing until the final chapter. The “rules” for writing police procedure mysteries require the novelist to play fair with readers by not introducing new suspects in the final chapter and by not having a character inexplicitly decide to confess in the final chapter.

What happens, though, when the novelist throws in a paranormal element? Mystery readers don’t want the ghost unraveling the case using her supernatural powers. I’ve handled the problem by having Detective Frankie Ryan pursue the bad guys using the traditional police procedure approach. She follows leads and uses traditional police tools such as fingerprint analysis, polygraphs, etc. Meanwhile, my tabloid reporter with his sassy and sexy ghost companion follows a more meandering path. If I do my homework, Ryan and Josh Harrell should eventually wind up at the same place.

Haunted by her past, Detective Francis “Frankie” Ryan must race against time to solve a double homicide and find a sadistic killer, while the press attacks her as a feminist vigilante who takes the law into her own hands.

Besieged from all directions, the only person she can trust is a tabloid reporter who also writes the Midnight Whisperer’s psychic column, Ask Miss Myrna. He finds to his surprise that he not only has psychic abilities, but that only he can see the sexy ghost serving as his rather inept guardian angel. Is he crazy if he develops feelings for a ghost?

As they search for the killer in a sunny seacoast city’s seamy S&M underside, the two worlds collide, as they begin to question everything they know about sexual identity. How can they find the killer before he strikes again when he defies description?

Silent Partner is a paranormal mystery, a police procedure novel with a female detective that will remind you of Harry Bosch, a ghost story that suggests what lies beyond death, and a comic look at a tabloid where the truth is whatever sells.

Check out those all important first lines here..

One problem I’ve found by writing these books that are hybrids of the paranormal and the police procedure genres is that it makes it difficult for me to reach the right readers who would enjoy such books. Some bloggers who specialize in paranormal books, for example, would like to see more paranormal elements. I’m sure they can’t understand why a rational detective is even needed since someone with psychic powers should be able to solve every crime.
Think for a moment how boring such a book would be. If the paranormal investigator could simply meditate and identify the killer, where’s the mystery or the suspense? Since I’m not interested in having an evil spirit that battles a “good” spirit using magic, these avid readers of paranormal books might not be a good match for my books. Similarly, some fans of police procedure novels might frown at the very presence of the supernatural.

.
I have found that my “sweet spot” consists of police procedure readers who are willing to suspend their disbelief at least temporarily and accept the possibility that there might be some paranormal things that science might not be able to explain yet. It also consists of readers of paranormal novels who are willing to entertain the possibility that a traditional detective could partner with a tabloid reporter with some psychic abilities to bring out the best in both of them.

When the CEO of Zynx, a high-tech startup company, is found dead at his desk, determined Detective “Frankie” Ryan is assigned the case. She learns that everyone entering and leaving the super-secure building is logged in and out automatically—it would take a ghost to get through that kind of security. She enlists reluctant gossip columnist and ace reporter for the Midnight Whisperer Josh Harrell, to help her solve the case. After all, he has his own ghostly assistant, a seductive spirit that only he can see. But can she save Josh and Frankie from the killer?

‘A Bullet for the Ghost Whisperer’, is a good old-fashioned police procedure mystery with a dollop of the paranormal. Sprinkle in a dose of high-tech intrigue, a pinch of Harry Bosch, and a touch of Faye Kellerman’s ‘Rina and Peter’ novels and you have a fun read.

Check out those all important first lines here..

It has been fun writing my Frankie and Josh series so far. Andy is a fascinating character because while she is a guardian angel, she is not really very proficient and still retains some of her unique personality traits. Similarly, Frankie is not perfect. She’s flawed and damaged, but she always tries to do the right thing. Much like Michael Connelly’s Harry Bosch, Frankie is on a mission to fight evil. Finally, tabloid reporter Josh Harrell doesn’t particularly want to be able to see his guardian angel. It complicates his life. He would love to write for the New York Times, but instead he writes for a tabloid that demands that he deal with people a reputable paper would shun. He’s been unlucky in love, and sometimes it seems that even a guardian angel can’t help him in that area.

.
So, as one famous writer said, you need to know the rules first before you can break the rules. I do know the rules, but sometimes I choose to skirt around the edges, not enough to draw a penalty but certainly enough to raise some eyebrows.