‘The Career Inspired Story’
A Guest Post By Lisa Preston

This time around, I am hosting the lovely Lisa Preston, who stopped by with this great guest post, to coincide with the release of her debut novel ‘Orchids And Stone’.

Lisa first came to my attention, when I was contacted by Katie Olsen, representing Little Bird Publicity, enquiring whether ‘Orchids And Stone’ would qualify for promotion / review by Fiction Books. The speedy answer was “of course” and I can’t wait for the book to get to the top of my reading pile.

The complimentary download facility for ‘Orchids And Stone’, was kindly made available by the folks over at NetGalley

How far would you go to help a stranger?

“They’re trying to take me. Help! Help me, please.”

Daphne Mayfield sought a moment of quiet in a park—a break from city life, a tense relationship, and chronic overwork—but then an elderly woman makes a desperate plea. Daphne is reluctant to get involved when she’s not sure what’s happening, but she wants to help the stranger. Is the rambling old lady the victim of a crime or a victim of dementia?

As her unease grows, Daphne can’t let go of the encounter. No matter what her boyfriend or her friends say. No matter what the retired homicide detective warns. Though she knows she’s meddling in other people’s lives, her instincts scream that the danger is real.

With each increasingly bold intervention, Daphne involves herself in someone else’s crisis until she’s in too deep to turn back. She’s not just fighting for a stranger’s life…she’s fighting for her own.

Hi! my name is – LISA PRESTON 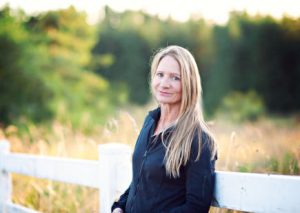 Born in Phoenix, I lived in numerous Arizona towns as a child and later spent several years in California. By young adulthood, I was in Alaska, where I took an interest in, and began participating in, mountain climbing. I climbed in South America on different expeditions, also travelling solo through Europe and Asia.

Climbing left me wanting stronger first-aid skills and the Emergency Medical Technician course I signed up for, included ride-alongs on the Fire Department’s Advanced Life Support ambulances, which exposed me to the rewards of helping people in crisis. I moved to Oregon for training and was soon back in Alaska, pulling 24-hour shifts as a paramedic.

After a number of years, I transferred to the Police Department. My second career started with the position of street officer and I still maintain that it is the most demanding job in law enforcement. In time, I became a detective, working in the Vice unit and later in Crimes Against Children, with a special assignment as a Hostage Negotiator. I went back to the street as a sergeant, and eventually returned to investigations, supervising Internal Affairs.

My husband and I, finally relocated to Washington, the Evergreen State and adopted two former racehorses from a rescue facility. It was then that I turned to writing, working on both mysteries and mainstream novels. I also began competing in the obscure sport of Ride and Tie, a back country trail race that combines running and riding, covering distances of 20-35 miles.

I have written many books on animal care and training, however ‘Orchids and Stone’, is my debut novel.

Different ideas will capture my imagination and ask if they can be in a story. Sometimes they fit together and sometimes they don’t. One notion leads to another and I might write pages that will have to go away later, but I’m sketching, getting to know a character, how he or she speaks or lives, so I just let it flow. Things start to click. I don’t outline before starting, nor do I write one chapter at a time or even in chronological order. If I’m thinking about a scene, conversation, or event that will come later, I page down and write away.

As some readers at Fiction Books already know, I was a police sergeant. In that career, I saw an awful lot of people at their best and worst. In crafting my first thriller, ORCHIDS AND STONE, I particularly wanted to explore the effects of two different, evocative effects in a specific crime scenario.

First, I’ll touch on criminal case dispositions. We like the status called “closed-arrest” which means exactly what you’d think: we solved the case and arrested the offender. Another case disposition is “suspended” which of course means that the case ran cold. We could not prove who did it. We needed another lead, but never found it. No one was charged with the crime.

.
I wanted to let readers feel the haunting effect of a suspended case on the survivors, so you’ll see how Daphne Mayfield’s world is clouded by her sister’s murder. The cracking pain of a sister being murdered sprang into my face when I was in high school. My entire student body attended the funeral of a recent graduate who had been murdered. Thankfully, that case was not suspended and that murderer is still in prison. In any case, survivors’ pain goes on. That day, at the funeral…oh my. One of the victim’s sisters went to speak at the altar, but she managed just two words before she broke up. My sister. I am still rocked by that girl’s raw trauma.

.
When the crime is murder, the lack of closure in a suspended case might leave the survivors’ lives suspended and that is the case with Daphne and her parents—to a tragic extent.

.
I also wanted to dip into what is called bystander syndrome— bystanders see or hear a person in need but do not offer aid. A famous case in New York City was the murder of Kitty Genovese, in which some people chose not to help a woman in mortal danger just yards away. She died cruelly. In the wake of the brutal kidnapping and murder of UK toddler James Bulger, some of the news media called the witnesses who came forward afterwards “The Liverpool 38” and highlighted the fact that they did not intervene when they saw the little boy being led through town by his juvenile captors.

.
Sometimes, the media might present a story with a slant. I wouldn’t want to review a bystander’s inaction or action that was insufficient to stop the problem and ensure a possible victim’s safety. After-the-fact moralizing and pointing a finger at others is not helpful. People can easily be distracted, or not understand a situation, be unsure, or feel unable to intervene. But I wondered, what would it take for a person to intervene for a stranger? And then I took it farther. What would it take to motivate a person to intervene on behalf of a stranger with only a hint of the stranger being in real jeopardy?

How far would you go to help a stranger? On a continuum from tentative to decisive, where would your efforts fall? If the scenario is actually the worst case scenario, then someone’s life is at stake. If that life is particularly vulnerable because of age or infirmity, the incident feels even more urgent.
An ordinary person in an extraordinary situation interests me. Daphne Mayfield is sitting on a park bench thinking about her life; her guy, her job, the kids. The future. And the past. A little old lady approaches, asking for help, claiming people are trying to victimize her. Another woman arrives, apologizes to Daphne and calls the old lady “mother.” The little old lady disavows the other woman and begs for help. Daphne, who is not the typical heroine, has enough baggage to be haunted by the encounter, and then to take some action. When the ante ups, she responds and there we have a thriller.

.
One reader told me she found ORCHIDS AND STONE terrifying because— unlike a thriller with spies in Paris who are embroiled in a massive conspiracy— she could see the novel’s events happening to her, to her sister, to anyone. And I agree, that is particularly terrifying—just as a good thriller should be.