When I invited author James Thayer to consider submitting a guest post, I had no idea that the finished article would be so informative and interesting to read. The piece accompanies a tense historical thriller, combined with a little known piece of world history, resulting in a complex story which I have no doubt is going to completely absorb and consume me … as it has already begun to after just a few short pages.

Hi, I’m JAMES THAYER – The author of ‘House Of 8 Orchids’ 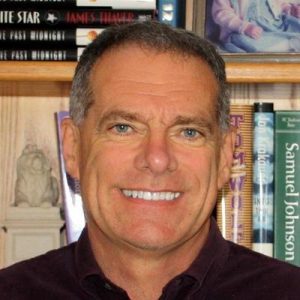 I am the son of an eastern Washington farmer and my wife is a Phi Beta Kappa graduate of Washington State University and of the University of Chicago Law School.

I teach novel writing at the University of Washington extension school, where I received the 2015 Excellence in Teaching Award in the Arts, Writing, and Humanities.

I am the author of thirteen critically acclaimed novels, which have been translated into all major European languages, Japanese and Chinese.  I have recently ventured into the world of non-fiction, publishing a manual for aspiring novelists, ‘The Essential Guide to Writing a Novel.’

When not writing, I enjoy running and have completed more than 30 years of running 20 or more miles a week. I have competed in a marathon (actually, it was two marathons; my first and my last) and many 10 and 12 kilometer races.

I play bass for a garage band, The Toneheads.  What the band lacks in talent, it makes up for in volume.

I live in Seattle with my wife and family.

“THE MOST DANGEROUS PLACE IN THE WORLD”

Tom Wolfe has said that when plotting a story, he first looks for the setting. Chungking—a tumultuous, deadly, war-riven place—is more than a setting in House of 8 Orchids, it’s a critical piece of the book that helps drive the plot. I like to think Tom Wolfe would be proud.

It was the most exotic and turbulent city in the world, and it is the setting for my new novel, House of 8 Orchids. In 1938 Chungking in central China had “refugees from all over China, carpetbaggers, Japanese spies, black marketers, swindlers, merchants, influence-peddlers, beggars—the flotsam of the continent,” according to Max Hastings in his History of World War II, Retribution.

.
Coolies carried water buckets up the city’s 300 slime-covered granite steps on the banks of the Yangtze. The streets were too steep for automobiles, and so were filled with rickshaws and goat carts. The sounds were of crying babies, snorting pigs, yelling vendors, the tick tick tick of mahjong tiles, and the chants of the coolies. The breeze carried the scents of garbage, river mud, charcoal, and horse manure. Many men still wore long Manchu queues, and women with bound, crippled feet were carried along the streets in sedan chairs. When Japanese bombers appeared over the city, citizens fled into stone cave air raid shelters.

.
Trouble is the engine of fiction, and Chungking was filled with trouble. Chiang Kai Shek had made the city his wartime capital. The invading Japanese army was marching toward the city, and so was Mao’s Communist army. A murder could be purchased for a few American dollars, opium dens were found in every dark alley, and outlaw bands roamed the countryside just outside the city’s old walls.
And much of the trouble comes from the Eunuch Chang, the city’s master criminal. Earlier in his life, Chang had been voluntarily castrated so he could become a member of the Empress Dowager’s court, the only livelihood available to him. He became one of 2,000 eunuchs serving the court. When it was discovered he was carrying on a romance with one of the emperor’s nieces—a platonic romance, to be sure—he was flogged and expelled from the Summer Palace. He walked two years to Chungking, and quickly found his calling as a criminal. He is brilliant and cruel in equal measures.

.
The House of 8 Orchids is a compound in Chungking where the Eunuch Chang trains boys for his criminal enterprise, involving assassination and sophisticated extortion schemes. Children are taught about firearms and thievery and swindles. The eunuch makes large payments to the corrupt Chungking police. Secret societies in the city fear him.

.
The hero of House of 8 Orchids is John Wade, whose father was the American consul in the city. When John was five years old his amah was shoved into a row of shelves at the Prosperity Medicine Shop, and a rough hand seized John’s neck, and the boy was carried away, down an alley toward the Yangtze. His kidnapper, the Eunuch Chang, took him to the House of 8 Orchids. John never saw his mother or father again.

.
The Eunuch has raised John, and has trained him to be his hard right-hand man. John has learned to obey the eunuch without question. But now in Chungking, John—raised as a ruthless criminal—may have to betray the eunuch in order to find his humanity.