When author Kate Vane contacted me to request a review for her latest contemporary novel Not The End, I was immediately struck that she had changed genres so radically, since writing her first successful book, Recognition, which falls well and truly into the realms of psychological crime.

Thinking that this sudden, drastic change of direction, could potentially have the makings of a good guest post, I put the idea forward to Kate. Given the alacrity with which she acceded to my request, I have the feeling that this may be the question she has been asked on more than one occasion, so I’ll hand you over to Kate to explain ….

HELLO, I AM KATE VANE

I studied in Leeds and then worked in the city as a probation officer. My first novel, Recognition, is a psychological crime novel set in that same City of Leeds.

I now live on the Devon coast, where I grew up and where my second, contemporary novel, is set. Not The End, was inspired in part by a period I spent working in a local authority cemeteries department.

I now work for a charity in Exeter. 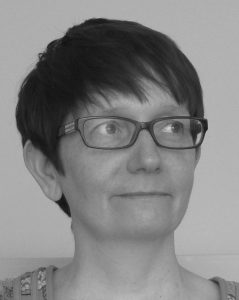 WHY I TURNED MY BACK ON A LIFE OF CRIME

Authors are always being advised to develop a brand. Write a particular genre, in a particular style. Better still, write a series. That way, people will know what you do. If they like it, they’ll come back. So why did I go from writing crime fiction to a literary novel?

My first novel, Recognition, is a psychological crime novel. At the time that I wrote it, I was obsessed with crime fiction, from Ruth Rendell’s claustrophobic domestic dramas, to the epic scope of James Ellroy’s LA Quartet, to Val McDermid’s pacy procedurals.

Nat Keane never forgot her first murder. Sandie Thurston was killed and mutilated in her own bed. Five-year-old Amy lay beside her, soaked in her mother’s blood.

Nat was the first police officer on the scene. She was the family liaison officer who got close to the family. Too close. When a man was convicted, she walked away, lonely and broken.

Ten years on she has another life. She has a job she loves counselling trauma victims and a home with her partner, Dylan, a criminal lawyer. So when Martin, husband of the murdered Sandie, asks her to work with him and Amy, why does she agree to go back?

Amy’s evidence was key to getting a conviction. Now the media are hinting that she got it wrong. Martin is tortured by a guilt he won’t explain. At fifteen, Amy is alternately needy and hostile – a devoted daughter who deceives her father, a sheltered child who can’t stop taking risks.

As Nat is drawn into the family’s secrets, is she helping them find the truth or complicit in their lies? Who did kill Sandie? And why, just when Nat needs Dylan’s support, is he distracted by a controversial case of his own?

Recognition is a compelling novel of psychological suspense, set in and around Leeds.

Crime fiction is a way to explore areas of society which are often ignored in other types of fiction. People who live in poverty and hopelessness, whose lives are touched by loss or addiction or illness, are often given a voice by crime writers.

The key question for me was not whodunnit, but why. In my favourite crime fiction, the story is driven not just by contrived plot twists and red herrings but by the inner conflicts of the characters themselves. They say one thing but mean another. They believe they want something, but deep down they want something else. They lie to others but they also lie to themselves.

On a more prosaic level, I think I was attracted to writing crime fiction because it gave me a template. I was confident with character, but less so with plot. You might think that in that case, it would be harder to write crime, where plot is crucial, but I felt it was easier. I knew how the book had to start – with a murder – and how it had to end – with the identification of the killer. I just had to work out what went in between.

Recognition was, in many ways, a difficult book to write. The subject matter was dark. It’s the story of a family who are still traumatised by a murder ten years on, who have to face the possibility that the wrong person was convicted. When I thought of writing another book, I felt like I wanted to be in a happier place.

My reading habits had also changed. I’d found new authors who were both funny and serious. Books where you don’t necessarily know the journey before you start. Books that don’t, on the face of it, have the high stakes of a murder investigation, but still have you completely absorbed. That, in a way, seemed a much tougher challenge. I tried to think about how they do it and what I could learn.

Not the End is set largely in a Devon seaside town. It’s the story of three people whose lives are changed by the death of a woman they never met. They are the woman who finds Maud’s body, the cemetery manager who organises her funeral and the heir hunter who is trying to trace her family.

There’s a summer heatwave in Dormouth, the Devon seaside town and former home of the artist Hugh Bonnington.

No one pays much attention to octogenarian sea swimmer Maud Smith, recently arrived from Portugal. But when she drowns and her body is washed up on the beach, she changes the lives of three people she never met.

Philosopher-drunk Neil, the cemetery manager, plans Maud’s funeral then finds that art has a funny way of interfering with life.

With wry humour and sharp observation, Not the End is a contemporary novel about love, loss and the therapeutic possibilities of knitting.

The challenge the characters face isn’t solving a murder but working out how to live their lives, when events or other people or their own thoughts mean their world no longer makes sense.

The two books are superficially very different, but the fundamentals are the same. I am still preoccupied by character and motivation. For me, every book, regardless of genre, is an attempt to answer the question, why?

The narrative techniques that draw readers into a crime novel are the same for literary fiction – complex, believable characters, pacy dialogue, chapters with a clear narrative drive that end on a hook so you want to read just a few pages more.

All novels should surprise you. They should immerse you in a world. They may even make you look differently at the real one. So we shouldn’t make too much of the distinction between genres.

Thank you so much for stopping by today Kate and allowing us all into your personal writing space. I am looking forward to reading Not The End and shall definitely be adding Recognition to my wishlist.