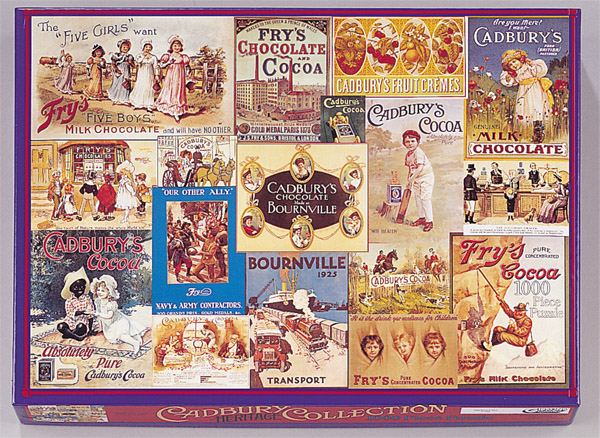 For over 150 years, the Cadbury name has appeared on packaging, point-of-sale and advertising material. Gibsons is proud to introduce a range of 500 and 1000 piece puzzles featuring a wide selection of those images obtained from the Cadbury archives.

A one-man grocery business opened in 1824 In Bull Street, Birmingham, UK by John Cadbury, was the foundation of Cadbury Limited.

In 1919, Cadbury Brothers merged with another well-known company, J.S Fry & Sons of Bristol, with famous brands of its own such as Fry’s Chocolate Cream and Turkish Delight.

The distinctive purple and gold house colours were introduced at the beginning of the century and were used on sales catalogues and seal designs on special boxes and stationery. It was not until 1952 that the script logo, based on the signature of William A. Cadbury, was used across major brands. 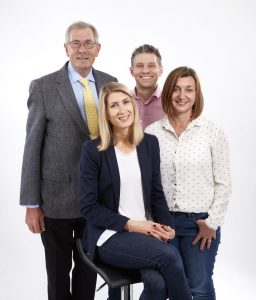 Founded in 1919, Gibsons have been entertaining generations for almost a century and are proud to have such a rich, British heritage. They are as devoted as they were on day one to providing fun family pastimes for all ages.

What makes their jigsaw puzzles different from other brands is the high quality of the materials they use. Their jigsaws are manufactured from blue-backed puzzle board that is made from 100% recycled materials and cut thickly to ensure each piece slots satisfyingly into place.

They commission a wide range of talented artists to paint their jigsaw puzzle images, all of whom have distinct styles and themes to ensure there’s something for everyone in their varied puzzle collection.

Having started with just 6 puzzles, they now have over 250 titles in their collection that range from 2 to 2000 pieces!
They also have a broad selection of best-selling board games, including 221b Baker Street, Pass the Bomb and Diplomacy and a selection of branded gifts that have been inspired by much loved British brands, such as Marmite, Pringles and Mr Men.

As well as bringing families together with their jigsaw puzzles and games, they are also brand sponsors of the charity Jigsaw4u, a community-based charity in SW London that helps children who have been affected by complex social, emotional and bereavement issues put the pieces back together. They do all sorts of fund-raising to support Jigsaw4u, including bake sales, donations and even a sponsored puzzle-a-thon!

Keep up with all the latest news at the Gibsons website

As usual, being the thrifty person I am, this jigsaw, like so many others, was purchased used, from a charity shop. This is always a risky strategy, as there is no way of guaranteeing that a puzzle is going to be either in reasonable condition, or have all its pieces!

I therefore generally try to stick to the more well known and respected brands of jigsaw puzzles, in an attempt to minimise the quality risk, but do have to rely solely on the integrity of the person donating the jigsaw, that all the pieces have been accounted for and are in good condition.

Clearly this particular item has been completed more than once, given the slightly ‘weathered’ appearance of the box. However the pieces were in as good as condition as the day it was bought, they fitted together like a dream and gave a finished result which was colourful, crisp and clear.

Which is just as well, given that I am something of a chocoholic given half a chance and Cadbury always was and still remains, my chocolate of choice, despite any recent recipe changes following the company takeover.

Even less healthy is the fact that I only enjoy milk chocolate and never dark. If dark chocolate was all that was available, I would probably choose to go without, so I guess that my addiction might be broken if all milk chocolate was withdrawn from sale tomorrow!

My favourite is undoubtedly a bar of Cadbury Dairy Milk chocolate, closely followed by a Cadbury Creme Egg 🙂 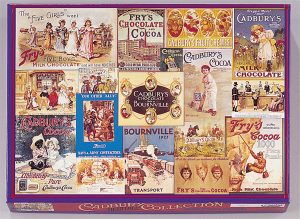 I personally do not agree with ‘rating’ a purchase, as the overall experience is all a matter of personal taste, which varies from person to person. However some review sites do demand a rating value, so when this review is posted to such a site, it will attract a 4 out of 5.