Clicking on the image will link you to the Amazon page, where by hovering your mouse over the image there, you can magnify individual sections.

Childhood Memories is part of the Nostalgia range and is a delightful 1000 piece puzzle that captures early childhood memories of traditional and classic games.

Included in this fantastic collage of traditional illustrations are some iconic games and old favourites – Snakes and Ladders, Tiddledy Winks, Blow Football and Ludo – are all featured. Building this puzzle is bound to take you back to your childhood – maybe you didn’t play with these exact versions, but I expect you have played a version of ‘Fish Pond’ and ‘Old Maid’ and we have all tried to ‘Tiddle a Wink’ at some point.

The artwork on the boxes featured would be considered old-fashioned now, but certainly reflects the attitudes of the time, so take the opportunity to reminisce and enjoy looking at images of old favourites, as you piece together this delightful 1000 piece Falcon Deluxe puzzle.

Falcon’s de luxe range was first introduced in the 1970’s. With it’s distinctive blue backing card, using precision printing and cutting techniques, it brought together beautifully finished high-quality Fine Art images and popular collections – from richly detailed cottages and nostalgic countryside scenes to striking one-off images. They celebrate Falcon’s distinctive brand values of heritage and innovation. We choose only the most suitable illustrations for our jigsaws and in addition to this the cardboard used is of the highest quality. We die cut each jigsaw piece carefully, so when the jigsaw is completed, it looks just like a poster. Making jigsaws has always been, and will always remain, our passion. 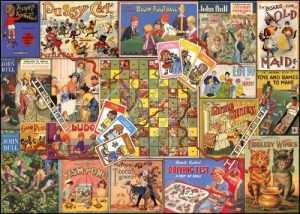 As always, buying a ‘quality’ jigsaw puzzle, from a renowned manufacturer, paid off, despite the obvious age of the product. As a previously owned item, purchased from a charity shop, I was pleasantly surprised that the pieces were as crisp and bright as when they were new and that the completed scene locked and fitted neatly together, almost seamlessly,

This was a traditional jigsaw puzzle, with no surprise shaped pieces, or sneaky fitting techniques.  Perhaps only showing its true age, in as much as there was no information sheet provided either inside, nor on the box itself, so I was unable to learn and share any facts about the design artist, or the illustration content; something which is almost taken for granted these days, when purchasing from one of the high-end manufacturers.

In fact, whilst I recognised many of the games from my own childhood, there were some I didn’t know at all. I have researched those as thoroughly as possible, however that has made it quite difficult to actually define a possible time era for the nostalgia journey.

Apparently, the original game of ‘John Bull’, was an old English pub game in which players would take it in turns tossing coins or stones onto a four-by-four grid of squares, randomly numbered from 1-16, in an effort to score as many points as possible.

Whilst the image of ‘Game Of Puss’ (bottom left of picture), is possibly a 1900s USA magazine advert.

Similarly ‘Pussy Cat Puzzle Box’ (top left of picture), would appear to be just that – the image as seen on a jigsaw puzzle box, which apparently is now quite sought after and fetching a good price at auction.

I decided to post this short product review on Amazon and as always with this site, I needed to give the jigsaw a star rating, so I have awarded it 4 stars. This product is part of my personal collection, bought and paid for by myself, from the local charity shop where I volunteer and I have not been asked for, nor received, any payment for a review.