This is a fun meme for the weekends, count Friday and Monday as part of your weekend and have even more fun!

“This is a weekly meme, where you can get to display all those beautiful, funny, crazy and even those that make you think book covers you come across each week. I don’t know about the rest of you, but I love looking at different book covers. You may not be able to judge a book by its cover, but they are sure fun to look at.

The Blog Hop is hosted by Yvonne, over at ‘Socrates’ Book Review Blog‘ and the rules for taking part are pretty simple:

1. Cross to ‘Socrates’ Book Review Blog’. Take the button at the top of her post and post it on your blog.

3. Sign up with Mr. Linky at the bottom of the page. Please use the url that links directly to your cover art post.

4. Visit other blogs on the list to see what covers they are featuring this week.

This week I am featuring a book from one of my most favourite genres, the ‘Crime Thriller’.

I am also featuring Tim Weaver, a new to me author, whom I shall be featuring in a later post.

Whilst carrying out some research about Tim for said post, I unearthed not only this great duo of books, but some fantastic cover art for my ‘Cover Art Weekend Blog Hop’ and best of all, discovered that Tim lives only a few miles from my own home town, which means that I am able to promote a local author into the bargain …

I chose the cover of this second book over that of the first, because it really spooked me. We have lots of disused railway and mining tunnels in this part of the country, many of which run under the towns and cities, especially in the City of Bath, where structural damage to the homes and businesses above is quite common and very expensive to remedy. I suffer quite badly with claustrophobia and a fear of the dark, so will avoid using the railway and especially the underground (subway) network, at all costs. Even driving through road tunnels is quite off-putting and to be endured for a short time only, so the thought of being pursued down a tunnel similar to the one illustrated on this book cover, is completely horrifying … 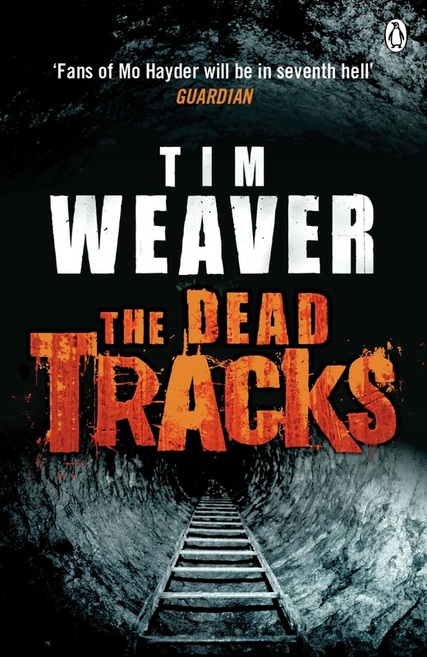 A serial killer more terrifying than you could ever imagine . . .

Seventeen-year-old Megan Carver was an unlikely runaway. A straight-A student from a happy home, she studied hard and rarely got into trouble. Six months on, she’s never been found.

Missing persons investigator David Raker knows what it’s like to grieve. He knows the shadowy world of the lost too. So, when he’s hired by Megan’s parents to find out what happened, he recognizes their pain – but knows that the darkest secrets can be buried deep.

And Megan’s secrets could cost him his life.

Because as Raker investigates her disappearance, he realizes everything is a lie. People close to her are dead. Others are too terrified to talk. And soon the conspiracy of silence leads Raker towards a forest on the edge of the city. A place with a horrifying history – which was once the hunting ground for a brutal, twisted serial killer.

A place known as the Dead Tracks. . .

Sounds great to me, I’m going to be reading this just as soon as possible, have a great weekend everyone.