The outbreak of the Second World War in September 1939 led to a deepening community spirit, a feeling that each should do his or her bit towards the war effort. As the scarcity of raw materials increased, so the packaging of everyday goods had to adapt. The labels around cans were reduced, the quality of cardboard was lowered, less printing ink was used and with fewer colours. Even products that had previously sold in tin containers were replaced by card boxes or bottles.

During the early years of the 1940s, rationing of many commodities was introduced – bacon, butter, meat, eggs, sugar, jam, canned foods, tea, sweets and other groceries were added to the list of restricted foods. Everything from soap to saucepans were in short supply. Families were encouraged to economise on fuel, ‘Dig for Victory, return empty jam jars and save waste paper for the salvage collector.

Even after the end of hostilities in May 1945, shortages and queues continued throughout the ’40s; dried egg and dried milk powder still came from the USA, and the slogan for growing your own vegetables now changed to ‘Dig for Plenty’. 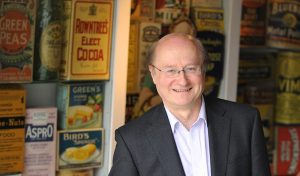 The items that make up this series of jigsaws come from the Robert Opie Collection, which is housed at the Museum of Brands, Packaging and Advertising in London’s Notting Hill, although it was formerly housed in Gloucester, which is where I visited to view it.

“Piece together the products to picture the past once more

and taste the texture of this evocative time.”

Even though the 1940s was very much the time era of my parents and grandparents, I recognised many of the products depicted in this jigsaw, which are very much still with us today, here in the UK ! However, without having spent so long working on the puzzle, I probably wouldn’t have realised it from their appearance.

In today’s consumer marketplace, packaging and presentation are most definitely king with the average shopper and the colourful boxes, jars and tins, with their enticing advertising slogans, bear little or no resemblance to the no nonsense, basic look of the war time weekly basket.

Talking of baskets, did you spot the wicker shopping basket in the picture? no plastic carrier bags in sight here! Even as late as the 1960s, I can remember my mum sending me off to the local grocery, with a shopping list, just the right amount of money with which to pay for the goods and the ever trustworthy wicker over arm basket.

Even then, only a small amount of the overall weekly shop was pre-wrapped and stories my mother-in-law in particular can tell, of the early post war years working in her local branch of the Co-operative Store, are so interesting. She weighed out sugar and salt by the ounce and wrapped it in twists of paper; sliced cheese to the required weight by sight, with the aid of a very lethal looking cheese wire; and portioned butter into permissable weights with the aid of butter pats. All skills we have long abandoned and forgotten, in this pre-packaged age of glass and plastic.

I realise that through necessity and rationing, as much food as possible needed to be packaged suitably for storing in air raid shelters, however I’m not sure that I could stomach the thought of eating mashed potato, or dried eggs from a tin and the bottle of ‘Camp’ coffee brings back horrid childhood memories, especially when it came served with a generous amount of canned condensed milk! Is it any wonder that I hate milk of any description, so much now!

I visited the Robert Opie Collection, when it was housed in its original location at Gloucester Docks and it was an amazing experience. The displays were well thought out and presented and there were simply so many products and services represented, that a manufacturer such as Gibson’s would have no difficulty for some time to come, in obtaining material in abundance for their jigsaw puzzle design ideas.

The changing face of familiar brands can be seen, along with the products that have come and gone, but whatever my age, many of them have played a part in my life and my memories.

A quality product, a great idea concept for a ‘series’ jigsaw and definitely fun to do !

I personally do not agree with ‘rating’ a purchase, as the overall experience is all a matter of personal taste, which varies from person to person. However some review sites do demand a rating value, so when this review is posted to such a site, it will attract a 5 out of 5.

When an impossible murder happens during a medieval pageant show in London, Inspectors Cockrill and Charlesworth race to discover how it was possible, and who is the culprit.