This is my latest compilation jigsaw and one of the most enjoyable and satisfying I have done for some time.

This is also the first Falcon/Jumbo jigsaw puzzle I have purchased and I have to say, that the quality and finish is impeccable.

All the images featured in this jigsaw puzzle were illustrated as individual ‘seaside’ postcards and each one was printed with a humourous phrase.

In 1894, British publishers were given permission by the Royal Mail to manufacture and distribute picture postcards, which could be sent through the post. The first UK postcards were produced by printing firm Stewarts of Edinburgh and early postcards were pictures of famous landmarks, scenic views, photographs or drawings of celebrities and so on. With steam locomotives providing fast and affordable travel, the seaside became a popular tourist destination, and generated its own souvenir-industry: the picture postcard was, and is, an essential staple of this industry.

Anyone over a certain age, will remember the time of the summer fortnight factory shutdown, when, en masse, the thousands of factory workers and their families would take to the trains and roads, heading off for their summer holidays at the seaside. Not for us the privilege of jetting off to warmer climes, we had to take our chances with the great British weather and head for the coast, where come rain or shine, we would settle ourselves on the beach by day and parade up and down the promenade by night.

Part of the annual ritual would be to wait until the second day, then scour the local beachfront shops for an appropriate postcard to send to relatives and friends back home, with space for just a few lines to let them know how much fun you were having, even though you had probably only just arrived, but you had to send early to avoid the possibility that the Post Office wouldn’t deliver your precious greetings before you had got back home!!

There were always plenty of the traditional scenic postcards, which were the only suitable choice for elderly relatives, however, lurking in the higher recesses of the display stand, out of reach of younger hands and eyes, there was always a selection of the slightly more risque, humourous postcards, meant only for the eyes of close friends and workmates….

THE ARTIST – DONALD McGILL (‘the Picasso of the pier’) 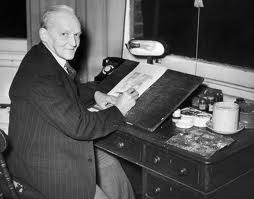 Donald McGill, was born and spent most of his life in London. After losing a foot in a rugby accident at school, he became a naval draughtsman, until a relative, after seeing a card which Donald had illustrated for a sick nephew, encouraged him to study art and the rest is history!

Donald was known as the ‘King Of Saucy Postcards’, his designs selling millions between 1904 and 1962. These wonderfully witty illustrations only earned him up to three guineas a design and many of them were banned and censored as obscene, but today his original artwork can fetch thousands, with the censored postcards going on sale for the first time in more than fifity years. In 2010, the Tate displayed some of McGill’s artwork, which would have pleased the artist as he always felt that he should have done more with his talent. A museum dedicated to exhibiting some of Donald’s more than 12,000 cards and illustrations, has also opened on the Isle of Wight.

MY THOUGHTS ABOUT THIS JIGSAW PUZZLE

The picture content was colourful, crisp and clear. The overlapping images and individual border arrangements, were an unexpected challenge. The traditional starting point with jigsaw puzzles of completing the edge pieces first, was almost impossible, given the similarity in the colouration and design of said pieces, so starting from the various images, working out to complete the edge pieces almost last, was the only feasible option which worked for me.

All the images featured in this jigsaw puzzle were illustrated as individual postcards and each one was printed with a humourous phrase, although almost as deference to the bygone age of censorship, the full and inclusive commentary about both the images and their original designer, which was most interesting and informative, was relegated to the back of the box.

Re-live the good old days of classic English holidays by the sea and indulge in the humour of yesteryear.

I decided to post this short product review on Amazon.co.uk and as always with this site, I was compelled to give the jigsaw a star rating, so I have awarded it 4 stars. This product is part of my personal collection, bought and paid for by myself and I have not been asked, nor received any payment for a review.

Written by Yvonne
6 comments
‘Hovis Heritage’ Jigsaw Puzzle By Gibsons
FacebookTwitter
When Food And Fiction Combine …. A Tasty Treat Is In Store!

Ever wondered what it’s like to be a juror in a high-profile celebrity trial?

Well, now you don't have to.

Step inside the jury room to… https://www.instagram.com/p/B75B-FdA6HG/?igshid=iytitfz4dkxq