“Sections In The Bookstore”

I came across this quote on Goodreads and although I can’t quite remember which member actually listed it,  I’m not ashamed to admit that each and every scenario was one I could instantly recognize and relate to, and may explain why just about every available inch of space in our home, is crammed full of books!

How could I not include it amongst my own favourite quotes?

Whilst I am not certain whether the book the words were from, is one I would be rushing to read, the premise is somehow oddly intriguing and alluring …

If On A Winter’s Night A Traveller

… is a marvel of ingenuity, an experimental text that looks longingly back to the great age of narration–“when time no longer seemed stopped and did not yet seem to have exploded.” Italo Calvino’s novel is in one sense a comedy in which the two protagonists, the Reader and the Other Reader, ultimately end up married, having almost finished If on a Winter’s Night a Traveller. In another, it is a tragedy, a reflection on the difficulties of writing and the solitary nature of reading. The Reader buys a fashionable new book, which opens with an exhortation: “Relax. Concentrate. Dispel every other thought. Let the world around you fade.” Alas, after 30 or so pages, he discovers that his copy is corrupted, and consists of nothing but the first section, over and over. Returning to the bookshop, he discovers the volume, which he thought was by Calvino, is actually by the Polish writer Bazakbal. Given the choice between the two, he goes for the Pole, as does the Other Reader, Ludmilla. But this copy turns out to be by yet another writer, as does the next, and the next.

The real Calvino intersperses 10 different pastiches–stories of menace, spies, mystery, premonition–with explorations of how and why we read, make meanings, and get our bearings or fail to. Meanwhile the Reader and Ludmilla try to reach, and read, each other. If on a Winter’s Night is dazzling, vertiginous, and deeply romantic. “What makes lovemaking and reading resemble each other most is that within both of them times and spaces open, different from measurable time and space. 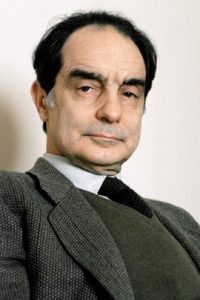 Italo Calvino was born in Cuba and grew up in Italy. He was a journalist and writer of short stories and novels. His best known works include the Our Ancestors trilogy (1952-1959), the Cosmicomics collection of short stories (1965), and the novels Invisible Cities (1972) and If On a Winter’s Night a Traveler (1979).

His style is not easily classified; much of his writing has an air of the fantastic reminiscent of fairy tales (Our Ancestors, Cosmicomics), although sometimes his writing is more “realistic” and in the scenic mode of observation (Difficult Loves, for example). Some of his writing has been called postmodern, reflecting on literature and the act of reading, while some has been labeled magical realist, others fables, others simply “modern”.

SECTIONS IN THE BOOKSTORE:

.
– Books made for purposes other than reading

.
– Books read even before you open them, since they belong to the category of books read before being written

.
– Books that if you had more than one life you would certainly also read, but unfortunately your days are numbered

.
– Books you mean to read, but there are others you must read first

.
– Books too expensive now and you’ll wait ’til they’re remaindered

.
– Books too expensive now and you’ll wait ’til they come out in paperback

.
– Books you can borrow from somebody

.
– Books that everybody’s read, so it’s as if you had read them too

.
– Books you’ve been planning to read for ages

.
– Books you’ve been hunting for years without success

.
– Books dealing with something you’re working on at the moment

.
– Books you want to own, so they’ll be handy just in case

.
– Books you could put aside, maybe to read this summer

.
– Books you need to go with other books on your shelves

.
– Books that fill you with sudden, inexplicable curiosity, not easily justified

.
– Books read long ago which it’s now time to re-read

.
– Books you’ve always pretended to have read and now it’s time to sit down and really read them

Written by Yvonne
‘The Bizarre Bookshop No. 2’
FacebookTwitter
The Sunday Salon