It is hosted by Kathy, over atBermudaOnion’s Weblog. You can either stop by and leave a link to your own ‘mystery’ words of the week, or just browse the eclectic mix of words that others have discovered, there is always a great selection.

My book choice from a couple of weeks back, contained so many great words, that I split them into two separate posts, so here are my remaining words from

“Despite a REDINGOTE, fur TIPPET  and gloves, Eulogy shivered and not just from cold.”

REDINGOTE ….From Wikipedia, the free encyclopedia …. The redingote is a type of coat that has had several forms over time. The name is derived from a French alteration of the English “riding coat”

The first form of the women’s redingote was in the 18th century, when it was used for travel on horseback. This coat was a bulky, utilitarian garment. It would begin to evolve into a fashionable accessory in the last two decades of the 18th century, when women began wearing a perfectly tailored style of the redingote, which was inspired by men’s fashion of the time. Italian fashion also picked it up (the redingotte), adapting it for more formal occasions.

The men’s redingote was an 18th century or early 19th century long coat or greatcoat, derived from the country garment with a wide, flat collar called a frock In French, redingote is the usual term for a fitted frock coat. The form a men’s redingote took could be of the tightly fitting frock coat style, or the more voluminous, loose “great coat” style, replete with overlapping capes or collars, such as a “garrick” redingote. 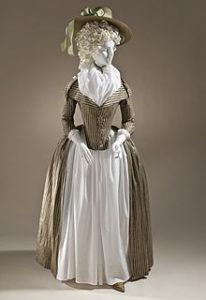 TIPPET ….Definition from the Free Dictionary

1. A covering for the shoulders, as of fur, with long ends that hang in front.
2. A long stole worn by members of the Anglican clergy.
3. A long hanging part, as of a sleeve, hood, or cape. 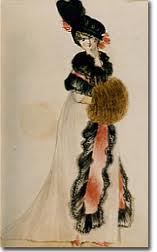 -.-
2 …. LAVAGED
“Fortunately he was skilled and within minutes the shot was extracted, the wound LAVAGED and tissues repaired the best any mortal man could.”
LAVAGED … Definition from Dictionary.com
Origin: 1890–95; < French: literally, a washing, equivalent to lav(er) to wash (< Latin lavāre) + -age
noun 1. a washing.
2. Medicine/Medical.
a.cleansing by irrigation or the like.
b.the washing out of the stomach.
-.-
3 … DEBRIDED and NECROTIC
“The following morning sweat beaded his brow and, calling on Dr. Foster’s knowledge, she DEBRIDED the fresh NECROTIC tissue, applied a clean poultice …”
DEBRIDED … Definition From yourdictionary.com

noun: -Surgery the cutting away of dead or contaminated tissue or foreign material from a wound to prevent infection

adjective: – 1. The death or decay of tissue in a particular part of the body, as from loss of blood supply, burning, etc.

2. (In Botany) The death of plant tissue, as from disease, frost etc.
-.-
I had to smile at those last three, medically biased words …. I guess you can take the author out of the vet, but you can’t take the vet out of the author!
-.-
My thoughts about this lovely, evocative book, can be found by clicking here
-.-

An absolutely beautiful, emotional and unforgettable read that will sweep you away to a gorgeous Scilly isle... 💙

Memories of the Cottage by the Sea by @RebAlexander1 is now available to request on #NetGalley!

If you’re looking for a mind-blowing thriller that will keep you on your toes, we’ve got you covered!