Due to be published on 1st October 2019 by Thomas & Mercer, the lovely folks at NetGalley have provided this early bird, easy to access download, at the request of the lovely Katie, representing Little Bird Publicity. I am always pleased to be invited to work alongside this well organized little team and I look forward to reading Little Voices as soon as possible. 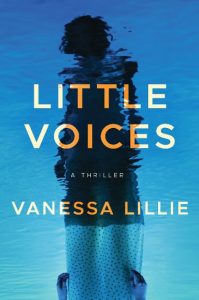 The voice in her head says he’s guilty. She knows he’s innocent.

Devon Burges is in the throes of a high-risk birth when she learns of her dear friend’s murder. The police quickly name another friend as the chief suspect, but Devon doesn’t buy it—and despite her difficult recovery, she decides to investigate.

Haunted by postpartum problems that manifest as a cruel voice in her head, Devon is barely getting by. Yet her instincts are still sharp, and she’s bent on proving her friend’s innocence.

But as Devon digs into the evidence, the voice in her head grows more insistent, the danger more intense. Each layer is darker, more disturbing, and she’s not sure she—or her baby—can survive what lies at the truth. 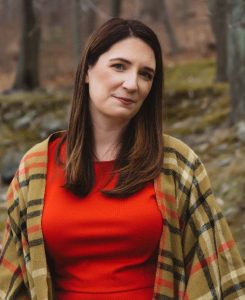 With over fifteen years experience in marketing and communications, Vanessa edited for an e-publisher for two years, before leaving to devote more time to her own stories and online writing course addiction.

Now, smitten with the smallest state, she proudly calls Rhode Island home with her husband and son, where she enjoys organizing book events and literary happenings in and around the Providence area.

She proudly likes to tell people about winning a poker tournament in St. Martin to sound interesting, but most of her time is spent writing on her phone at play dates 🙂

Keep up with all Vanessa’s latest news at her website

IN CONVERSATION WITH VANESSA LILLEY

Q: Little Voices is your first novel. Can you tell us a little bit about the inspiration for this story — was it an idea you had in mind for a long time before writing and getting it published?

A: As with so much of being a new parent, Little Voices began with sleep, or lack of sleep. My three-month-old son would not nap unless he was on me. I wore him in a baby wrap, but I had to move to keep him sleeping. Luckily, it was early spring, and I could amble through my neighborhood on the east side of Providence, Rhode Island. On these long, daily walks along Blackstone Boulevard, where Little Voices opens, I often imagined another mother wearing her baby like me. Scenes began to form, characters began to talk, and I pictured this mother trying to solve a friend’s murder after another friend is accused of the crime. I imagined her not listening to critics who questioned her sanity, and I envisioned how she believed in herself and her abilities, even if she was the only one who did.

It was 15 months after my son was born that I was finally able to write this new mother’s story (related to him being in daycare two days a week). I wrote Little Voices during National Novel Writing Month and edited for about a year before querying to find my wonderful agent and publisher, a goal I’d been working toward for over a decade.

Q: We see the novel’s protagonist, Devon Burges, struggling with her roles as a wife, mother and friend as she delves deeper into investigating Belina’s murder. Why was it particularly important to you to show the reader all these aspects of Devon’s life?

A: The motherhood aspect of the novel is what I was (and am) living. I read books for connection, and I write them for the same reason. I wanted to explore these new parts of myself and my early months as a mother, but within the thriller genre I love.

I’d also moved to Providence, Rhode Island in my early 30s and found it difficult to make new friends. Itwasn’t until my pregnancy group and new-mom group that I really started forming new friendships. I wondered a lot if I was giving enough. It’s a worry that extended to my relationship with my husband and family. Logically, I knew that as a new parent, I had so little left to give, but I still felt a lot of guilt. I wanted to explore those feelings of what we give and take in our closest relationships.

Q: Little Voices keeps readers gripped until the very end as Devon tries to uncover the truth about what happened to Belina. How did you approach plotting and pacing this novel, and could you give us your tips for building suspense when writing a mystery or thriller?

A: This is my debut, but it’s not the first book I’ve written. The other two that came before it, I’d worked on for about 13 years purely in a state of “pantsing,” or writing by the seat of my pants. Every time I sat down, I just let the story take me away. Looking back, this was a good way to spend time, as I needed to clock some hours (or years) to get better at the craft of writing. At the end of that decade, I knew I needed to find another way to write if I was going to find an agent and publisher.

When I had queried and had those other books rejected, the agent often noted that they liked the writing but the plot or structure wasn’t working. The good news was that I could fix those problems with enough hard work. So I sat down with Donald Maass’s Writing the Breakout Novel workbook and made myself learn how to plot and outline. There were plenty of surprises as I was drafting and editing, and I did let my mind wander as I used to, but I had the structure in place to keep everything moving forward. I would also highly recommend Save the Cat Writes, a Novel by Jessica Brody for anyone wanting to put the structure in place at any stage of writing.

I also want to note that in those early weeks when I went back to writing after my son was born, I felt guilty. The negative postpartum voice in this story is not so separate from an inner critic who said I should be doing things for my son, not myself. But like my main character, I fought those critical, mom-guilt “little voices” (and continually do), so I can nourish my whole person, not just the part that is a mother.

Q: You deal really sensitively with the difficult issue of postpartum psychosis, a condition that isn’t often touched upon in fiction, particularly in the mystery, thriller, or suspense genres. Why was it important to you to explore this topic, and how did you go about researching it?

A: Postpartum depression affects one in eight families, possibly more, as I imagine many new parents are like me and ignore their own crying and anxiety. That said, while I was never diagnosed, I am very aware of how difficult being a new parent can be through my own struggles. Looking back, there were so many raw moments, and while I think we generally say how hard it is to be a new parent, I still felt a little blindsided.

Outside my own experiences, I was in a new-mom-group for the first year of my son’s life. Every week, I heard other women sharing their ups and downs, often through tears, and I felt shocked at the difficulty, and I wanted to read about it. I longed for a book with a protagonist struggling postpartum, but also thriving as she rediscovers herself. I also spoke with a friend who is a postpartum therapist about diagnosed postpartum disorders, and she was tremendously helpful in sharing information, presentations, and resources.

Parenthood is a strange, lonely planet that so many inhabit. In those early months, I wanted to read about the psychological complexities new parents can face: terror and elation, exhaustion and euphoria, isolation despite constant physical contact, and loneliness while never being alone. I hope this book will connect me with others who want to explore the difficult paths parenthood takes us down. This is the book I wanted to read as a new parent who loves dark and twisty psychological thrillers.

Q: The novel is set in Rhode Island, where you yourself live, and you include so many details specific to the state that give Little Voices a strong, vivid sense of place. Did you always intend for the setting to be so integral to the novel, and why do you think Rhode Island is the perfect setting for this story?

A: I’m from a small town in Oklahoma, and I’ve lived in Kansas City and Washington, D.C., but Rhode Island is the first place I’ve lived that I’d call home. I fell hard and fast for the smallest state. I wanted Rhode Island to be front and center to my main character’s experiences because it was such a powerful part of my own postpartum life. It felt natural to make this novel a sort of dark love letter to Rhode Island because it truly captured my heart and mind.

Q: Devon has a really interesting backstory, which is key to understanding her motivation for investigating Belina’s death. Is hers a story you intend to expand on, and would you be keen to explore other parts of her past in future books?

A: Absolutely—if readers want more of Devon, I’d be thrilled to continue her story. I’ve been thinking about Devon returning to Kansas and helping her brother out of a dangerous situation while also facing her own complicated past. There is an unsolved murder case that happened around the time I was graduating high school to girls who were my age, and I’d like to explore some of those elements that have stayed with me.

Q: As a debut author, do you have any advice for budding writers aspiring to publish their first novel?

A: This is probably the advice I didn’t want to hear, but it’s held true: just keep writing. No path is smooth or certain, but if you focus on your writing, you’ll be happier for it. Also, as much as you can, connect with other writers and readers. From Twitter to Instagram to in-person events, readings, and conferences, book people are the best people, and the more support you can gather and give, the happier you’ll be.

Q: We have to ask—what are you working on next? Anything you can tease for readers who are already anticipating your next book?

A: Little Voices was my opportunity to put my complex feelings about motherhood into a thriller. For my next book, there will be a few familiar faces, but it’s a completely different story with a new main character who is very different than Devon. I’m exploring addiction, privilege, and what we really pass along generation to generation. It’s also set in my neighborhood of Providence.