James Lyon … with ‘Kiss of the Butterfly’

This is another of those unexpected, yet always welcome review requests, from an author who is certainly no stranger to seeing his name in print, however is new and aspiring in the fast moving and wild world of fiction writing.

Although James has yet to succomb to the rigours of maintaining a dedicated website, there is a well supported and active, ‘Kiss of the Butterfly’ facebook page, here. 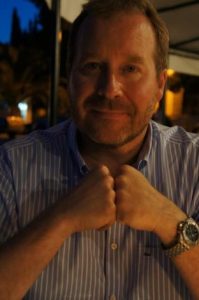 …. an American ex-pat, is an accidental Balkanologist, having spent the better part of 32 years studying and working within the lands of the former Yugoslavia. He has a Ph.D. in Modern Balkan History from UCLA and a B.A. in Russian from BYU and has worked as a historian, editor and political analyst.

He has lived in Germany, Russia, England, Massachusetts, Georgia, Florida, Alabama, Louisiana, Utah, and California, and spent the better part of 18 years living in the lands of the former Yugoslavia, including Bosnia and Herzegovina, Croatia, Montenegro, and Serbia, and has worked in Macedonia and Kosovo. He has travelled widely, from Africa to Latin America to the Middle East, and all over Europe. He currently works in Sarajevo and bounces back and forth to Belgrade.

In his spare time he likes sailing through the Dalmatian islands and eating Sachertorte in Vienna at the old Habsburg Imperial Court’s Confectionary Bakery, Demel. He lost his cat in the forests of Bosnia and can’t find it. If you see a black and white cat that ignores you when you call the name “Cile II”, a reward is being offered…provided the cat hasn’t turned into a vampire.

James  wanted to deal with some of the more difficult issues which accompanied the collapse of the former Yugoslavia, such as ethnic cleansing, fratricide, genocide and the breakdown in society. Although, given his academic background, he has published a great deal in the fields of political science, analysis and history, he has found the articles wanting when getting the reader to engage with some of the greater moral questions on an emotional level, so he turned to telling his story through writing fiction, hoping to use this as a platform to evoke discussion on some of these important issues.

So how did vampires work their way into the storyline?

Well, to keep a reader from dozing off, James realised that you have to have a compelling story to move things along……

‘KISS of the BUTTERFLY’

…. so James combines Dan Brown, Indiana Jones, Bram Stoker, and Umberto Eco, with the vampires serving both as the villains and as a metaphor for the broader issues. The fact that vampires come from Balkan folklore (not Romanian), means he was able to abuse his academic training for a good cause!

This is James’s take on ‘Kiss of the Butterfly’:

“Kiss of the Butterfly” has something for everyone and doesn’t fit into any particular genre: there is romance, adventure, and it is definitely a thriller. Readers will enjoy the fast-paced “Da Vinci Code” style of action and discovery. And there are a few places where it gets just a teensy bit scary, but not Steven King scary.

Along the way you’ll find out about “real” Balkan vampires, their characteristics, and how they differ from the pop culture vampires we see in today’s books and films. You’ll find out the answers to questions such as: what shape and color are a vampire’s eyes?; where does a vampire’s power lie?; where do vampires sleep on Good Friday?; what is the relationship between vampires and butterflies?; and what happens if a vampire bites you?. Spoiler alert – just any old stake won’t kill a vampire.

As this was an author invitation to read and review, a PDF of  ‘Kiss of the Butterfly’, was sent to me free of charge, by its author James Lyon.

James and ‘Kiss Of The Butterfly’ have just been mentioned on ABC News. Click here to read the article in full.