My Thoughts About …. ‘Coffee At Little Angels’ by Nadine Rose Larter

Synopsis From The Author Site 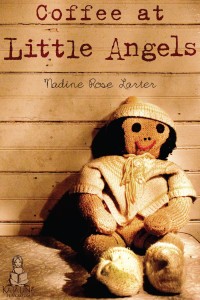 Phillip, Sarah, Kaitlyn, Caleb, Maxine, Grant, Melanie and Josh grew up  in a small town where they spent their high school years together as an inseparable clique. But high school has ended, and they are all living their own “grown up” lives, each under the impression that their group has basically come to an end. When Phillip dies in a hit and run accident, Kaitlyn summons the others to all come back home, forcing a reunion that no one is particularly interested in partaking in.

Coffee at Little Angels follows how each character deals with the death of a childhood friend while at the same time dealing with their own ignored demons after years of separation. Events unfold as the group tries to rekindle the friendship they once shared to honour the memory of a friend they will never see again.

Nadine grew up in the tiny town of Molteno which is nestled between a couple of mountains in the Eastern Cape of South Africa, but she currently lives in the coastal city of Port Elizabeth with her son, her fiance and two step children.

While she knows she should technically get a “real” job, she can’t imagine being happy doing anything but playing with new characters and creating lives for them.

“I always find it unnervingly odd to write about myself. Simply saying “Erm….i’m just…me…”  seems a bit of a cop out so I am going to actually attempt to do myself a bit of justice here.

First of all I come from the best country in the world! South Africa. We have mostly sunny skies, gorgeous beaches, biltong, boerewors, Ouma Rusks, craploads of culture everywhere and Casper De Vries. These are things I cannot live without. My mom’s an American but as much as I love being a bit of a half-breed, South Africa will always be my home and I will love and defend her forever.

All my life I have wanted to be a writer. I’ve always had a bit of a love-affair with words and the obsession has grown drastically over the years. This blog is pretty much a testament to that fact.  I used to write poems and stories all the time as a kid and I plan to continue for a  long time. It’s only recently that I’ve become brazen enough to actually call myself a writer. I’ve always been pretty shy about it. I guess with age comes the bravery we need to actually be true to the things that we love.”

Nadine On ‘Coffee At Little Angels’

I always find it kind of hard to answer when people ask me what Coffee at Little Angels is about. Quite simply it’s about death, but of course it’s a little more complicated than that.

This book is by no means an intricate novel. It is very basic and straightforward in every way. I sat down to write and this is what came out, with no particular forethought or storyline in mind. I think if I have to take a guess at what it is about it probably has a lot to do with how our childhoods shape our lives indefinitely, and how the experiences and relationships we cultivate as children leave an un-erasable footprint on our cores.

If there was a prize for enthusiasm, then Nadine would win hands down. She actively participates in email exchanges, twitter and blog conversations, together with regular updates on her own blog.

‘Coffee At Little Angels’ has obviously been a labour of love for her, which came across from the instant I started reading. It quickly became apparent, that it all comes straight from the heart!

The book is divided, not into chapters, but into short thought passages and conversational interludes, always told in the first person. At first, this was a little disconcerting, as characters were coming, passing on their transient thoughts, then disappearing, to be replaced by someone else. It didn’t take long to get used to the style though and I found that it always kept the content fresh and up to date and I always knew what any individual character was thinking or doing.

The characters are all rich in detail and the entire book has such an easy conversational quality, with real issues being mentioned and talked about without constraint, that you could be eavesdropping on a group at a party, in a bar, or indeed, in a coffee shop.

The first chapter captured me in an emotional stranglehold and I could have listened to Phillip speak for much longer. He is such a shrewd and complex character, who makes some fantastic observational and interesting comments about small town life and mid-life crises, in relation to life and death, about which he is very pragmatic, until it happens to him!!!!

Phillip’s death forces upon the remaining members of the group, a reunion that most of them do not relish and a return to their hometown, that they are not looking forward to.

They do say that weddings and funerals bring out the best and worst in people, and nowhere is this better illustrated, than in the tales that Nadine weaves around this group of disparate people, desperately fighting to leave their small-town images behind them and to prove to their peers that they have succeeded in doing so.

The consequences of the group struggling to find their voices in a much wider society, have meant some startling revelations, when true feelings are eventually revealed.

Some have been able to reveal their ‘true selves’ and are living a full life, that would have remained locked inside them, had they stayed in this narrow minded community full of racial and sexual bigotry. Those individuals however, are reluctant to confide in the rest of the group, almost afraid of the retribution they fear may follow such disclosures

Others have seen the road to success, as needing to acquire possessions and not just the material kind!

Those who have chosen to remain within the confining environs of their small-town upbringing, are perhaps the most troubled and seem to have the most to prove, both to themselves and the others. Letting go of something they have already lost, is not an option and accepting death as the ultimate leveller and a time to confront their demons, is the most difficult of choices.

Theses varying characteristics are so well defined by Nadine, that you can almost read their thoughts and know their next move.

I don’t know where I have heard this saying, but it came to mind and seemed so apt:

The atmosphere at their first meeting, is as expected, awkward and constrained, as each of the former friends have come to the gathering with their own secrets, desires, memories, jealousies and prejudices.

It is like the meeting of strangers, newly introduced at a party, weighing each other up emotionally, but in reality only papering over the cracks from long ago friendships and relationships, which have foundered and broken apart over the intervening years.

Nadine managed to take me right into the psyche of the characters, as the forced reunion brings them to the very brink, before differences are aired, they can collectively admit their failings as individuals and move forwards into a situation which may, or may not, see them reunited in a new more understanding and tolerant bond of friendship.

Overall, this is a very poignant and touching read, which somehow spoke directly to me, and then left me slightly emotionally drained, but glad to have been able to ‘listen in’ on the conversation.

The last page did have me wondering however …. Did she, or didn’t she? …. Accident, or not?

Intrigued? You will have to read it for yourself then, won’t you?

A well deserved 4 out of 5 for this debut novel

This book was a review copy, sent to me by the author, Nadine Rose Larter and as such, was free of charge.

‘Coffee At Little Angels’, is a self-published book, which can be purchased by clicking here.

“I chose to self publish simply because it feels like taking my future into my own hands and running with it. There are no excuses when it is just you. The self-accountability can be thrilling sometimes. Being ready and then actually being able to move forward instead of waiting to hear from publishers has been a special kind of blessing. I am not closed to the idea of having a publisher, I am just ready to go on without one for now.”