The Summoner
by Layton Green
Review

This book was sent to me, for review, by talented new author Layton Green, to introduce his  character ‘Dominic Grey’, in this, his first of a planned series of globe-trotting adventures, investigating the world’s most bizarre and dangerous cults. 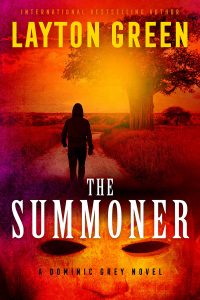 A United States diplomat disappears in front of hundreds of onlookers while attending a religious ceremony in the bushveld of Zimbabwe.

Dominic Grey, Diplomatic Security special agent, product of a violent childhood and a worn passport, is assigned to investigate.

Aiding the investigation is Professor Viktor Radek, religious phenomenologist and expert on cults, and Nya Mashumba, the local government liaison.

What Grey uncovers is a terrifying cult older than Western civilization, the harsh underbelly of a country in despair, a priest seemingly able to perform impossibilities, and the identity of the newest target.

He is the author of the Genesis Trilogy, the Dominic Grey series, the Blackwood Saga, the Preach Everson novels, and other works of fiction.

His novels have been optioned for film, nominated for numerous awards (including a rare three-time finalist for an International Thriller Writers award), translated into multiple languages, and have topped dozens of bestseller lists. Layton is also the former co-creator and editor of International Thrills, an online column that interviewed crime authors from around the world.

In addition to writing, Layton attended law school in New Orleans and was a practicing attorney for the better part of a decade. He has also been an intern for the United Nations, an ESL teacher in Central America, a bartender in London, a seller of cheap knives on the streets of Brixton, a door to door phone book deliverer in Florida, and the list goes downhill from there.

The only thing Dominic Grey knew for certain about the disappearance of  William Addison was that it was the strangest case to which he had ever been assigned. The facts were few. Three nights ago, Addison, retired head of Consular Affairs at the United States Embassy in Zimbabwe, attended a religious ceremony on the outskirts of Harare. What religion the ceremony belonged to remained unclear. Harris Powell, Deputy Director of Diplomatic Security and the man now walking beside Grey, had described it as “one of those African ones.”

According to Addison’s girlfriend, a Zimbabwean nurse thirty years his junior, Addison was drawn into the center of a ring of worshippers. The girlfriend didn’t know what happened inside the circle. She tried to follow, but couldn’t press through the crowd. What she did know is that he never came out…

“Turn on all your lights and lock all your doors!”

It really is difficult to believe that this is Layton Green’s first foray into the world of thriller writing. In Layton, we have an amazing new talent, together with a strong and instantly established new character, in Dominic Grey.

I should say straight away, that this is not a book for the faint-hearted, or those of you with a weak stomach.

I suspect there has been great thought about Dominic and his path for future adventures, before Layton has taken pen to paper, with the result being a character that has great depth and strength of character, right from the opening page.

We get to know about Dominic’s own troubled past almost immediately, which straightaway forms a bond between him and the reader. From his violent and abusive childhood; his struggle to strengthen himself in mind and body, so that ‘The Sins Of The Father Shall Not Be Visited Upon The Son’; and his continuous, ongoing battle to maintain that equilibrium and balance in his life. His ethos and beliefs are that he can control his demons and use their power to help people, he operates only on facts and keeps a clear set of morals.

All these emotions and reactions are laid bare by Layton, so that the reader can almost get inside Dominic’s mind, as he plots his next move.

Layton seems to have built a central core of two other characters, during the course of this story, who I think Dominic will ultimately take with him, on his future adventures:

Nya is the perfect foil for Dominic’s fragile volatility. Calm and dispassionate in her work, whilst all too aware of the plight of many of her fellow Zimbabweans. She is trying desperately to hold on to her strong Christian faith, instilled in her by her father, but is constantly being tested as to it’s validity and worth.

Victor is still, even at the end of the book, quite a strong, complex character who hasn’t yet been fully exposed as a recognisable force in his own right, although as Dominic’s new employer, his personality should begin to unfold with time.

Layton has managed to strike a good balance between being informative about a country, with it’s obvious inherent political and social problems, without bombarding the reader with a ‘Party Political Broadcast’ about the situation.

Through his fantastic use of the English Language, he eloquently portrays vivid images of the beauty of this troubled country; its sights, sounds and smells coming alive in their descriptions. You can almost ‘feel the landscape’.

The macabre, graphic and often troubling plot, evoked some very disturbing thoughts and managed to convey the palpable and obvious fear, suspicion, hatred and superstition, which is all too evident in modern Zimbabwean society.

The way that a people, in such obvious turmoil and looking for something tangible to cling on to, can be whipped up into a frenzy of ‘religious’ fervour, is expertly crafted into the plot by Layton, making the book a true experience of human vulnerability.

The plot had many twists and turns along the way and several times I felt that I had cracked the secret of N’anga, only to be thwarted as the next chapter unfolded. In the end, the secret identity was a complete surprise and was a well thought out storyline, that few would have guessed at.

Some reviews have pronounced this book to be too ‘wordy’ and have slated Layton for using words whose meanings have to be looked up. Whilst the latter comment may have been the case for me a couple of times, it only made me think about the writing more and concentrate on the content more intently. It is good to see the English Language being used to its full potential, without the slang and text speak, which has invaded our communication chain recently!! It was great to have actually needed to READ a book.

Layton Green is definitely a new force to be reckoned with in the genre of thriller writing, an author of the highest calibre.

The fact that this book was read and reviewed by myself, at the request of the author, did not influence my rating or comments in any way. In case you haven’t worked it out yet – I Love This Book !!!!

Bring on more Dominic Grey as soon as possible please !!