The latest addition to the Fiction Books virtual shelf this week, is another of my ‘must have’ options, from the lovely folks over at NetGalley. I am really becoming quite strict with myself and only accepting free books from my preferred genres, any books which I choose outside of those genres, are now only as a the result of a direct review request from either author or publisher. 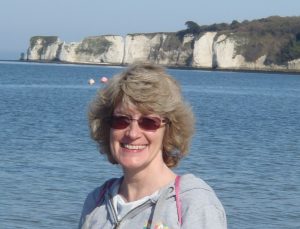 Perhaps writing is in Jane Cable’s blood. Her father, Mercer Simpson, was a poet; her cousin, Roger Hubank, a novelist; Roger’s uncle, John Hampson was also a novelist and fringe member of the Bloomsbury Group. And it’s even rumoured that John Keats is somewhere back there in the family tree.

It is therefore no wonder that she has always scribbled. But it took her until she was in her forties to complete a full length manuscript. And then another, and another… Writing stories became a compulsive hobby. She could lose herself in her characters, almost live their lives, and she started to long for readers other than her mother and a few close friends to be able to do the same.

Jane has a degree in Communication Studies and worked in PR in her twenties, although her career now is nothing to do with writing. When she was almost thirty she retrained as a Chartered Accountant, meeting her husband in the process, and for the last 13 years she has run her own business. Apart from being very rewarding, most of the time it means she can squeeze a few hours into every day to write.

It was reaching the final of The Alan Titchmarsh Show’s People’s Novelist competition in 2011 which made Jane take her writing seriously. She was signed by a big name agent straight away but after a while realised he wanted ‘The Cheesemaker’s House’ turned into a thriller, so they parted company. Another agent was seriously interested but wanted the book re-written as a pure romance – and that was something she wasn’t prepared to do. Slowly she realised that however good her book was, unless it fitted neatly into a genre, it was never going to be taken up by a mainstream publisher. Jane went to a self publishing conference organised by the Writers & Artists Yearbook and was inspired by the speakers to publish independently herself. It seemed the only way for the book she had written to reach a wider public.

As well as her own comprehensive and well presented website, Jane also has a dedicated Facebook page for ‘The Cheesemaker’s House’, where she is always ready to chat about the book, so why not stop by and say Hi!

I am hoping that Jane will also be stopping by in person very soon, to publish a ‘Guest Post’ over at ‘Meet The Authors’ pages, I am really looking forward to that.