Mailbox Monday now has a permanent home, where links may be added each week. So why not stop by, leave a link to your own Mailbox Monday post, oh! and don’t forget to leave a comment for our three new joint administrators, after all, we all like to receive them … www.mailboxmonday.wordpress.com

My book this week is an author review request received direct from Alan Jones, a pseudonym for its otherwise anonymous, first time author.

As the book’s synopsis alone didn’t make for a particularly informative or interesting post, Alan agreed to write what transpires to be, a most interesting guest post, in lieu of an official biography.

Check out the unique and novel way in which Alan’s co-conspirators helped him to launch ‘The Cabinetmaker’ … you couldn’t have dreamt this one up!

As you have obviously worked out, I am writing under a pen name as I have a client base in my ‘real job’, some of whom might take issue with the content of the book. It’s very frustrating that I can’t tell anyone in my home town, and it’s probably losing me a lot of potential sales and exposure, but I have other people in the organisation to think of. Although I did a lot of the preparatory work for the street cabinetmaking launch and handed out flyers/talked to punters, it was all off-camera. The street cabinetmakers are all friends of mine who kindly offered their help in exchange for a curry and more than a few beers! We all really enjoyed ourselves, but I was itching to join in! We are intending to repeat it if the book ever does well enough to be published in print. If the book takes off and I can write full time, I would then be able to ‘come out of the closet’.

A young detective’s first case ends with a miscarriage of justice that haunts him, even when the freed killers’ lives begin a spiral to hell.

Set in Glasgow from the late nineteen-seventies through to the current day, ‘The Cabinetmaker’ is an unusual crime novel, telling the story of one man’s response to his son’s murder, and his personal fight to see justice carried out when the law failed him.

In 1978, young Glasgow policeman John McDaid’s first day in CID sees him in the thick of a murder investigation. A gang of young thugs has brutally murdered Patrick, the only son of local cabinetmaker, Francis Hare.

John and Francis become unlikely friends, united by a desire to bring Patrick’s killers to justice, by a love of playing football, and by Francis’ introduction of the young detective to a lifelong passion for woodworking and fine furniture.

This is the story of their relationship, the Cabinetmaker’s quest for justice, and the detective’s search for the truth. 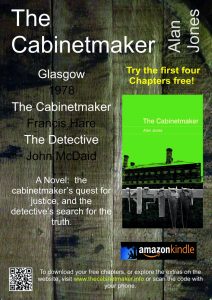 I’d been trying out a number of plots for books for a number of years, and even started a few, until the plot for The Cabinetmaker gradually gelled, and I felt I had a story good enough to write. I’ve been an amateur furniture maker for a long time, and have always enjoyed playing football, so it was easy to use these as the main themes for the book, and I lived in Glasgow for the first twenty or so years of my life, so location was an easy choice.

The premise of The Cabinetmaker, a slightly unusual and sometimes gritty crime novel, is of a local cabinetmaker’s fight for justice for his murdered son when the thugs who killed him walk free, and of his friendship with the book’s narrator, one of the junior detectives on the case. It combines Glasgow gang culture, sloppy policing and amateur football with fine furniture making, bit of a love story and some interesting detective work. The book also contains some strong language, some sleazy police and a smattering of Glasgow slang, so be warned!

I’ve always been an obsessive reader, but sitting down to write wasn’t as straightforward as I’d hoped. I had a number of false starts over the next five years, but eventually it started to get easier, and in the end the book came together quite quickly.

My aim had been to write the book before I reached fifty, and it just scraped in with a few weeks to spare, made easier by the fact that my children were, by then, grown up and good proof readers. My daughter also did the cover.

The first person to read The Cabinetmaker, a friend who was a sergeant with Glasgow Police CID, loved it, and confirmed that I’d captured the feel of the Glasgow police force at that time the story took place very well. He suggested a few alterations and gave me a couple of stories that I added to flesh out the characters. A retired English teacher edited the book for me.

Despite trying a fair number of agents and publishers, I had very little response. One agent said that if I dropped the woodwork and the football, he would be interested, but I just couldn’t do it.

I’d just about given up when a small Scottish publisher asked for the full manuscript. Three days later I had another rejection, but they’d returned my manuscript, extensively edited, and said that, with changes, the book would have a good chance of being published.

Then, another agent said he’d liked it, and had wrestled with the decision, but declined it for various reasons. However, he said that it wouldn’t surprise him if the book did really well on Kindle Direct Publishing. I don’t think I would have self-published if I hadn’t had some qualified approval from publishing professionals.

I had the book formatted professionally by Electric Reads for peace of mind – they were very good, and quite reasonably priced. Surprisingly, I found the whole KDP publishing experience far easier than I’d expected, so the book’s now available on the Kindle store.

I developed a website to promote the book, with stacks of extra content including an audio slang dictionary, a cabinetmaking glossary, an interactive map and four free chapters to download as I felt that readers could get a good feel for the book before buying it by visiting the website, and refer to the slang dictionary or cabinetmaking glossary while reading the book.

We officially launched the book during the Literary Dundee week by staging a performance of Street Cabinetmaking, which went down well and was really good fun. It was covered by STV Dundee reporter Catriona McPhee.

I realised that word of mouth and a few posters on lampposts at the Wigtown Book Festival weren’t going to be enough, although book cafes in Wigtown, Inverness and Glasgow kindly displayed leaflets and posters for me.

I’d  read  an article that said the biggest available aid to increasing awareness was being talked about on book review blogs, so I’m getting in touch with any book blogs where I think The Cabinetmaker might have appeal to its readers.

So far, I’ve had a great response from a hell of a lot of people, and an astonishing amount of friendly and enthusiastic support from book bloggers and one best-selling author, successful Scottish crime author James Oswald, who gave me spades of advice and tweeted that The Cabinetmaker was ‘well worth a look’.

So until a publisher decides that a print version would be a good idea, I’m going to continue my efforts to publicise the eBook in any way I can. In the meantime, I’ve started my next book in between trying to get this one on as many ‘must-read’ lists as I can.

I can’t wait to discover all your own great new finds this week … so please stop by and share your link, so that I can visit your post.