Just one author review request this week, which came via Goodreads …

This debut novel, by new author Rick Brindle, was gifted as a MOBI file for Kindle download ….

Riverside General Hospital, a place of harsh realities.
On Ingram Ward, Staff Nurse John Hunter is a man on the edge. Unable to move on from the recent traumas in his life, pushed to the limit, and liking his job less and less, he makes a drugs error, and questions why he even wants to be a nurse. The incident puts him on a collision course with the hospital’s new matron.
John’s best friend, Australian coronary care nurse, Dave Chiltern, discovers that helping a friend run his pub while he’s unwell can be more rewarding that his current job.
Roxanne Jones, John’s girlfriend and a care assistant on Ingram Ward, is contacted by her former boyfriend, who tries to re-ignite old flames.
Ward Sister Sarah Ashe struggles to focus on her job after leaving her violent husband.
Facing the impossible expectations of front- line NHS care, the nurses who struggle to save lives and preserve their own sanity as they do so, all face choices of their own. Do the angels have an alternative? 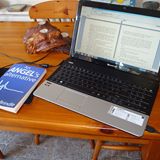 Rick was born in Dorset, England, in 1968, although as his father was in the Army, he was educated and spent many of his childhood years in Germany.

On returning to the UK, Rick did mostly bar work, before in 1989, joining the RAF Regiment for three years, which included a tour of duty in the Gulf.

Rick is an avid writer and is passionate about heavy metal music.

My experiences have informed the content of An Angel’s Alternative. I wanted to convey the issues and themes that many nurses are passionate about, but which many people may not be aware of: sense of powerlessness at work, a real wish to give good care, but frustration at the system that seems to create obstacles, fear of being struck off. A big part of the story, the drug error, is something that terrifies nurses. You find very few who actually admit to having made one, but the chances are, most have. The novel’s title is about another theme, what choices do nurses have, what choices do they face. John is tempted away from the health service and he wonders why he is so reluctant to make that move. Many nurses also think the same, and many seem to carry on simply because it’s the devil they know.

An Angel’s Alternative is the fourth novel I’ve written, but the first that reached standard that I was happy to publish. They say you should write about what you know, and the second novel I wrote was An Angel’s Alternative’s prequel, which I hope to publish at some point. I’m currently working on my next novel for publication. It was the first one I wrote, and is about another passion in my life, heavy metal music

Catch up with Rick:-