I am always pleased to receive review requests from new and aspiring authors and when they simply arrive ‘out of the blue’, it is always a nice surprise, especially when an author is as full of enthusiasm as Ryan Asmussen.

Ryan wrote to introduce himself to me and to offer me the opportunity to read and give my thoughts about his soon to be published book, ‘The Englishman and the Butterfly’.

Although this will be his debut novel, Ryan is already a  more than consummate author and public speaker, and certainly no stranger to having his name in print, in the fields of poetry, journalism and film critique.

His website is professional, comprehensively populated with his many personal and professional achievements and not least, thoroughly engrossing and interesting to read, including sample reading from ‘The Englishman and the Butterfly’, just to whet your appetite. So be sure to stop by and visit Ryan, here. 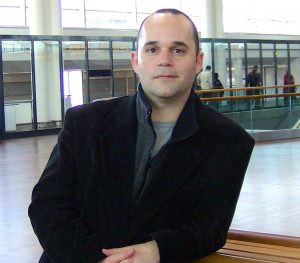 In addition to his writing and teaching, he plays drums, guitar, and piano, sometimes in semi-professional bands, and studies Zen Buddhism. Asmussen earned his Bachelor of Liberal Studies in English & American Literature and Master of Arts in Teaching in English from Boston University.

When asked in a recent interview, what experience he hoped that readers would take away from having read the book, Ryan replied:

‘The Englishman and the Butterfly’ 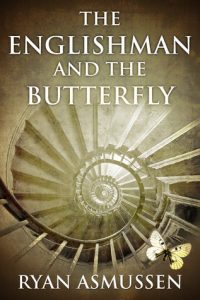 ‘The Englishman and the Butterfly’, has already received glowing advance reviews, ahead of its publication on Ist October 2012, which will be the culmination of several years ‘labour of love’ for its author, followed by a monolithic struggle (Ryan’s own turn of phrase), whilst he agonised over the decision whether or not to self-publish, which is what he has ultimately decided to do.

The decision to self-publish, though it may seem like the harmless choice of an author continually, woefully rejected by agents, is not, in fact, an easy one to make. There is something – and I know you know this – called ‘the writer’s ego’ that stands monolithically between the struggling artist (for that’s what most of us believe, hope, we are, ‘artists,’ though we know for sure we struggle) and a vision of fame and financial stability we can barely make out beyond the peaks of our dogged perseverance.

For me and thousands of other writers like me the path to self-publishing has been paved with stones of anger, perhaps tears, and more than a little bitter self-recrimination. There is a reason it used to be called ‘vanity publishing.’

That is certainly some synopsis, from a work of literary fiction, which is sure to stretch my intellect to its extreme!

I only hope that my amateur blog and review techniques are up to the challenge of this intriguing and alluring storyline.

As this was an author invitation to read and review, a PDF of  ‘The Englishman and the Butterfly’, was sent to me free of charge, by its author Ryan Asmussen.