‘The Accident’ By Dawn Goodwin – (The Blog Tour)

This is the second in the trio of recent blog tours which the lovely folks at Aria Fiction have arranged for me to participate in. Once again I was just a bit too late to the party to get my hands on an author guest post, but the chosen extract below will give you a little taster of just how good this book is going to be. Included is a comprehensive schedule for the tour, so why not check out some of the other blog stops. 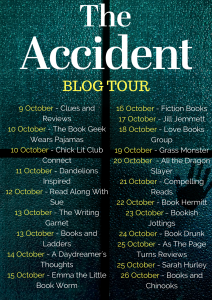 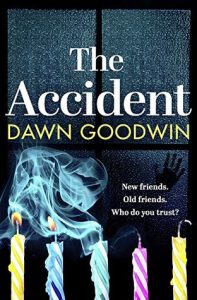 A tragic accident, an unbearable loss and a marriage in crisis – but who can she trust or is she all alone? A gripping, debut psychological thriller that will keep you hooked. Perfect for the fans of Paula Hawkins and S.J. Watson.

Months later, unable to come to terms with her daughter’s death, detached from her husband and alienated from her friends and family, a chance encounter on a rainy street pushes her into an unlikely new friendship.

Scarlet is everything Veronica could’ve been: feisty, adventurous, unpredictable. But as she approaches what would have been Grace’s 10th birthday, it becomes clear to Veronica that the friendship she thought was saving her life could be costing her everything.

Consumed by grief and left questioning her own sanity, is there anyone she can really trust or is someone out to torment her as part of their twisted game? 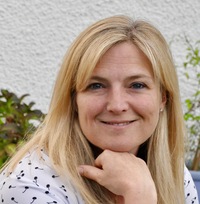 Dawn Goodwin’s twenty-year career has spanned PR, advertising and publishing, both in London and Johannesburg.

Now a company director, what spare time Dawn has is spent chasing good intentions, contemplating how to get away with various crimes and misdemeanours, and immersing herself in fictitious worlds.

The best thing about being a writer is the ability to live vicariously through your own imagination, with no boundaries as to how you behave on paper. And having a good excuse to read as many books as you like in the name of “research”.

One of the most enjoyable parts of being a writer is being able to take the darker side of human nature and explore it to the full, allowing myself to inhabit the mind of a villain and take the driving seat. I certainly wouldn’t think to behave in public the way some of my antagonists do, but it can be fun to imagine what it would be like

Catch up with all the latest news on Dawn’s website

As my contribution to the Blog Tour, Dawn and the lovely Melanie from Aria Fiction, have requested that I share this short extract from the book with you.

As it appears that the text is written in short chapters and from multiple perspectives, and as this particular excerpt isn’t from the book’s opening, I shall still be able to share further posts with you as contributions to the ‘Book Beginnings On Friday’ and ‘Teaser Tuesday’ memes.

A week passed and I saw nothing of Scarlet, but I wore a cloak of shame and self-recriminations for days, paranoid as I was over my drunken behaviour. My fragile ego got a lot of mileage out of it. Tom was hardly around that week. We had eaten in silence that evening in front of the television blaring a news programme full of sadness and destruction, then I had retreated nauseously to bed while he pretended there was more he wanted to watch. Although he had acted as normal the next morning, even stopping to tease me about my hangover while on his way out the door to work, he had a busy week and spent more time than ever at the hospital, which suited me fine as I couldn’t look him in the eye after my embarrassing seduction routine had failed. I felt a wave of queasiness every time I thought about it.

I could feel myself retreating again. My brief brush with friendship had been a welcome change to the norm and I had really enjoyed spending time with Scarlet, someone who couldn’t compare me to who I was before, but she would probably not want anything to do with me after the other day. I can’t remember her being as drunk as me. God knows what she must’ve thought.

Then Friday rolled around with a lack of purpose. I had no idea what I would do with myself, apart from clean away more imaginary dust and lie on the couch watching reality TV stars embarrass themselves in the name of entertainment.

That morning, I got up as usual, dressed for a run and kissed Tom goodbye like a dutiful wife as he headed out. I opened the door, then returned to the kitchen to grab a bottle of water and some headphones. Behind me, I heard Felicity call my name.

I fought the urge to close the door in her face.

‘You going for a run? I’m heading out too – we could go together.’ She was already stretching her arms above her head. The whole idea filled me with dread and made me want to crawl back to bed, especially since our last few meetings had been awkward to say the least.

‘I… er… I promised a friend I would go to the gym with her,’ I answered vaguely.

‘Just someone I met last week. She thinks more exercise would do me good, so I’m going to try a class with her.’

‘She’s right, of course. Didn’t I tell you that? Well, she sounds interesting – we should meet up some time.’

An uncomfortable silence fell between us as Felicity began to stretch her hamstrings in her brightly coloured leggings, never once taking her eyes off me.

‘Right, well, I… er… I better get my stuff together,’ I said, starting to back into the house.

‘Fine, another time then,’ she said, her voice now tense.

I closed the door on her and leant against it with my eyes closed. Pulling off my running shoes, I left them lying in the middle of the carpet before heading into the lounge. The curtains were open and blades of sunlight carved up the walls, but all I focused on was the soft couch, the comfortable-looking cushions and the beige quietness of the room. I lay down with my face in a cushion, steadying my breathing and shutting the world out.

Minutes passed, but I lay where I was, not moving, struggling to pull in breaths through the fabric of the cushion, but perversely enjoying the suffocation.

All at once, I had the overwhelming feeling that someone was in the room with me. My skin prickled as though eyes were tiptoeing over my skin. It took me a minute to react, scared of who I would see, but close behind the fear was hope that I would see her.

I slowly lifted my head and looked towards the lounge doorway, but it was empty, the room quiet, the air unmoved. I wanted to weep at the flood of disappointment that washed over me and I went to bury my face again, but heard a subtle noise in the hallway, the scuff of a door or a shoe perhaps.

This time it was pure fear that prickled through me. Was there someone in the house? Had I closed the front door properly behind me? Was the back door locked?

I lay still and quiet, my ears reaching above the sound of my pulse. But there was nothing to hear. The feeling of being watched dissipated, replaced by doubt at whether I had heard anything at all.