THE AUDACITY OF SARA GRAYSON 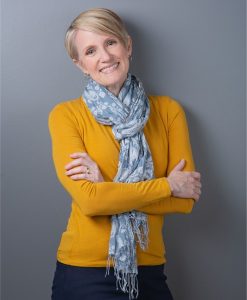 Joani has taught middle school English (a little like playing Wac-a-Mole) and writing at Brigham Young University and the University of Maryland.

She grew up with six sisters and two brothers so she can easily apply her make-up using the toaster as a mirror.

Joani and her husband are the parents of two amazing daughters.

They live in Utah by the mountains, next to a lake and a river.

Joani is very good at cartwheels, imitating Disney Princesses, and making soup. She loves smelling new books before reading them, biking walking and running outdoors, and travelling to beautiful places of quiet reflection especially those with water views.

“I love studying the craft of writing, and I’m fascinated by the processes different writers use to produce writing that inspires me”

“She refused to be triggered by breakfast food, so she went straight for the waffles. Real Belgian ones made of yeast dough – not batter. She’d eaten two of them already. Hot, bronzed waffles with Nutella and strawberries and vanilla bean ice cream. There were times to avoid your triggers and times to chew them up slowly and deliberately. Plus, eating was preferable to small talk, not that anyone would want to talk to her. They were here for Ellery, and Ellery was everywhere”

“She used her milk of magnesia voice. It was smooth and instantly comforting – if you could stand the taste”

He looked back at Sara, his head tilted slightly. ‘Don’t underestimate the power of your roots.’ She sighed. ‘Even when it hurts?’ He met her gaze. ‘Especially when it hurts.’

“Writing is an incredibly vulnerable act”

I would never have thought it possible that I would be awarding a book from the genre of Contemporary Women’s Fiction 5 out of 5 stars, let alone adding it to my Goodreads ‘Favourites’ list! But how could I not, when I became so invested in both the storyline and characters, that I simply didn’t want for it to be over, so that I would have to stop reading!

As a debut book by a new author, Joani Elliott writes with complete confidence, consummate ease and total authority, as I was led by the hand in exactly the direction she needed me to travel, whilst she  stimulated all the myriad of emotions she wanted me to feel along the way.

There were so many more great snippets and words I wanted to share from the story, however some of them might have given away too many hints of ‘spoilers’, and to be honest, I was too busy reading, that I simply forgot to pause and take stock. Besides which, the writing was just so good, that I wouldn’t have known where to stop with the featured lines!

Those opening lines and quirky cover art, lured me into a book, equally strong in both storyline and characterisations, which hit the ground running, and then never let up on the pace until that last word of the final page really did mean it was all over and I could breathe again. The well signposted chapters were short and punchy, which was a real antidote to counteract some of the very muddled and confused thinking of our troubled lead protagonist, Sara Grayson, and kept everything moving along fluidly and seamlessly. The chapters also each began with a quote from many different well-known authors, carefully chosen to invoke a real feeling of time and place, thus setting the scene for what was to follow and all adding to the richness of the assured, observational and descriptive narrative, together with some excellent conversational dialogue.

A well structured, multi-genre, multi-layered story, beautifully textured, written with desperate intensity, yet with genuine heart and balanced with some real moments of laugh-out-loud humour. I followed Sara as she strived to unravel and make sense of, the complicated life her family had led, unbeknownst to her, and the blind and binding faith placed firmly and squarely on her shoulders by her deceased mother, to complete the final book of her unfinished series, with the instruction to be audacious!

Part love story, part mystery, part self-actualization, this is a story to indulge in and escape into, although I was never totally at ease, as I really felt for Sara throughout her challenging and often agonising journey of self-doubt and low esteem, knowing from personal experience, exactly how she was feeling. The realization that much of what she had assumed about her family history hadn’t quite been as black and white as she had thought, opened the floodgates of emotion, as lies followed half-truths; fiercely guarded secrets led to self-doubt and jealous accusations; complex family dynamics caused uncontrollable angst and trauma. Ultimately however, these experiences, shared with people she both loved and respected, opened heart and mind, thankfully resulting in Sara becoming the self-assured person and intuitive writer her mother had always known was buried deep within her.

An authentic cast of wonderfully defined and drawn characters, joined Sara on her journey of self-discovery and filled the pages with some larger than life actions, amusing anecdotes and complex dynamics. I found myself relating to each and every one of them, despite, or maybe because of, their many raw and passionate vulnerabilities, which only added to their genuine and believable interactions.

If you enjoy books about books, bookish people, authors, the writing process, and the publishing world, then you are sure to enjoy this one as much as I did. It almost made me feel that I wanted and more importantly, was skilled enough, to write a book of my own – Okay, only for a few moments, but that’s alright by me 🙂

A complimentary kindle download of this book, for review purposes, was made available by the publicist Meryl Moss Media Group, publisher Post Hill Press, and supplied by NetGalley.