Doug Richardson, is already a well respected and eminent voice in the world of novel authorship, script writing for cinema and film production.

Fiction Books has been fortunate enough to be contacted by Doug, who offers the chance for me to read and pass on my thoughts, about his latest thriller ‘The Safety Expert’, which will be available from December 7th 2011.

Synopsis and cover image courtesy of the author 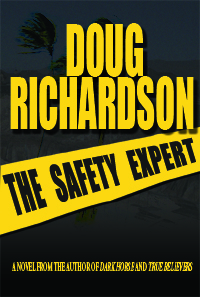 The shadowy world of the thriller is one of my most favourite genres, so I am doubly pleased to have the opportunity to read this book, whose plot reads like the stuff nightmares are made of and seemingly has more twists and turns than a snake in the grass.

Doug was born, raised and still lives in the State of California USA, attending ‘the University of Southern California’s School of Cinema’ to complete his education towards his chosen profession of movie director, although he wisely revised this course of action, turning instead to screenplay writing and since then he has never looked back.

His resume reads like a list from ‘who’s who’, with his feature films including ‘Die Harder‘, ‘Bad Boys‘ and ‘Hostage‘ and his two previous novels ‘Dark Horse’ and ‘True Believers’, which have both received nothing but 5 star reviews.

Crusading Texas lawyer Mitchell Dutton is running for the U.S. Congress – and is a virtual shoo-in come November.  But his opponent has different plans.

The opposition nominee, Shakespeare “Shakes” McCann, is an almost total unknown – a dark horse candidate with no past and no principles who has come out of nowhere to challenge Mitch Dutton.  There is no weakness McCann will not exploit, no secret he cannot expose.  He will lie to reporters and newscasters, alter photographs and circulate fraudulent documents.  If all else fails, he will resort to violence.  And no one is safe – not Dutton’s friends, his colleagues, his beautiful, vulnerable wife…not even the leaders of McCann’s own party.  There is nothing the dark horse won’t do to get elected.

Now front-runner Dutton is running scared.  Because Shakespeare McCann would kill to be congressman…

The child the Sullivans have long prayed for will soon be theirs, thanks to a special procedure performed at a confidential Dallas clinic.

But the miracle of a small life growing within Gwen Sullivan has placed her husband’s destiny and her own in the murderous hands of a dark messiah.

A politician on the verge of greatness and the woman he cherishes have suddenly become the pawns in a conspiracy of staggering proportions, masterminded by a condemned psychopath who plans for his last act on earth to be the total enslavement and destruction of a powerful American family.

As this was an author invitation to read and review, a copy of ‘The Safety Expert’ was sent to me free of charge.