It looks as though Vicky from Aria Fiction has had her work cut out, organizing this mega Blog Tour, with no shortage of takers keen to host a spot for the lovely Lesley Thomson.

As so many of you will know, I generally prefer to share Guest Posts when it comes to my spot on a tour, however Lesley has been so generous in speaking to me in the past, that this time around, I shall be featuring a requested extract and as I write, just trying to remember whether I was ever this sassy and confident as a child!

I hope that you enjoy and my thanks, as always, also goes out to NetGalley for the download. 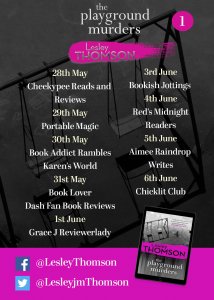 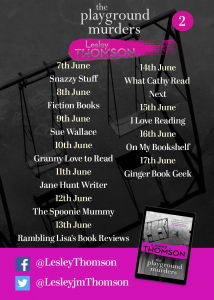 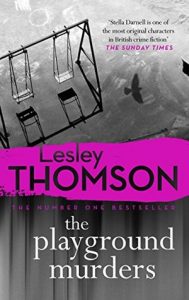 Forty years ago, in the dark of the playground, two children’s lives were changed for ever.

Stella Darnell is a cleaner. But when she isn’t tackling dust and dirt and restoring order to chaos, Stella solves murders.

Her latest case concerns a man convicted of killing his mistress. his daughter thinks he’s innocent, and needs Stella to prove it.

As Stella sifts through piles of evidence and interview suspects, she discovers a link between the recent murder and a famous case from forty years ago: the shocking death of six-year-old Sarah Ferris, killed in the shadows of an empty playground.

Stella knows that dredging up the past can be dangerous. But as she pieces together the tragedy of what happened to Sarah, she is drawn into a story of jealousy, betrayal and the end of innocence.

A story that has not yet reached its end…

Lesley was born in 1958 and brought up in Hammersmith, West London.

She graduated from Brighton University in 1981 and moved to Sydney, Australia the year after, where in between writing her first attempt at a novel, she sold newspapers in a shop at Wynyard underground station in the heart of the city. Returning to London, Lesley did several jobs to support writing, including working for one of the first Internet companies in the UK.

She completed an MA in English Literature at Sussex University and she is now a guest tutor on the Creative writing and Publishing MA at West Dean, where she also runs a crime-writing short course, leads workshops and takes master classes on writing crime novels.

Lesley currently divides her time between East Sussex and Gloucestershire, living with her partner and a raggedy poodle both of whom are treated to blow by blow accounts of scenes and twists in a plot at any given time.

In fact, she doesn’t know how they sleep at night!

‘Yeah completely. Look, there’s blood.’ Danielle crouched beside the body. She levered the jaws open with a stick and revealed sharp teeth. Crimson liquid pooled around the tongue.

‘It doesn’t hurt.’ Danielle splayed her hand on the body. ‘He’s warm. He died just  before we found him. His neck was squashed with a brick. Like this.’ Danielle did handstand beside the dead body. She flipped onto her feet.

‘How do you know?’ Bile rising in his throat, Lee didn’t want to find out.

‘I’m a detective.’ Danielle dipped the stick inside the cat’s mouth. She smeared blood on the tarmac.

‘It can’t hurt me,’ Danielle reassured them.

Danielle shoved the cat’s body with her stick. Blood trickled from between his lips onto the road. ‘Shall I cut it up so we know how it died?’ Buoyed by this idea, Danielle got over her irritation that Nicola was there. She wished that Inspector Darnell would come. A dead body was no different from being alive. The cat looked the same.

‘You just said it was with a brick,’ Lee said. If Sarah sees it she’ll have nightmares then Alan will kill me.’

‘I still have to do a post-mortem. Like the police did with Robbie. They chopped him up.’ Danielle had forgotten she’d told them about the brick.

‘They did not .’ Nicola put her face in her hands. ‘They wouldn’t do that to Robbie.’

Lee put his arm around Nicky. Leaning into him Nicky said, ‘I think she was run down. Mum says cars go too fast down here. She had a go at your dad the other day, Danni. He was in a sports car. Mum said he stole it.’

‘He didn’t.’ Danielle tipped the cat’s hind leg with her stick. Her own mum had accused Eddie of nicking it for his fancy woman. ‘He took me out. It’s an MG.’

‘Wow,’ Lee breathed. ‘Policemen go faster than my dad. In a panda car with a siren.’

Danielle scanned Braybrook Street for Inspector Darnell. She’d sent a note to the police station asking him to meet her there. ‘Nee nah, nee nah!’ Chasing about in circles, Jason was a panda car. As the light failed the black cat merged with the black tarmac. Danielle told Lee, ‘We have to move it out of the way of cars.’

‘Don’t! It’s got germs!’ Nicola tugged Lee’s arm. ‘We should go. Else we’ll get the blame.’ Lee dug in his pocket for his lighter. He flicked it on and held it up. ‘We should call the police,’ Nicky said. ‘If it was with a brick, that’s murder. A brick wouldn’t move by itself.’ ‘I’m the police.’

Danielle hadn’t considered this complication. ‘It could have been a car. That’s why I’m going to do the post-mortem.’ The dancing flame lent an infernal aspect to the scene, the children’s faces made demonic.

‘What’s that?’ Kevin Hood was racing Sarah Ferris along Braybrook Street. As they reached the cat, the lamp-posts went on. ‘Nothing, babes!’ Lee stepped in front of the cat. ‘Show me.’ Alan Ferris’s daughter was more than capable of seeing blood without flinching. Sarah gazed at the dead animal. The little girl, eyes wide with curiosity, could have no inkling that very soon her own oesophagus would be compressed by a house brick until she could no longer breathe.

Danielle grabbed the cat’s tail and dragged it into the gutter. The group considered the furry mass. The cat was large with a collapsed tummy. ‘I think it’s old,’ Sarah decided. ‘Is it dead like Robbie’s dead?’ ‘Yes,’ Nicola snapped at her.

Written by Yvonne
4 comments
“Another duo to keep me awake at night!”
Mailbox Monday
FacebookTwitter
“She Should Never Have Gone Back Home”
‘Silent Night’
by Geraldine Hogan
Cover Reveal