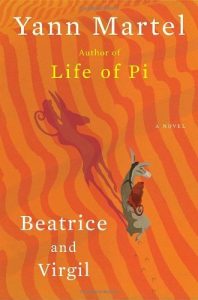 When a letter from an elderly taxidermist drops onto Henry’s doormat it poses a puzzle that he cannot resist.

As he is pulled closer to the world of this strange and calculating man, Henry becomes increasingly involved with the lives of a donkey and a howler monkey – named Beatrice and Virgil – and the epic journey they undertake together.

With all the charm and spirit that brought over seven million readers worldwide to Life of Pi, this novel takes the reader on a tremendous imaginative odyssey.

On the way Martel asks profound questions about the nature of human cruelty, kindness and the liberating power of stories. 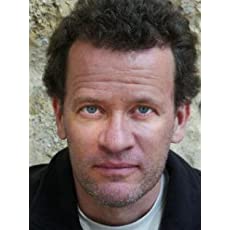 Yann Martel was born in Salamanca, Spain, in 1963, of Canadian parents who were completing graduate studies.  Later they both joined the Canadian foreign service and Yann grew up in Costa Rica, France, Spain and Mexico, in addition to Canada.

He continued to travel widely as an adult, spending time in Iran, Turkey and India, but is now based mainly in Montreal. He obtained a degree in Philosophy from Trent University in Ontario, then worked variously as a tree planter, dishwasher and security guard before taking up writing full-time from the age of 27.

His first book, a collection of short stories titled The Facts Behind the Helsinki Roccamatios, was first published in 1993.  The stories deal with themes such as illness, storytelling and the history of the twentieth century; music, war and the anguish of youth; how we die; and grief, loss and the reasons we are attached to material objects.

In 2002 he won the Man Booker Prize for Fiction for his second novel, Life of Pi (2002), an epic survival story with an overarching religious theme. Life of Pi has been published in over forty countries and in thirty languages.

He is also the author of We Ate the Children Last (2004) and Beatrice and Virgil (2010) and The High Mountains of Portugal (2016). He lives in Montreal where he divides his time between yoga, writing and volunteering in a palliative care unit.