Next up in my marathon February of Blog Tours on behalf of Aria Fiction, is probably the one book of this eclectic selection which I am most excited about. I have read a couple of Carys Jones’s previous thrillers and she has been kind enough to visit several times to add her own flavour to my posts, by way of some lovely unique guest articles.

This time however, for personal reasons, which include the happy addition of a new member to the family, Carys has asked me instead, to share an excerpt from ‘Best Friends’ and promises to visit when the next book hits the press – Congratulations Carys 🙂 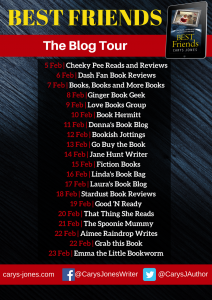 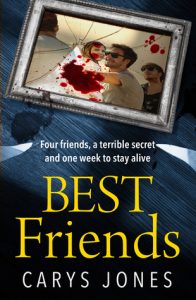 Four friends, a terrible secret, and one week to stay alive…

Grace doesn’t have a family. That was taken away one dreadful day when she was just six, and her twin brother Peter was killed. Instead she has her best friends and flatmates – Jasper, Franklin and Aaron – and nothing can tear them apart.

Living in London, and trying desperately to make a living, the four friends are rapidly running out of money and hope. So, when they find a discarded suitcase in a skip, they can’t believe their eyes when its contents seem to answer all their prayers.

But then there is a knock on their door, and a very disgruntled thug with revenge on his mind, gives them one week to return his belongings, or they will pay with their lives. Soon the fractures in their friendships begin to show, and when one of them ends up fighting for his life, the stakes are raised even higher.

Will any of them get to the end of the week alive, or will the best of friends become the deadliest of enemies… 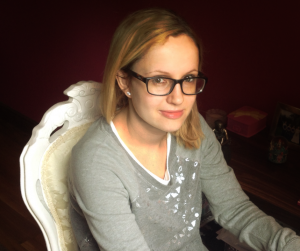 Carys hails from Shropshire, England, where she lives with her husband, two guinea pigs and her adored canine companion, Rollo.

Now plus one! – Congratulations Carys 🙂

John Green, Jodi Picoult and Virginia Andrews are among her favourite authors and when she is not writing, she likes to indulge her inner geek by watching science- fiction films or playing video games.

Although just maybe catching up on some sleep might figure more prominantly right now!

Chosen by Aria Fiction and Carys Jones, this short extract, which are also the opening lines of the book, is my shared feature for the Blog Tour.

It rained the day Peter was buried. Not a gentle, soft rain but a fierce lashing which soaked the grass of the cemetery and coated ebony headstones in a glossy sheen.

Grace did not trust the water. Nor did she trust the stranger standing at her side who kept her leather gloved hand around the little girl’s upper arm in a vice like grip. They expected Grace to run. But where could she go? She longed to climb into the wooden box that contained her brother, to lie beside him and join him in his eternal slumber. Was he still cold to the touch as he had been when the police arrived, bursting through the door and prying the dead boy from his distraught mother’s arms?

Those cries. They still lingered in Grace’s memory along with the screams. An endless echo forever bouncing off the inner walls of her skull.

A crow landed in a nearby tree and then hopped along the lean branches as though trying to garner a better view of the grim scene below. Grace watched the bird, watched how the rain washed over its black feathers. Twice the crow vigorously shook itself and then it opened its dark beak to speak.

“Ashes to ashes,” lamented the priest. Mrs Darden from flat fifteen was holding a large umbrella over him, shielding them both from the icy penetration of the rain.

Christmas was close. In less than a week children would be waking up from a restless night spent waiting on magic, running down the stairs of their homes to see what delights waited beneath a glittering tree.

There were no stairs in Grace’s home. Not unless you counted the general staircase which ran up through the block of flats like a spine.

The call of the crow was shrill. Its rough squawk carried over the whisper of the rain and the words of the priest. Grace continued to look up at its black feathers, listening to the rasp of its cry.

“Come now, focus,” the owner of the gloved hand instructed tersely. “This is your last chance to say goodbye to your brother.”

Peter–forever small and pale with hair as jet black as the crow’s plumage, just like Grace’s. She always saw so much of herself in him. They had the same slight bone structure, the same hazel eyes and soft smiles.

“Adorable,” strangers would stop to stare at the twins in the supermarket, tilting their heads as they issued the obligatory ‘oohs’ and ‘ahhs.’

Would anyone stop now that Grace was alone? The abandoned half of a pair.

“Focus,” the voice beside her demanded. Grace imagined that they were gritting their teeth and narrowing their eyes but she wouldn’t look up to confirm it. She kept staring fixedly at the crow, at its beady black eyes. It kept calling out, the haunting sound carrying over the crowd gathered at the grave side. Grace looked at the crow and she knew; it was death. And when she left the cemetery that rainy December day it would follow her, follow her home, follow her through life because she had seen death, looked it square in the eye and now it was never going to let her go….

Huge thanks to you awesome readers. Maybe this is the first book of mine you’ve read or perhaps you’ve been with me on my writing journey for some time, either way, thank you so much. For me there is no greater feeling than knowing that my books are being read and enjoyed. I hope that you’ll stay with me as I continue writing.