Guest Post By Carolyn J. Rose, Author Of … ‘No Substitute For Money’

Today, to coincide with the release of her latest book in the Barbara Reed series, ‘No Substitute For Money’, I am passing over the ‘Meet The Authors’ page, here at Fiction Books, to author Carolyn J. Rose, who publishes her guest blog.

If you read and enjoy this post, are intrigued by the premise of ‘No Substitute For Money’ and would like the opportunity to win an e-copy of the book, courtesy of Carolyn, simply leave your comment together with a link to your contact page, so that Carolyn can let the lucky winner know. Closing date for entries is Midnight on Friday 31st May 2013.

Oh! … as this is an e-copy, there are no geographic boundaries, so everyone can enter!!

I did give Carolyn the brief that she could talk about anything she wanted, not even thinking that she would choose …

Even the modest formatting of this post has caused me to shudder and cringe, bringing back as it did, memories of my own recent encounter with one of the slippery critters!

Over to you Carolyn …

TOSS A SNAKE INTO THE STORY.  SEE WHAT YOUR CHARACTERS DO.

I have also penned a young-adult fantasy, ‘Drum Warrior’, with my husband, Mike Nettleton ( the second protagonist of the Deadly Duo Mysteries team), as well as several mysteries now out of print, but soon to be re-released.

I grew up in New York’s Catskill Mountains, graduated from the University of Arizona, logged two years in Arkansas with Volunteers in Service to America, and spent 25 years as a television news researcher, writer, producer, and assignment editor in Arkansas, New Mexico, Oregon, and Washington.

I founded the Vancouver Writers’ Mixers and I am an active supporter of my local bookstore, Cover to Cover. My interests are reading, gardening, and not cooking.

I don’t mind seeing a snake at a distance—four yards being about right—but I wouldn’t want to find one in my shower stall or silverware drawer or under the hood of my car. (Yvonne, you’re now on the spot to tell us about that in the comment space.)

Neither would I want one as a companion. I can’t imagine petting a snake, cuddling with a snake, attempting to teach a snake to fetch or roll over.

Nor would I want to chase one down with the intention of grilling and eating it as my uncles used to do with rattlesnakes on the ledges of the Catskill Mountains.

Still, snakes are fascinating. And they’re useful for changing the course of a story.

I wrote up-close confrontations with poisonous snakes into Hemlock Lake and A Place of Forgetting. Through Dan Stone and Liz Roark, I explored my own fears and preconceptions and considered what I might do in similar situations.

Neither character could avoid the fangs and venom. Dan is struck in an attempt to escape a rattler hidden in his car by a killer. Liz gets bit as she slogs through a flooded field to save a toddler from a cottonmouth (water moccasin).

(Clicking on the book images will take you directly to their respective Amazon pages, where you can check out the synopses.)

I’m not sure I would have the courage to make myself a target as Liz did. Normally, when I see a snake I freeze. Then I go the other way.

It was 1980 and I was sweating through a scorching summer in Little Rock, Arkansas, when two friends invited me to hike with them to Twin Falls in the Ozark National Forest. It would be cooler up in the hills, they said, and the map indicated it was only a short hike, just a couple of miles.

(Note to self: Remember that the map is not the terrain.)

Laden with food and gear for an overnight stay, we set out along a trail that paralleled a stream. Within moments we encountered our first snake. It was a rattler, stretched across the trail, aware of us, but too sluggish with the heat to coil or raise its head.

My gut clenched and my heart pounded as we left the trail, picked our way across a rocky slope and around patches of poison ivy, and returned to the path well past the snake.

Fifty yards later we saw a copperhead. It was huge but listless. One of my friends tossed a rock that landed beside it. The snake slid off toward the creek.

Heat and humidity slowed our pace to a faltering stumble. Poison ivy crowded close along the trail. Hoping to avoid a rash and cool off, we bushwhacked down to the creek—and found it crawling with snakes. The drought had driven them to water.

I lost track of the number we spotted slipping under rocks or undulating through shallow pools or stretched out on logs. My gut ceased to knot up. My heart kept up a slow and steady pace. Toward the end of the trek, tired of trudging around snakes and poison ivy, I leaped over a dozing rattler. 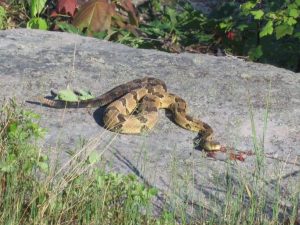 Would I make the same choice now?

For one thing, I’m thirty years older and a lot less likely to leap far enough—if I can leap at all. For another, thanks to the reading I did for those books, I know more about snake venom than I did then.

And, although I never say “never,” I think I’ve written enough snakes into my plots. Protagonist Barbara Reed won’t encounter any in my latest book, No Substitute for Money. She will come across a few snakes in the grass—computer hackers, drug dealers, and a condo manager out to mess up her boyfriend’s plans to move in.

‘NO SUBSTITUTE FOR MONEY’

Substitute teacher Barbara Reed knows better than to say the word “perfect.” Using the P-word is a sure way to jinx romance, finance, and circumstance.

Despite a chronic shortage of funds, things are looking up for Barb after the events of NO SUBSTITUTE FOR MURDER. She’s completing grad school and hoping for a job at Captain Meriwether High School in Reckless River, Washington. Her drug-cop boyfriend, Dave Martin, wants to move in and his daughter is all in favor. Even Barb’s tiny dog Cheese Puff has no objections—undaunted by size, he’s infatuated with Dave’s partner Lola, a drug-sniffing Golden Retriever.

Then Dave uses the P-word. And Barb’s luck leaves town.

Her car breaks down, her domineering sister comes for a visit, the condo manager plots to ban dogs, her jailed ex-husband begs her to be a character witness at his trial, a computer hacker creates chaos at the high school, and a hulking thug threatens violence.

Just when it appears things can’t get worse, Lola sniffs out a package in her car and a drug dealer decides Barb and Cheese Puff are his tickets out of trouble.

Thanks for talking with us today Carolyn. Now I have finished shuddering at the picture of you stepping over a live (it may have had one eye open whilst it was dozing!!!) ‘rattler’, I should just add that my own encounter, although not with quite such a deadly snake, was scary enough, given that we were in a foreign country and had no idea what the heck variety of  the creature it actually was, let alone whether it was poisonous or not!

Don’t forget that to be in with a chance of winning an e-copy of ‘No Substitute For Money’, you need to leave your comment now, with a link to your contact page …. ‘Good Luck’ to everyone who enters!

Written by Yvonne
36 comments
‘No Substitute For Money’ … Giveaway Winners!
FacebookTwitter
Guest Post By Nancy Klann-Moren, Author Of ‘The Clock Of Life’