“He strikes at random. His motive unknown. No one is safe…”
‘Motive X’
By Stefan Ahnhem
Blog Tour

Thanks to the lovely Vicky, this time with her Head of Zeus hat on, for inviting me along on this Blog Tour.

Thanks as always, also goes out to the great crew at NetGalley, for their always seamless downloads.

As an extract based Blog Tour, there are some lovely sites to visit along the way, so it is up to you just how much, or how little, you want to read of the book, before deciding whether or not to make your purchase. 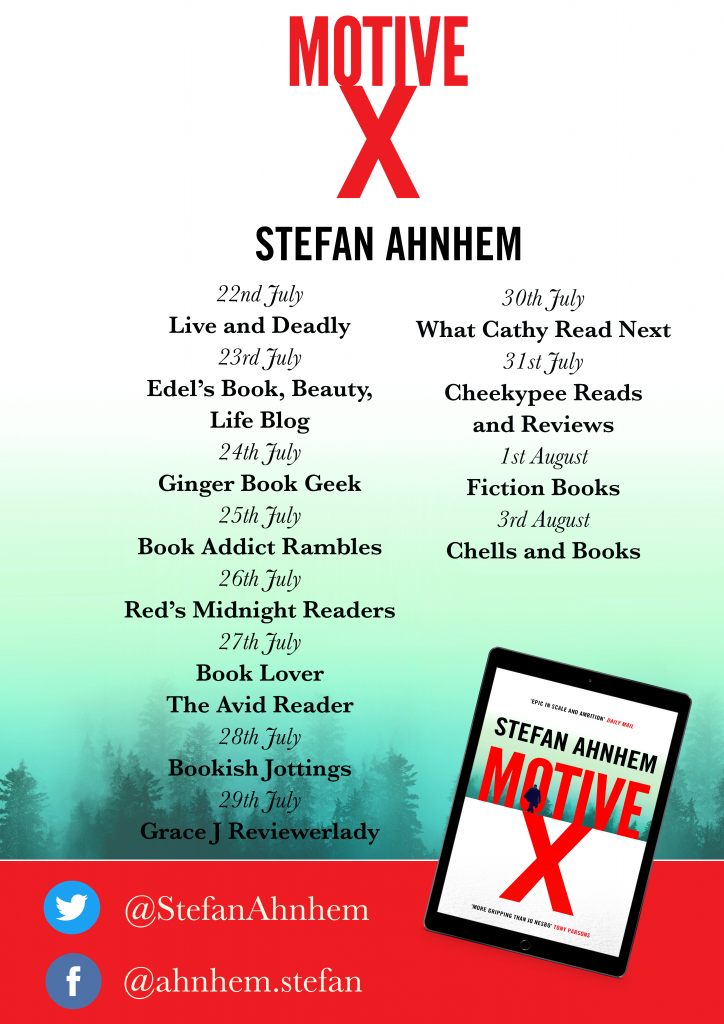 He strikes at random. His motive unknown. No one is safe…

Helsingborg police must solve the unsolvable.

A wave of apparently random homicides is sweeping through their idyllic seaside town. The murders have no pattern, no order, no reason. The perpetrator is immune to psychological profiling; forensically untraceable; utterly invulnerable to modern police techniques.

The body count is growing.

But lead investigator Fabian Risk is distracted by his mission to expose a corrupt colleague, and his boss Astrid is spiralling back into addiction. As the hunt for the solution becoming ever more desperate, their tight-knit team begins to unravel… 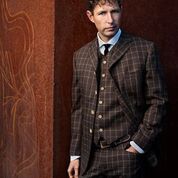 Stefan Ahnhem (b. 1966) is one of the most successful new voices to appear on the Scandinavian crime fiction scene in recent years.

A screenwriter with over two decades of experience, he has worked on a variety of projects, including adaptations of Henning Mankell’s Kurt Wallander series.

Stefan has, since his debut in 2014 with Victim Without a Face, the first book in his highly successful Fabian Risk series, built an authorship where the suspense and atmosphere of Nordic noir is combined with the cinematic qualities of screenwriting.

Stefan also serves on the board of the Swedish Writers Guild.

He lives in Copenhagen.

The publisher and author, have requested that I share the following extracts, as my stop on the Blog Tour.

Seen from above, the area between Klippan and Kvidinge was nothing but an open wound in an otherwise beautiful landscape. Instead of a harmonious jigsaw puzzle of fertile fields in various shades of green and rapeseed yellow, the area looked like someone had deliberately attempted to destroy that idyll.

Since Kvidinge Stone Crushers first broke ground there in 1963, the company had continued to dig deeper and deeper into what was now an area the size of fifty football fields. Voices had been raised to stop the devastation and replace the quarry with something else. But so far, none of the suggested fairgrounds, music festivals or shopping malls had been given the green light.

For that reason, Kvidinge Municipality had, while waiting for a proposal everyone could get behind, opened a temporary refugee reception facility in one of the many pits the diggers had left in their wake. The facility, which consisted of a number of interlinked two-storey barracks whose first floors were served by external staircases, occupied only a fraction of the pit. Even so, it housed one hundred and eighteen asylum seekers, most of whom were on their way to bed when the four-wheel pickup slowly rolled down into the pit with its lights off.

The three men wore dark clothes and their soft trainers made practically no sound in the gravel. They clearly knew exactly what they were doing; they fanned out and surrounded the facility, each carrying a jerry can.

As though psychically linked, the three of them undid the caps of their cans almost simultaneously and started dousing the wooden façade, which had only received a simple primer coat. The glistening petrol ran down the wooden cladding and either dripped on to the gravel or was absorbed by the concrete plinths. The window sills were given an extra dousing, and with the help of nail guns equipped with silencers, the front door was bolted to the frame with seven-inch nails. Then the three men each took out a lighter. The entire operation took no more than three minutes. The rest was chemistry.

It was over two hundred years old, made of white marble in the shape of an icosahedron with a surface consisting of twenty equilateral triangles. Twenty sides, each with an engraved number, apart from the number ten, which had been inscribed with an X.

Since the gilding of the numbers had long since worn off, a stranger would have to touch the grooves or hold the dice up to the light to see the result. He, by contrast, had long since learned to recognize the different sides from the patterns in the marble.

It was by far his most valuable dice and as always when he picked it up from its bed of cotton wool, he was struck by how heavy it felt in his hand. But then, that seemed fitting for the dice he used for the first roll, which set everything else in motion. Without it, nothing.

He cupped his hands around it and began to shake it.

Two or higher. That was all he needed to be allowed to take on a new mission. Which of the nineteen sides ended up face-up determined the number of days, counting from today. The only number he mustn’t roll was one. If, against all odds, that side faced up, he would have to abort the whole thing and none of what he had prepared and looked forward to would happen. The fun would be over before it had really begun.

The police hadn’t even found the body from his mission in Klippan yet, the first in what he hoped would be a long, beautiful string of missions.

It had been several weeks already, and so far there had been no reports of the dead old man. Apparently, no one missed him. And then there was the fact that the body was in a long, hermetically sealed plastic tent and therefore didn’t emit the foul reek of death.

The cocoon-like tent had been his response to the dice’s chosen cause of death: asphyxiation, and it had proved to be a trickier endeavour than he’d originally thought. After a number of failed attempts, he had settled on a construction consisting of two bicycle wheels fastened to either end of a six-and-a-half-foot-long steel pipe.

The unconscious man lying on the living room floor hadn’t measured more than five feet ten inches, so he had fitted nicely between the wheels, and he had secured the man’s neck, arms and legs to the steel pipe with various straps.

Then he had put a big, transparent plastic bag over one wheel and the man’s head and another one over his feet and lower half. He had taped the openings of the two bags together with duct tape. The bicycle wheels at either end had kept the plastic reasonably taut and after three layers, he felt satisfied it was airtight.

Pleased, he’d sat down on the floor and waited. It wasn’t something the dice had ordered him to do. He had fulfilled its requirements and was mostly just curious how the man would react when he woke up from the blow to the back of his head, and how long it would take for the carbon dioxide to make him pass out again.

The old man had woken up much sooner than he had expected and as soon as the first shock wore off, he’d tried to free himself, until he realized that was impossible. Then he had proceeded to writhe around instead, in a desperate attempt to punch a hole in the plastic cocoon.

Luckily, he’d had the foresight to tape up the man’s mouth, so he wasn’t able to bite, though in all honesty the original purpose of the tape had simply been to spare him from having to listen to his screaming. Because scream is what he’d done, almost continuously, until he had passed out again, three and a half hours later.

The whole thing had been a tremendous success. He’d been so fired up, he’d needed a twenty-kilometer run before being able to relax in a hot bath.

Written by Yvonne
2 comments
In conversation with …
Vivian Barz
Author of
‘Forgotten Bones’
FacebookTwitter
“How much will one man risk to solve the unsolvable?”
‘Solving Cadence Moore’
by Gregory Sterner
Mailbox Monday