I seem to be on something of a mini roll of legal thrillers just recently and boy, have they all been good!

Also, author Chad Zunker, for agreeing to stop by with this lovely guest post.

I look forward to reading An Equal Justice very soon! 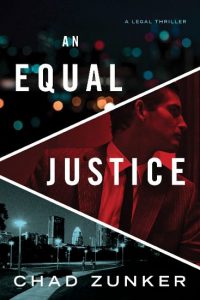 It follows David Adams, an ambitious Stanford graduate who has just begun a fast-track career at Austin’s most prestigious law firm. It’s a personal victory for the rising superstar—and a satisfying reversal from his impoverished and despairing childhood. Now David has the life he’s always wanted: an extravagant salary, a high-rise condo, a luxury SUV, and no limit to how far he can go in the eyes of the top partners.

But after the shocking suicide of a fellow associate—one who, in his final hours, offered David an ominous warning—David feels the pull of the dark and powerful forces behind the corporation’s enviable trappings.

The suicide leads unexpectedly to David’s discovery of a secret enclave of Austin’s homeless community, where he can’t help but feel an affinity to these outcast souls. Nor can he ignore the feeling that they hold the key to the truth behind a dark conspiracy.

When one of his new street friends is murdered, David’s doubts about his employer start shifting into a dark reality. Now torn between two worlds, David must surrender all that he’s achieved to fight for a larger cause of justice—and become his firm’s most dangerous acquisition.

Hi! I am CHAD ZUNKER 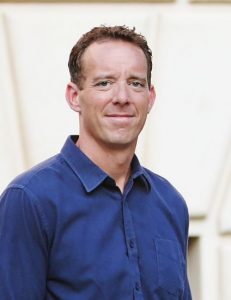 I studied journalism at the University of Texas, where I was also on the football team.

I have wanted to write full time since I took my first practice hit as a skinny freshman walk-on from a 6’5, 240 pound senior All-American safety — which crushed both me and my feeble NFL dreams.

I have worked for some of the country’s most powerful law firms and have also invented a range of baby products which are sold all over the world.

I am the author of the bestselling Sam Callahan thriller series and I am now hard at work on the next David Adams legal thriller.

I live in Austin, Texas with my wife and children.

IN CONVERSATION WITH AUTHOR CHAD ZUNKER

Q: You yourself have worked in the legal field. Did any of your own experiences in law provide inspiration for David Adams or his work at a prestigious Austin law firm?

A: Absolutely. Early in my career, I had the opportunity to work at one of the most wealthy and powerful law firms in the country. I saw outrageous amounts of money being thrown at top graduating law students in hopes of enticing them to the firm. These young lawyers were under immense pressure. I would often come into the office early and find first-year associates asleep at their desks because they’d worked through the night. I watched secret meetings happen between partners as they made clandestine power plays for firm leadership—it was like watching the TV show Survivor. And then I had a front row seat as this prestigious, 80-year-old law firm completely crumbled to ashes—the final result of incredible greed and dark power struggles among the partners.

Q: Like Sam Callahan in your previous book series, David Adams comes from a difficult past and has demons he is constantly trying to outrun. What is it that draws you to characters like Sam and David?

A: I’m drawn to stories where the underdog overcomes incredible odds. My father died from cancer when I was a teenager. That wound ran deep and immediately placed a series of significant emotional hurdles in front of me. So I relate well to young characters like David Adams and Sam Callahan who are struggling to find themselves, to find reasons behind their pain and their loss, and who are searching for ways to overcome all of that and still make something of their lives.

Q: Over the course of the novel, David discovers a lot not only about the others in his life, but also about himself and his own values. How did you go about balancing that undercurrent of self-discovery with the fast-paced plot of such an action-packed novel?

A: I’ll admit it was a challenge. So much of David’s story was my own story, so writing this book felt deeply personal to me. It changed my life when I discovered the underground world of the homeless in Austin more than a decade ago. It was a magical time of clarity for me. Many of the pursuits I’d always believed would make me happy began to fade to the back as I started to build authentic friendships with my new street friends. I wanted David to go on a similar journey while also placing him in the middle of a dangerous conspiracy. That was tricky, as I had a tendency in early drafts of the manuscript to lean too heavily into the self discovery. Fortunately, I have two incredible editors (Liz Pearsons and Charlotte Herscher) who both worked closely with me to keep those components in proper balance.

Q: The city of Austin is so prominent in An Equal Justice, to the point that it’s almost a character unto itself. It’s also where you live. Was it a challenge to make the city come alive in your pages in a way that felt true to life? What makes Austin such a compelling setting for a story like this?

A: One of the most meaningful and satisfying parts of writing this book was setting it in Austin. I have so much love and affection for my city. The challenge was not in making it come alive on the pages; the challenge was in not turning the book into a tour guide. Austin is like an onion with never-ending layers. I’ve lived here for more than 25 years and still find myself inspired by discovering something new. The streets are overflowing with creativity—with so many talented writers, artists, and musicians. I also love how so much of this city’s unique essence can be found within a small radius around the heart of downtown. It allowed me keep the story intimate in setting while not feeling limited in the environments where I wanted to take David. Austin is also a city that has made the plight of the homeless a central issue moving forward.

Q: You’ve spoken about your involvement with nonprofits in Austin that serve people experiencing homelessness and about your hope that through characters like Benny, your fiction will help remind readers of the humanity of those living on the street. How did you decide to bring these themes into your writing, and can you tell us a little bit more about your work with the Community First! Village in Austin?

A: The seed for An Equal Justice was planted 13 years ago when I walked into a secret homeless camp and found a dozen guys who were willing to embrace me as one of their own. I remember walking away from that experience not only feeling incredibly moved but also thinking there might be something unique there for a future book. I’d always dreamed I could one day write a book that might move readers in ways that went beyond just entertainment. I took that chance with An Equal Justice. It’s meant so much to me that my amazing publishing team has rallied around the heart of the book.

Community First! Village is a dream that began around the same time that I first visited the homeless camp. My wife, Katie, had just taken a job as the CFO of Mobile Loaves & Fishes, an incredible Austin nonprofit that serves the homeless. The Village was the brainchild of Alan Graham, the founder of the nonprofit and a man of incredible vision, who believes that housing will never solve homelessness but community will. So locking arms with Alan, my wife and I (and many others) went on a difficult and exhausting 10-year journey to bring this vision to life in Austin. The result has been an overwhelming success—a 51-acre master-planned community that provides affordable, permanent housing and a supportive community for the chronically homeless that has already became a national phenomenon. So far, we’ve lifted nearly 200 formerly homeless individuals off the streets and expect 350 more to join them over the next couple of years. Being a part of creating this community and continuing to champion the cause has been the thrill of my life. The Village is truly the most amazing place on the planet.

Q: We know you’re already hard at work on the second David Adams legal thriller, so can you give readers a little tease about what’s next for David? What can they most look forward to in this next installment in the series?

A: Without giving too much away, David finds himself representing a homeless character who hears voices in his head and believes the CIA is after him. But the crime is not a simple street issue—it’s the murder of a county prosecutor who just happens to be one of David’s law school friends. I’m really excited for readers to continue to follow David’s journey as he takes the next step in his career and personal life.

25% done with The Lies You Told, by Harriet Tyce 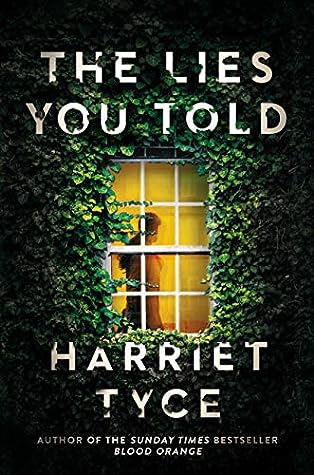 Yvonne (Fiction Books)‘s Reading Progress for The Lies You Told - 1 hour, 40 min ago

As the sun sets dreams of coastal adventures roll in.

Alistair S wanted us to drop by Wembury in Devon for this evening’s virtual visit. Where are you dreaming of seeing? 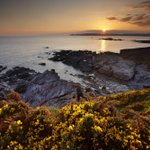