I am pleased to be kicking off what looks to be, a very extensive Blog Tour for this book and once again the combination of Aria Fiction and NetGalley, have come up with a winning formula. Added to which, author Theresa Talbot, has forwarded copy of this excellent Guest Post to get the ball rolling. 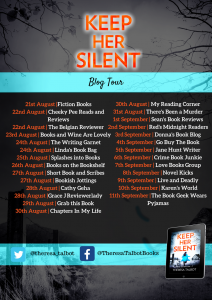 ‘Do that which is good and no evil shall touch you‘

That was the note the so-called Raphael killer left on each of his victims.

Everyone in Glasgow – investigative journalist Oonagh O’Neil included – remember the murder of three women in Glasgow which sent a wave of terror through the city. They also remember that he is still at large…

When the police investigation into the Raphael killings reopens, Oonagh is given a tip off that leads her straight to the heart of a complex and deadly cover-up.

When history starts to repeat itself, it seems the killer is closer than she thinks.

Could Oonagh be the next target…?

Hi! My Name Is THERESA TALBOT

As Theresa Talbot, my hobbies include gardening, yoga, making soup and playing around with different font settings.

Hi, thanks so much for inviting me along. I’m Theresa Talbot and Keep Her Silent is the second in the Oonagh O’Neil series. There are three strands running through the narrative; the unsolved Raphael Killings from the 70s, a woman incarcerated in a secure unit for killing her husband and son, and the tainted blood scandal, where thousands of patients across the world – including children – were infected with HepC and HIV through contaminated blood products.

Although Keep Her Silent is a work of fiction, this part of the story (tainted blood), is based on real characters and real life events. I’ve worked closely with one of the victims and sadly his story is one of nightmares. I’m a radio journalist, so have long been familiar with the details of this, but I’m almost ashamed to say I didn’t fully grasp the full extent of the story – where the profit of pharmaceutical giants was put before human-kind. It has wrecked lives, ripped families apart and destroyed victims hopes and dreams for the future. For me it’s more than a scandal, more than a tragedy – it’s one of the biggest and most preventable crimes of the 20th century and beyond.

My central character, Oonagh O’Neil is a journalist, and like most people had always regarded the tainted blood story as just another medical negligence story – an unlucky role of the dice. But when she starts to uncover the criminal activity surrounding the whole affair she’s like a dog with a bone, and refuses to stop, despite putting her own life in danger.

I like Oonagh, she’s flawed and troubled and often gets it wrong, but she’s always willing to fight for the underdog, and readers tell me they can relate to that. She’s grown and developed somewhat since our first encounter with her in The Lost Children. Things happened to her in that book that have impacted on her life, and she’s taken stock. To the outside world she has a charmed life; great job, seems confident and has no obvious money worries, but underneath chaos reigns. We all know that scratch the surface of any ‘perfect life’ and there’s a whole lot more to be revealed. I’d like to say she’s a bit more grown-up now, but hasn’t lost any of her edge. She could still cut an enemy in two with her tongue!

Oonagh is single, and one reader asked me when she was going to find ‘true love’. To be honest, I’m so rubbish at writing romance that poor Oonagh may be single for a long time yet. The one thing I wanted to avoid was having her look for Mr Right. There’s so much more to her character than looking for a boyfriend – that said, her Mum wants her to settle down and comes out with some cracking one liners in regards to that …. and there is always a certain cop on the sidelines to keep us guessing.

Keep Her Silent, like my last book is set in Glasgow, and to me the city is like a character in its own right. The setting of any book is crucial, and readers expect that setting to have a personality all of its own. The personality of Glasgow is very different from Edinburgh, Dundee, York, London. The dialogue is unique and people respond to their surroundings in a certain way. I’m always really impressed when authors use fictional towns and cities. That just seems too much like hard work. For me I wander around my home town and take in all it has to offer. I eavesdrop conversations on the bus, make up back-stories to strangers in the street and have imaginary scenarios played out behind closed doors. No wonder it takes me so long to nip down to theshops!

Despite the dark subject matter of Keep Her Silent, the book is injected with humour. To me that’s important – as in life we often use humour to shed light on tragic situations; otherwise it would become too heavy.

I felt such a huge responsibility to everyone affected by the contaminated blood scandal – it was important that I told their story. Thankfully, so far, it’s had a very positive response.