‘Last Of The Summer Moet’ By Wendy Holden

Phew! As February draws to a close, I am publishing my last post in what has been for me, a marathon run of Blog Tours. I don’t even mind about it not being summer, a glass or two of that Moet sounds good to me, just to round off the month 🙂 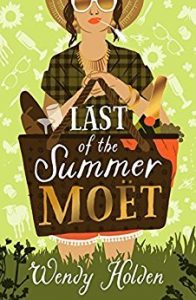 Laura Lake, deputy editor of glossy mag Society, has been promoted to the hot seat while her boss recovers from ‘exhaustion’ in rehab.

Finally she’s in charge, but who can she share the free jollies with?

But not everything in her guitar-shaped garden is lovely; Lulu’s attempts to join the hunt, act in the panto and grow the biggest marrow are blocked by the snobbish locals.

Who does she call on for help? Journo extraordinaire, Laura Lake…

For Laura this is  journalistic gold. She’s discovered a super-exclusive English village where the rich and famous own weekend retreats. Where film stars, Turner-prize winners and Cabinet ministers park their helicopters outside the gastropub and buy £100 sour dough loaves from the deli.

Outsiders are strictly forbidden, but the door to this enchanted rural idyll has opened for Laura, revealing a great professional opportunity. Can Laura write an exposé before the snobbish villagers suss her true identity? And before the world’s poshest pub quiz triggers a political scandal not seen since Profumo? 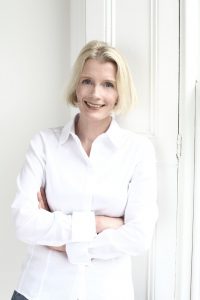 Wendy Holden grew up in Yorkshire, and studied English at Girton College, Cambridge.

She worked in magazines for many years before joining Tatler’s in 1997 as deputy editor, later moving to the Mail on Sunday’s You magazine, which she left in the early 2000s, to concentrate on writing her novels.

Wendy still considers journalism to be her trade, so she likes to keep her hand in by regularly writing features and reviews for newspapers and magazines on a range of social, topical and lifestyle subjects. She is also a television and radio contributor.

She now lives in Derbyshire, in a former Victorian gardener’s lodge built in the shape of a tiny castle, where she works in a small green summerhouse in the garden.

Check out all the latest news at Wendy’s website

My bottom drawer isn’t so much full of unpublished novels as half-published ones. I’m a bit of a literary tomb-raider and am constantly stripping the corpses of works I once thought dead and buried for jewelled and glittering bits of detail such as interiors, conversations and sometimes whole characters to embellish whatever book I am working on at the moment.

Aria Fiction and Wendy Holden have chosen this short extract from ‘Last Of The Summer Moet’, for me to share as my contribution to the Blog Tour.

The lines are from Chapter One of the book …

Laura Lake, deputy editor of Society magazine, returned to her desk after the daily features meeting. She felt as if she had done ten rounds with Floyd Mayweather. Glancing round at her colleagues as they slunk back to their workstations, she could tell that they felt the same.

Raisy and Daisy, the interchangeable blonde sisters who shared the job of fashion director, were looking particularly crushed. Their ideas about furry lederhosen had not got past first base, still less their suggestions for directional glittery clogs. Raisy (whose name was actually Rosie, but it had taken Laura some time to realise), was dabbing at her eyes with a sequinned Chanel hanky. The fine dark brows of Thomasella the food editor were angrily drawn as well. Her contention that Bronze Age party food – i.e. Ritz crackers and cheese hedgehogs – was back had been thrown on the same pile as the lederhosen.

Admittedly Carinthia, Society’s mercurial editor and Laura’s boss, had always been demanding. ‘The Gaze’, her famous death stare, had always had the power to reduce her staff to rubble. This was all the more remarkable given that none of them could actually see it. The opaque black sunglasses Carinthia habitually wore were, alongside those of Anna Wintour of American Vogue, the most terrifying eyewear in journalism.

But people had respected this ruthlessness. Carinthia, they knew, demanded the best. Only the cleverest ideas  made the cut, which was why the magazine was so successful. Those not equal to this quest for perfection could be summarily fired, like the style editor who had said neon-pink-sprayed midges were summer’s smart garden accessory.

But of late Carinthia’s demands had taken on a new, lunatic edge. Staff had been told to position their chairs exactly eight centimetres from their desk edge whether or not they were sitting in them and never, upon pain of death, hang anything on the backs. Untidy desks were photographed, named and shamed, including Laura’s. Especially Laura’s, the untidiest in the office.

More bizarrely still, according to Demelza, Carinthia’s long-suffering PA, the editor had recently started consulting an astrologer. ‘She goes up to her roof and sits under a blue plastic pyramid,’ Demelza confided. ‘Then she’s told which days are to be avoided.’

Demelza had showed Laura the diary. Days to be avoided had been blacked out, and Carinthia didn’t come in on them. There had been many black days lately, leaving Laura running the ship. While Laura enjoyed being in charge, and things tended to go smoother when she was, it was irritating to have the editor come back and take credit for her efforts. Or, worse, change her arrangements and cancel the features she had commissioned.

But there was one feature Carinthia would not be cancelling. One that had survived the recent meeting unscathed. Laura’s coming interview with Savannah Bouche, the vastly famous and stunningly beautiful Hollywood actress and humanitarian.

Laura had set the interview up herself and was hugely proud of having done so. All Society’s glossy rivals had been after it too; to secure it was a coup. Laura secretly hoped she had pulled it off thanks to her growing journalistic reputation. The‘Three Weddings and a Scandal’ story had shot her into the magazine stratosphere, and the adventures of the ‘Luxury Press Trip’, in which a billionaire businessman had been unmasked as a charlatan, had only burnished her credentials further. An in-depth report of an encounter with one of the world’s most famous women would be the perfect continuation of what was promising to be a stellar career…..

It’s odd; I have no memory for everyday things at all, but I work on my books so obsessively that entire sequences I wrote years ago stay lodged in my brain. So I know where to look for them when I want to grave-rob. My bottom drawer is one of my most important sources of material!