I would like to thank the lovely Penny, representing Author Marketing Experts, Inc., for introducing me to the delightful author of this trilogy, Lori Matthews.

As my review schedule is very full right now, I shall be reading the third and final book ‘Hit and Run’, as Lori assures me that they work perfectly as stand alone stories.

I’ll let you have a look at the complete trilogy though, just so you get the full picture about this series of romantic thrillers, and you might also want to check out Lori’s lovely guest post below. 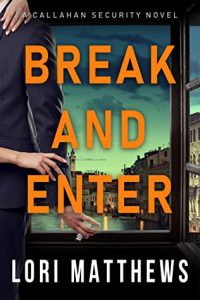 Callahan Security is on the brink of disaster. Mitch Callahan pushed his brothers to expand the family business into private security, and their first major client is a complete pain in the ass. It’s no wonder the man has a target on his back, but nothing could prepare Mitch for how seductive his adversary is.

Love hurts. No one knows that better than Alexandra Buchannan, so she uses her talents as a thief to equalize the scales of romantic justice. Your ex still has your favorite painting? Not for long. Alex’s latest job is her biggest challenge yet. Her target just hired a new security company, and the team leader is as smart as he is sexy.

Mitch knows he’s jeopardizing not only this job but the future of Callahan Security. If only he didn’t find Alex so damn irresistible. Soon their game of cat and mouse explodes into a million pieces. Unbeknownst to them, there’s another player in the game, and his intentions are far deadlier. 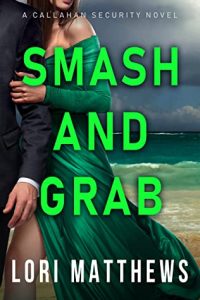 Logan Callahan, the CEO of Callahan Security, knows he’s out of his depth. The woman he came to the Bahamas to investigate was kidnapped, and he was taken right along with her. He knew the sexy lady lawyer was trouble. He just had no idea how much.

Taken. Again. Lacy Carmichael on the other hand, was not new to the “Kidnap and Ransom” game. After all, when your father was one of the largest arms dealers in the world, danger comes with the territory, and she’d learned how to talk or fight her way out of almost anything. But this time Logan was grabbed with her, so she’ll have to reveal all her secrets in order to save both of their asses.

Searching for a way out of the mess, and fighting their mutual attraction, will take all of Logan’s and Lacy’s collective skills. Unfortunately, deception and betrayal by those they trust the most changes the rules of the game, and they find themselves battling for both their lives and their love.

First, I want to say thank you so much to Yvonne for inviting me to her site. It’s such a pleasure to be here!

For those of you who don’t know me, my name is Lori Matthews and I write what I like to call romantic thrillers, as I am a true product of my upbringing!

I grew up in Nova Scotia, Canada, in a house filled with books and readers. Some of my fondest memories are of reading in the same room with my mother and sisters, arguing about whose turn it was to make tea. No one wanted to put their book down!

I was introduced to different genres because of my parents’ habit of leaving books all over the house. My mother read romance and my father read thrillers. Hence the romantic thrillers which I now write.

After two degrees, a career as a librarian, a husband and two kids, I attended a workshop in Tuscany that relit that spark for writing. I’ve been pounding the keyboard ever since.

Today, as a family, we live in New Jersey, with a crazy dog and a cranky cat.

“WELCOME TO MY WORLD“

“My latest book Hit and Run is coming out on August 4th and I am so exited! It’s the third book in my Callahan Security series. It can be read on its own but if you’re like me, you will want to start at the beginning of a series with Break and Enter followed by Smash and Grab.

Hit and Run was by far the hardest book for me to write. Gage, the hero, is definitely what I would call the strong, silent type. He’s also quite cranky! Dani, the heroine, is used to keeping to herself. Sometimes getting these two talking was quite a task.

So, I’m going to let you in on a secret. I do not control my characters. They control themselves and sometimes, me. I would love to be one of those authors who can plan a book from start to finish with detailed notes on every chapter. I’m just not. Those amazing people are called plotters.

The flip side of this is called being a pantser, meaning you fly by the seat of your pants. I am somewhere in between. I have a few points I want to hit in the story but for the most part I just sit back and let the characters take me where they want to go.

Hit and Run was definitely a book where the characters were in control. I had some ideas about where I wanted to set the story and how I wanted it to begin. Gage and Dani said ‘no’. Seriously.

I originally started the story in Sweden. I had the first few chapters written and then silence. My characters wouldn’t talk to me. When that happens, I know I’m on the wrong track. I sat and thought about it for a while and then I stopped thinking about it. About two weeks later I sat down and started the story again. In Alaska. I have no clue why, but that’s what happened.

There’s a scene in the first couple of chapters where Gage is pacing around Dani’s cottage. That’s what was happening in my mind. I now have my characters trapped in an Alaskan town with the baddies, and a major storm is moving in. How were they going to get out? I had no clue until a random idea popped into my head. You’ll see what it is when you read the book but it’s not exactly your normal speedy getaway.

If that sounds crazy, well welcome to my world. My husband tells me all the time, my mind is a scary place. He’s not wrong.

I hope you enjoy reading Hit and Run as much as I enjoyed writing it. It truly was a labor of love.

Be safe and stay healthy.