“My First Crime Read”
A Guest Post By Rachel Amphlett

I am pleased to be part of the blog tour, organised to promote author Rachel Amphlett’s latest crime thriller ‘Scared To Death’, the first book in the Detective Kay Hunter series.

To mark the part of Fiction Books in this extensive undertaking, Rachel has provided this great guest post, which really interests me, as I can relate to so much of what she is saying from personal experience. In fact I could have pretty much written this about myself, although unlike Rachel, I have not gone on to secure a much respected and recognised place in the crime thriller genre, good enough to rival that of hers and my own, debut adult author; and I’m not sure that my father ever knew about the extra person reading his library books! 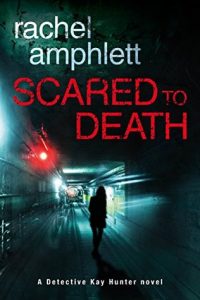 A serial killer murdering for kicks…

Check out those all important ‘First Lines’ here

Pre 2005 I lived in the UK, where included in a varied employment portfolio, I helped run a pub, played guitar in bands, worked as a television and film extra, dabbled in radio as a presenter and freelance producer for the BBC and worked in publishing as a sub-editor and editorial assistant.

I now call Australia home and proudly boast my dual passport status, although I am a voracious traveller, notching up 15 different countries to date … and counting!

I even manages to find time for a few more hobbies, including skiing, horse riding, going to the cinema and playing guitar. I am also a member of the International Thriller Writers and the Crime Writers Association.

An advocate for knowledge within the publishing industry, I am always happy to share my experiences to a wider audience through my blogging and speaking engagements.

The first crime fiction book I recall reading was Nerve by the late Dick Francis.

My mum had an old second hand copy on the bookshelf in the living room at home when I was about 12 or 13, and I’d outgrown all the books available to 12-year olds at the time (there were no Hunger Games back then!). Bored, I started to browse my parents’ bookshelves and mum, seeing me pull out paperback after paperback, took pity and handed me the copy of Nerve. The opening line gripped my over-active imagination, and soon I was devouring the rest of the story.

Dick Francis novels are often considered to be “cosy mysteries”, and that’s a huge mistake.

Nerve is a psychological thriller as good as any – Francis was writing them before the genre name had even been coined. It has a fast-paced plot, plenty of chilling moments, and a killer who has a unique “hands off” approach to his victims. It’s a very, very clever piece of writing. There are no police detectives in this story. Once the protagonist, a jockey whose rise to fame has been meteoric due to his rivals’ demise, finds himself being targeted, he starts to question everything that has happened around him for the past few months – a colleague committing suicide; rumours swirling around the racing industry that destroy another jockey’s career. When he finally realises who is behind the cruel scheme, he sets out to wreak his revenge – and prove once and for all that he hasn’t lost his nerve.

For me, being able to read crime fiction at such a formative reading age that had a strong connection with where I grew up was an added bonus. We were surrounded by racing stables in the Berkshire countryside where I lived, and that’s where most of books are set. After devouring Nerve I spent all my birthday and Christmas book tokens over the following years completing the back catalogue of Francis’ novels. I still have them, and recently re-read Nerve for the first time in about five years. It remains a thrilling read.

Rob Finn was a bit of a misfit: a struggling young jockey in a family of accomplished musicians, a man in love with a beautiful woman who wouldn’t have him — he suddenly looked like a rider who had lost his nerve. Could it be, though, that the horses were unusually sluggish, and that there was something more sinister attempting to sabotage him…?

Added to the history of my reading all of Dick Francis’ books in my teens was the discovery at the same time that while my dad had been a postman before I was born, he’d delivered the post to the Francis’ household in Blewbury, Oxfordshire – including the annual Christmas telegram from the Queen Mother. Upon hearing that I’d be meeting Felix Francis, Dick’s son at CrimeFest earlier this year, my dad said to me “Tell Felix I remember him in short trousers”.

I did, and a delighted Felix Francis signed a copy of Crossfire for my dad with the line “To my postman”.