The dream team of Aria Fiction and NetGalley are back with another comprehensive Blog Tour schedule for one of their most popular of authors, Karen Osman.

Karen has already sent me copy for previous Guest Post spots, so this time I have been allocated an extract passage to fill my slot, with my excerpt coming from Chapter One of the book. 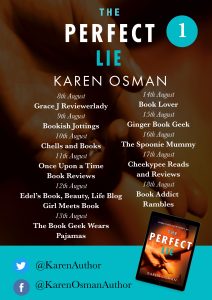 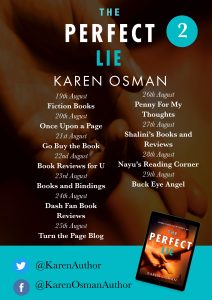 Nothing has felt right since she told the lie…

Claire Carmichael leads a charmed life. She has two beautiful sons, Jamie and Joshua, and a handsome and successful husband who loves her. She has been taught well by her mother – the most important thing Claire has is her good reputation.

He said, she said…

Even when she was in school, Claire had it all. She was clever, likable, and after passing the initiation tests, she was welcomed into the society of popular girls – The Queen Bees. So when a scandal threatened to ruin Claire’s reputation, the Queen Bees closed rank to protect her, no matter who else got hurt.

Claire may have moved on from her school days, but for one person who she hurt irreparably, those memories are as fresh as blood. And all it takes to reap their revenge, is ONE PERFECT LIE. 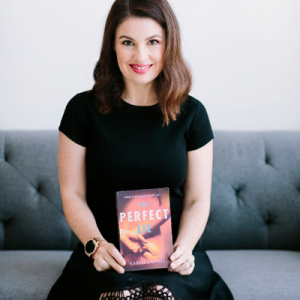 She was also included in 2017’s edition of ‘Ahlan’s Hot 100 People’, an accolade recognising the pioneers and game-changers shaping the UAE’s social and cultural landscape.

Karen founded niche communications company, ‘Travel Ink’ in 2011, providing content writing and strategy, public relations, social media, training, and translation services to hotels, airlines, and tourism establishments. In her role as Managing Director, she oversees a team of writers, editors, PR and social media consultants, to deliver quality content for exceptional results. As a testament to its success, ‘Travel Ink’ was shortlisted as a finalist for the ‘SME Advisor Stars of Business Awards’ in two categories (Hospitality & Tourism and Communications), just one year after the company’s inception.

She has been recognised for her achievements in the areas of entrepreneurship, luxury travel, and the written word and has featured in various regional and international publications including: Hello!, Stylist, Forbes, The National, Ahlan!, and Gulf News, to name a few.

Karen also holds a number of note-worthy positions including: Travel and Tourism Chair Person for the British Business Group, writer and moderator for Arabian Travel Market, and Vice-President of the Kaizen chapter of Business Network International.

She lives in Dubai with her husband and two young sons.

Claire’s husband strode through the front door and she observed him, trying to be discreet. It wasn’t difficult. His blue eyes were locked on his mobile phone, entranced as his thumb moved quickly across the screen. Having found what he was looking for, the spell was broken as Chris raised the phone to his ear, his attention finally coming to rest on her. Sorry, he mouthed as he rolled his eyes and she smiled at him, keen to show patience and understanding. She hoped that this, along with the warm smell of the simmering beef casserole, would soothe his transition from stressed employee to loving husband and father. However, she suspected it would take another couple of hours for him to relax.

She felt a warm hand on her knee and turned towards her youngest son, Jamie, who held a toy train in his outstretched hand. She took it automatically, knowing what was required, and absent-mindedly choo-chooed the train along the arm of the sofa. Despite still thinking about Chris and his mood, her effort elicited a squeal of delight from their five-year-old son, and whilst it wasn’t loud enough to drown out Chris’s aggressive-sounding conversation, it was loud enough for Chris to shoot her a warning glance. She knew what that meant – keep Jamie quiet until he finished his phone call. Her husband’s impatience and tiredness pervaded the air and Claire quickly placed a finger over her lips, whispering to Jamie to use their indoor voices.

As her son turned back to his trains, she sensed that tonight was not the right time to talk to Chris about her going back to work full-time. But when then? Maybe at the weekend when he might be a bit more relaxed? She quelled the flicker of impatience and silently counselled herself to bide her time – she only had one shot at this. Still, she was anxious. There were only a couple of weeks left of the summer holidays and she wanted to be full-time when Jamie started school. Plus, she had already confirmed with Julia.

That particular thought nestled uncomfortably. It was unlike her not to run something by Chris first, especially such a big change as this. She would have to talk to him tonight, and hope his mood improved. Claire looked at her son, his attention now captivated by some crayons and a colouring book. She knew that both she and Jamie were ready. She had put Jamie in playschool for a few mornings a week and he’d loved it but since he’d stopped his afternoon nap at two-and-a-half years old, she’d struggled to keep him occupied during the long afternoons. He seemed to need a lot more stimulation than other children, certainly more than her first son, Joshua, who had been content to sit and play with his toys by himself for hours on end. But Joshua would be eighteen next year, and then next September, he would be off to university. If his exam results this year were anything to go by, he would have no problem getting into Cambridge to study law.

Claire smiled as she thought of him, her firstborn, her pride and joy. She didn’t have favourites when it came to her sons – they were so different – but there was no doubt Joshua was a dream child. She’d rarely had a moment’s worry over him – well, apart from the difficult few months they’d had the previous year, but that seemed to have all passed, thank goodness. He’d always done well in school and was well liked with a good circle of friends.

Her nightmares of him doing drugs or falling in with a bad crowd had come to nothing during his early teenage years and she felt confident that he now had enough common sense to make good choices. She didn’t like to tempt fate by questioning her good fortune too much, but she secretly suspected it was perhaps because Joshua had had her all to himself for twelve years. When Jamie came along, Joshua had been old enough to help with the baby and, as a thirty-eight-year-old mother the second time round, Claire appreciated the help – especially as Jamie had been colicky. Her second son never seemed to settle easily, and his naps were sporadic to say the least.

Claire hadn’t realised just how difficult it would be with a second child and she’d felt permanently tired for two years. But as Jamie got older, it became easier and he doted on his older brother, sometimes even preferring Joshua to her. Some of her happiest memories were watching Joshua entertain his baby brother and she believed it encouraged Joshua to be gentle, and even more caring and loving than he already was.

Picking up her phone, she was about to scroll through some of her photos of her sons when she heard a loud crash coming from another room. Jamie jumped at the noise and Claire rose from the couch, or sofa, as her mother liked to call it, quickly going to investigate. Jamie trotted after her, a train in each hand as if ready to do battle with whatever had intruded on their playtime. She’d barely taken a few steps before she heard Chris shouting from his office and she stopped abruptly, Jamie bashing into the backs of her legs.

Shit, thought Claire, hurrying through to him. She had put the suitcase in his office, so he could lift it to the top shelf of the wardrobe. She would have done it herself, but she couldn’t reach. She didn’t think she’d left it where he could have tripped over it though.

Stepping into the room, she saw the suitcase, along with a small table and lamp, all on their sides. He must have kicked the suitcase out of the way with such force it knocked over the table.

‘Sorry, love, are you okay? Did you trip?’ she said now, careful to keep her tone neutral, conscious of Jamie standing in the doorway.

‘I couldn’t manage to lift it myself onto the top shelf of the wardrobe. Could you?’ she asked. ‘I’m not as tall as you,’ she added.

As she’d hoped it would, his anger dissipated, the compliment a pacifying balm on his irritation.

‘Sorry, love, bad day at the office again,’ he admitted, righting the overturned furniture, and Claire felt herself relax slightly at the acknowledgement.

Chris lifted the suitcase and she saw the strong muscles in his back, his slim waist, and powerful legs. At school, Chris had always been the best-looking boy and even now at forty-three, his good looks had only intensified with age, as had her attraction to him. Chris easily slotted the empty suitcase onto the top shelf, and she came up behind him, wrapping her arms around his chest. His body felt tense; the strain of his job etched onto his muscles. Turning around to embrace her, he kissed her on the forehead before turning to Jamie.

‘Come here, little man,’ he said to his son, bending down, and Jamie propelled himself forward almost tripping over his feet to get to his father. Claire watched lovingly as the two of them hugged. Releasing his son, Chris stood up…..