New On the Shelf At Fiction Books This Week

Your host for June 2013 is: bellezza over at ‘Dolce Bellezza’

So why not stop by, leave a link to your own Mailbox Monday post, oh! and don’t forget to leave a comment for Bellezza, after all, we all like to receive them!

This week’s enquiry was received from Matthias Schnellmann, over at Iridescent Publishing, the publishing house for all of William’s books and a place where you can go to check out their full synopses, together with some fascinating and critically acclaimed author articles documenting the way in which  human attitudes have shaped our species’ conquest-driven relationship with nature as a whole.

Plato’s metaphysical Atlantis mystery plays out on an archaeological dig on the island of Santorini.

It was the chance of a lifetime. A dream job in the southern Aegean. Apprentice to the great archaeologist Marcus Huxley, lifting a golden civilisation from the dead… Yet trading rural England for the scarred volcanic island of Santorini, 22‐year old Nicholas Pedrosa is about to blunder into an ancient mystery that will threaten his liberty, his life, even his most fundamental concepts of reality.

‘Then chalk it up to experience, Mr Pedrosa. Trust no one. Believe no one. Question everything. Remember, there is nothing here you can take at face value… No — not even yourself.’

An island that blew apart with the force of 100,000 atomic bombs… A civilisation prised out of the ash, its exquisite frescoes bearing a haunting resemblance to Plato’s lost island paradise, Atlantis… An archaeologist on a collision course with a brutal police state… A death that may have been murder… And a string of inexplicable events entwining past and present with bewildering intensity… Can this ancient conundrum be understood before it engulfs them all? 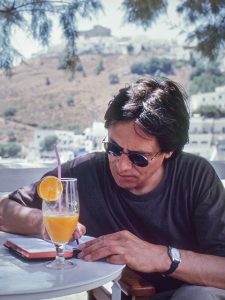 William Azuski (AKA William Miles Johnson), is of British and Yugoslav descent and was born and spent many of his formative years in the UK, where he studied ancient history and literature, before dropping out of college to pursue a path on the open road.

Travelling widely through the Mediterranean, his frequent sojourns in Greece included several months on Santorini in the 1970s, an experience that provided firsthand experience for this exceptional metaphysical mystery novel’s local setting.

Writing as William Miles Johnson, Azuski also called upon his Mediterranean experiences and close ties with the region, when he became involved in an international conservation project, to establish marine protected areas, in the then war torn Aegean. This led to the writing of  two non-fiction books, ‘The Monk Seal Conspiracy’ and the critically acclaimed ‘The Rose‐Tinted Menagerie’, both of which are in-depth investigations into the international trade in animals, some of which have been driven to near extinction.

William’s writing talents have also been extended, by a foray into an ‘End Of The World’ Black Comedy, titled ‘Making A Killing’, a witty but frightening expose  of man’s destruction of the Earth and his seeming indifference to the fate of all creatures but his own…