I was surprised and pleased to have author Tendai Huchu contact me again, with the request to read and review this, his second novel. I so enjoyed his debut book, ‘The Hairdresser Of Harare’ and have often wondered whether there would be more gems like it to come.

In ‘The Hairdresser Of Harare’, Tendai managed to blend just the right amount of social history about Zimbabwe, his country of birth, social comment about the lives of the Zimbabwean people in a typical community, together with just the right touches of humour and empathy. I therefore have very high hopes for this, his latest story, despite the rather tongue twister of a title 🙂

In his usual open and engaging style, Tendai has prepared a guest post which will be going to publishing in the next couple of weeks, so hopefully you will have the time to stop by and share ‘Ploughing My Own Furrow’

THE MAESTRO, THE MAGISTRATE & THE MATHEMATICIAN

Three very different men struggle with thoughts of belonging, loss, identity and love as they attempt to find a place for themselves in Britain.

The Magistrate tries to create new memories and roots, fusing a wandering exploration of Edinburgh with music.

The Maestro, a depressed, quixotic character, sinks out of the real world into the fantastic world of literature.

The Mathematician, full of youth, follows a carefree, hedonistic lifestyle, until their three universes collide.

In this carefully crafted, multi-layered novel, Tendai Huchu, with his inimitable humour, reveals much about the Zimbabwe story, as he draws the reader deep into the lives of the three main characters. 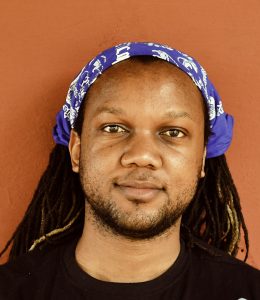 Tendai Huchu’s first novel, The Hairdresser of Harare, was released in 2010 to critical acclaim, and has been translated into German, French and Italian. His short fiction and nonfiction have appeared in The Manchester Review, Ellery Queen’s Mystery Magazine, Gutter, Interzone, AfroSF, Wasafiri, Warscapes, The Africa Report, Kwani and numerous other publications. In 2013 he received a Hawthornden Fellowship and a Sacatar Fellowship. He was shortlisted for the 2014 Caine Prize. His new novel is The Maestro, The Magistrate & The Mathematician.

Tendai is from a small mining town called Bindura in Zimbabwe, although home these days is Edinburgh, Scotland. His interests are reading – a lot, playing chess, and walking.

Catch up with the latest news on Tendai’s website

Read Fiction Books Review Of ‘The Hairdresser Of Harare’ here